Does it get any better than bacon + corn + a sweet & spicy honey chipotle glaze? This bacon wrapped corn is THE recipe that all your guests will be asking for after your next cookout! 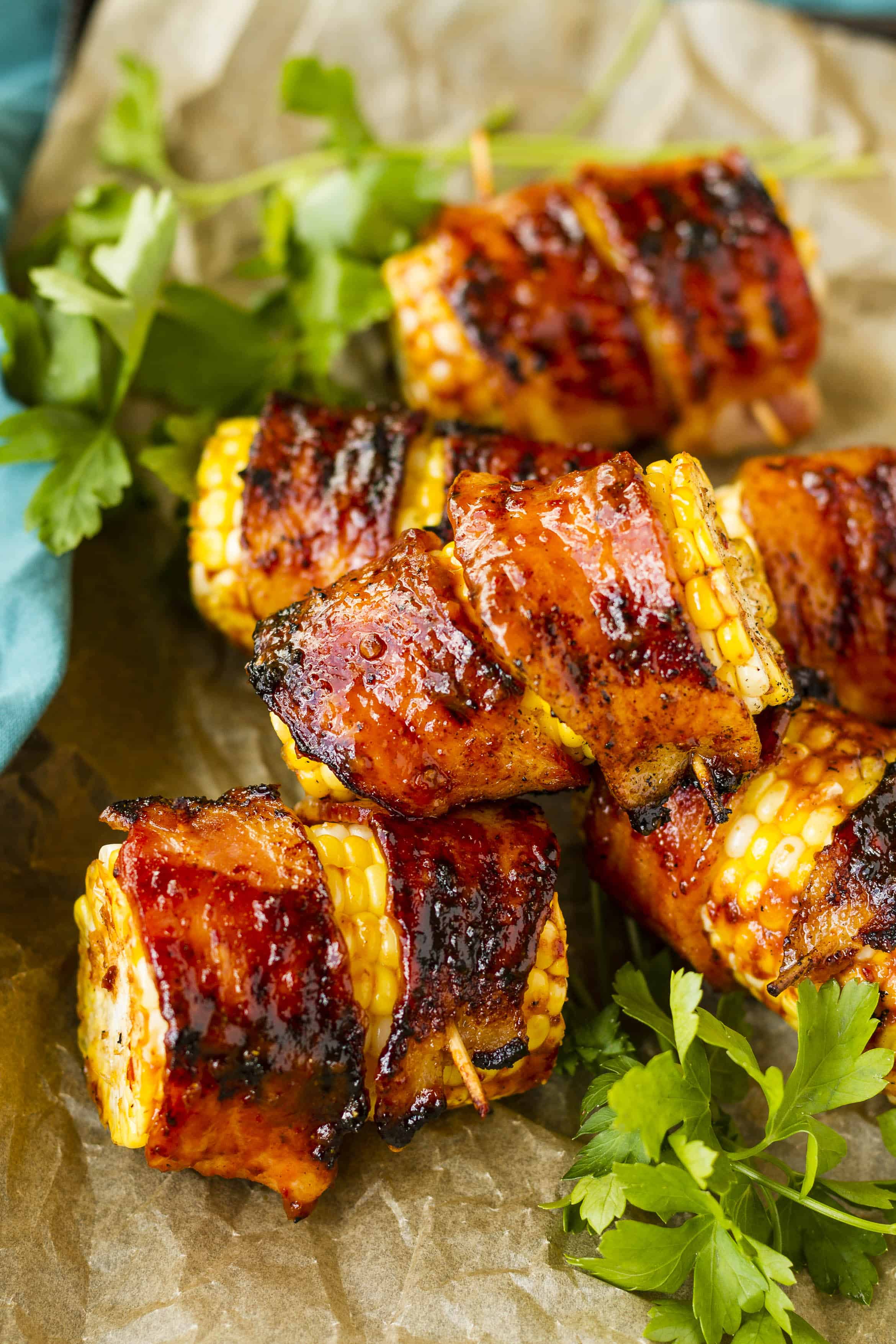 This is a sponsored conversation on behalf of Tyson; all opinions and text are my own. Thank you for supporting the brands that support this site!

We use our grill year round, albeit slightly more conservatively throughout the colder months. In the winter, we lean toward simple grilled peppers, burgers and chicken, all items that don’t require a lot of attention while grilling. But when the weather warms up, I get the itch to experiment — and this amazing bacon wrapped corn is one of the results.

It goes without saying that wrapping anything in bacon is a surefire way to add instant appeal, especially when you grill said item. In the case of this bacon wrapped corn recipe, bacon lends a smoky, rich flavor that highlights the fresh sweet corn that’s abundant in the summer months. Slathering it all with a honey chipotle glaze gives it a lovely bit of sweet heat that really makes the bacon extra crispy and delicious. THIS is the recipe that all your guests will be asking for after your next cookout! 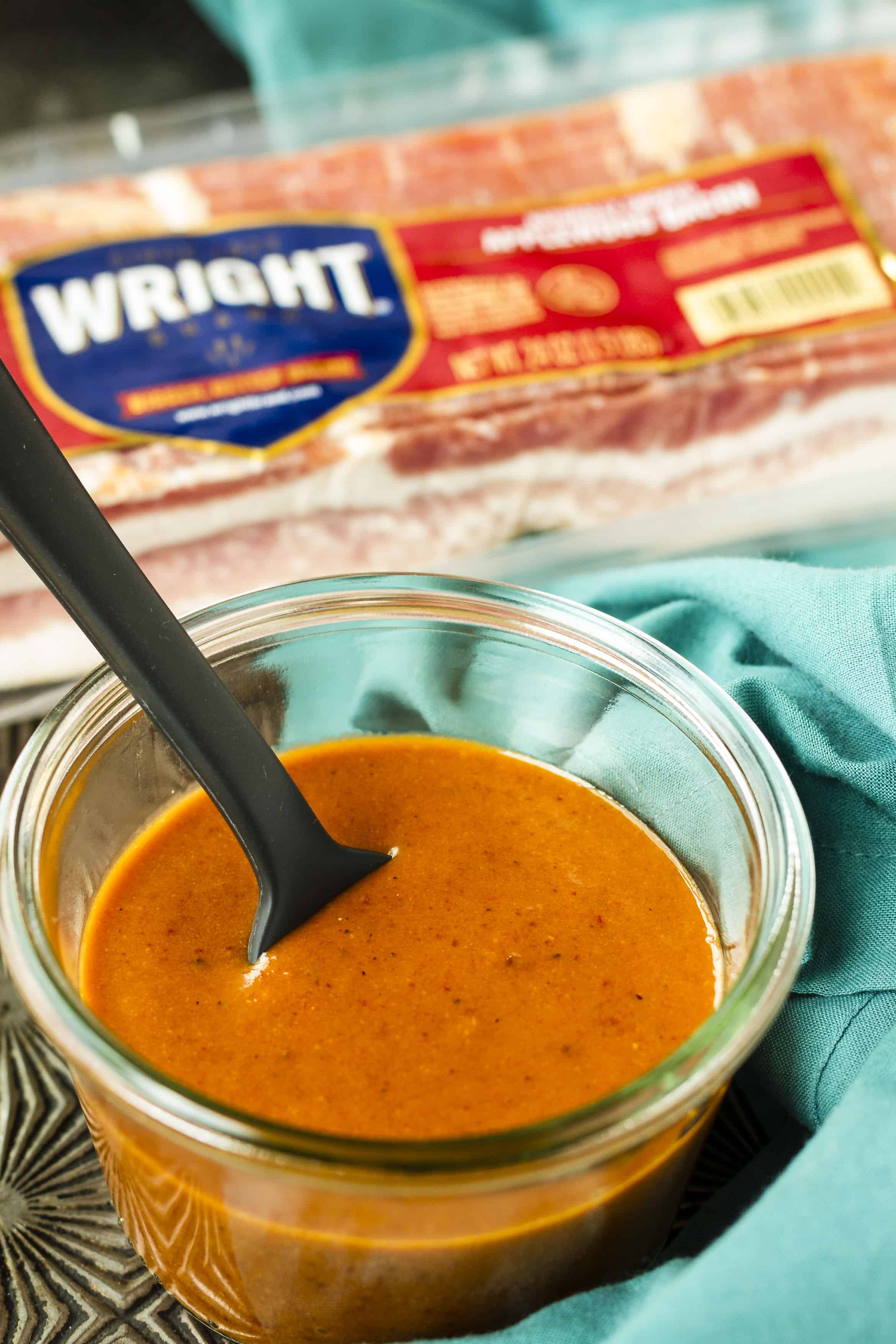 This luscious honey chipotle glaze really ties the bacon and corn together, and it’s SO easy to make. Simply whisk together equals parts of melted butter, pureed chipotles in adobo sauce, and honey. Then stir in a couple tablespoons of apple cider vinegar, along with some garlic powder, cumin, salt, and pepper.

This glaze can even be made ahead of time if you’d like, though it takes almost no time at all to throw together. Divide the glaze into two bowls, one for the initial slathering and one to continue basting the corn while it’s grilling.

The recipe makes enough honey chipotle glaze for 5 ears of grilled bacon wrapped corn on the cob, but you might even consider doubling it. It’s super versatile! Try slathering it on chicken, burgers, and more, or you can give other veggies the bacon wrapped treatment. Think asparagus, sweet potatoes, avocado, and so forth… #yum 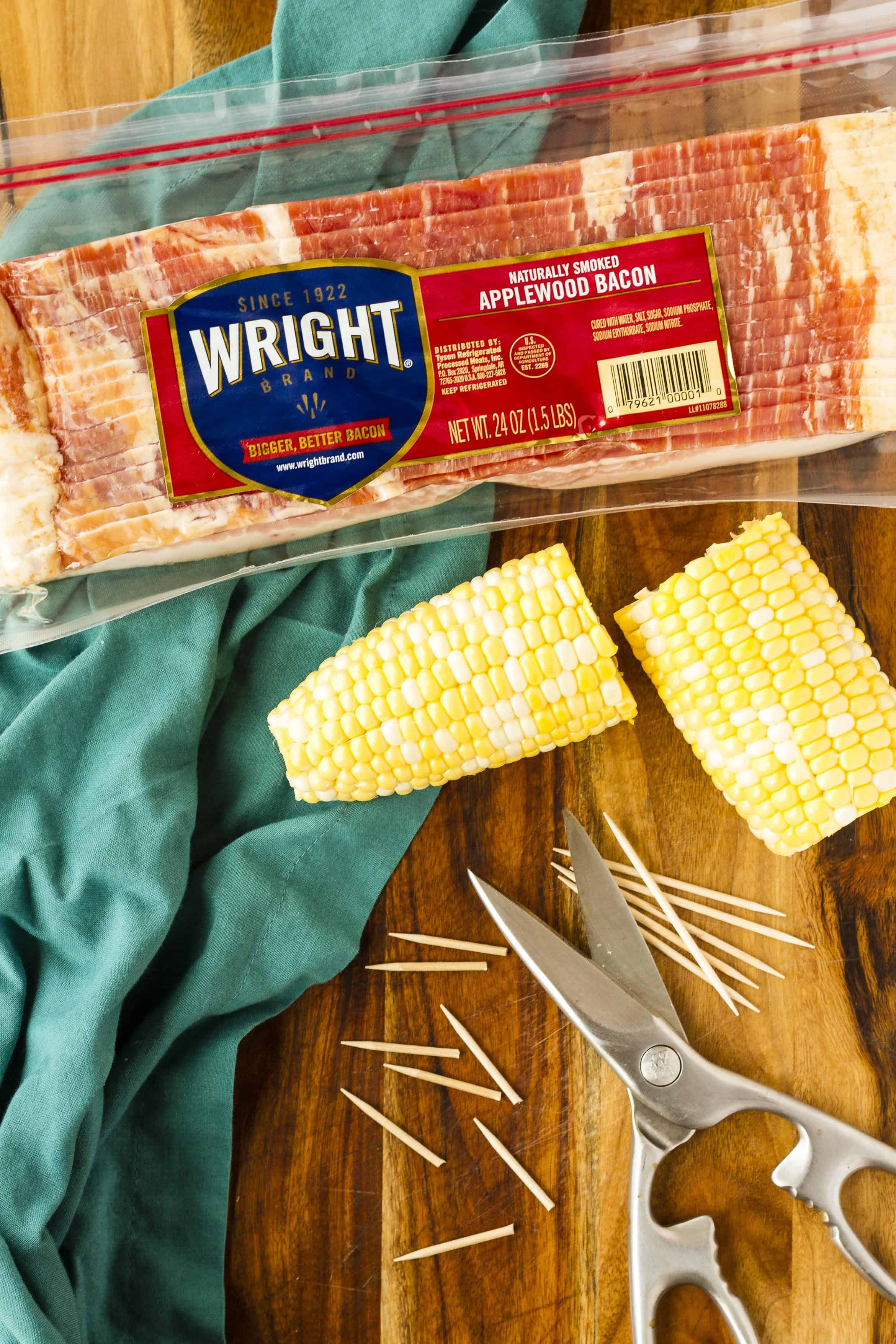 You’re going to want to use a high quality, thick cut bacon for this bacon wrapped corn recipe — like Wright® Brand bacon. Wright Brand bacon just so happens to be my very favorite bacon, based on both flavor and packaging. Their ziploc-style package makes it easy to pull out just a few pieces for a recipe and then seal the remainder up tight to use later. Though we rarely prepare less than a full package, it’s still an uber convenient feature when I need it.

Wright Brand bacon’s hand cut and hand trimmed proprietary recipe stands up well to the grilling treatment, and the thick, smoky flavor is exactly what you want to meld with fresh sweet corn. My mouth is watering just thinking about it! 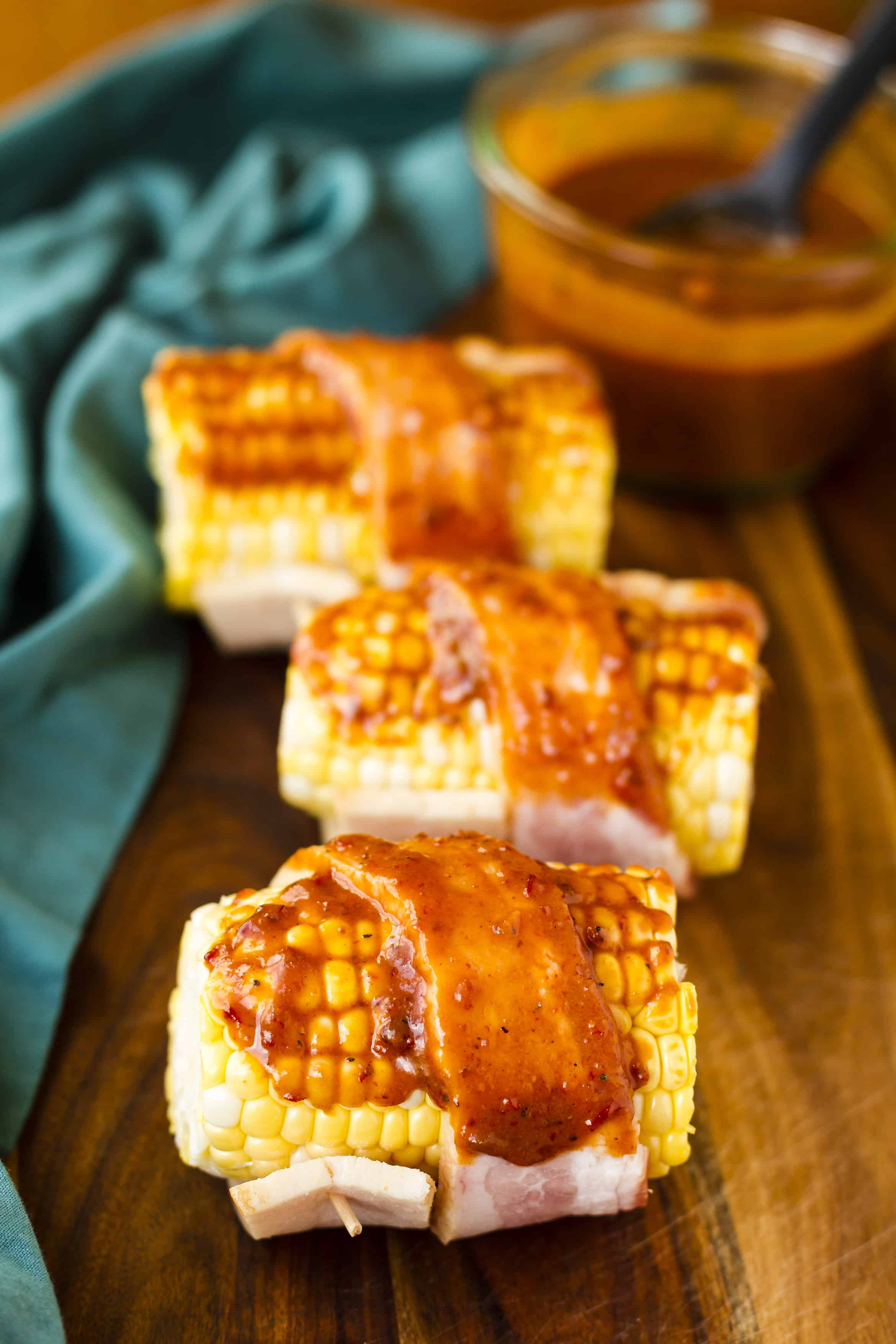 Wrapping the corn in bacon couldn’t be easier, but here are a few tips for best results:

Once the corn is wrapped in bacon, slather it all with the honey chipotle glaze. Spray your grill with non-stick cooking spray, and grill over medium heat for about 20-25 minutes, until the bacon is crispy and the corn is cooked and starting to char. Turn the corn every 1-2 minutes while cooking, while occasionally basting it with the reserved glaze. 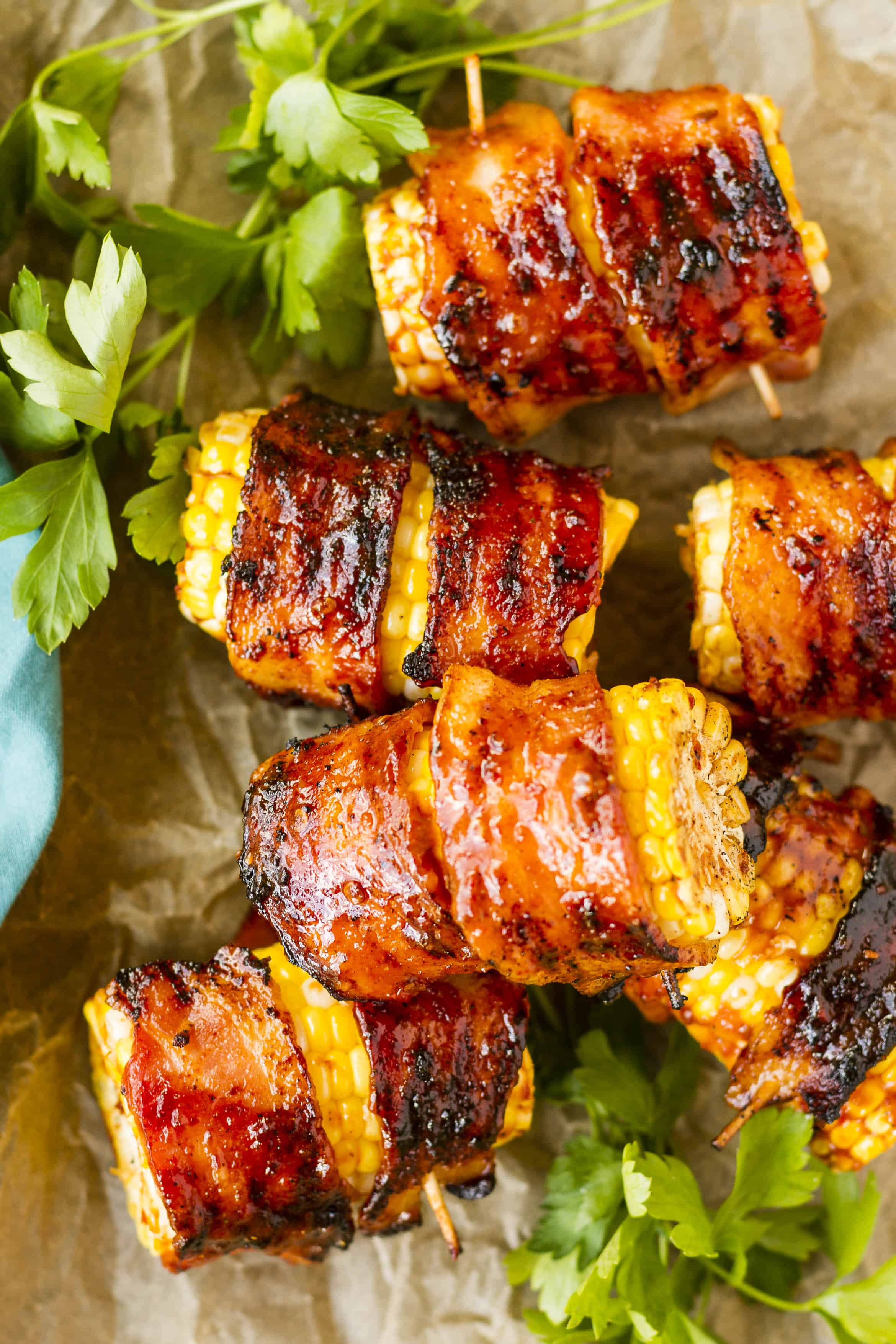 Remove the corn from the grill, season with salt to taste, and watch it fly off the platter! This recipe will surely be in heavy rotation for our gatherings this summer…

You might also want to check out how to cook bacon in the oven… Cooking bacon in the oven is HANDS DOWN the easiest way to get perfectly crispy and delicious bacon with the least amount of mess!

Your recipe for sweet & Spicy Bacon Wrapped Corn on the Cob is so delicious! thanks so much!