You can’t go wrong with your good ole’ slow cooker when it comes to making baked beans for a crowd! This tried and true crock pot baked beans recipe is loaded with brown sugar and bacon and makes enough for the whole gang at your next summer gathering. 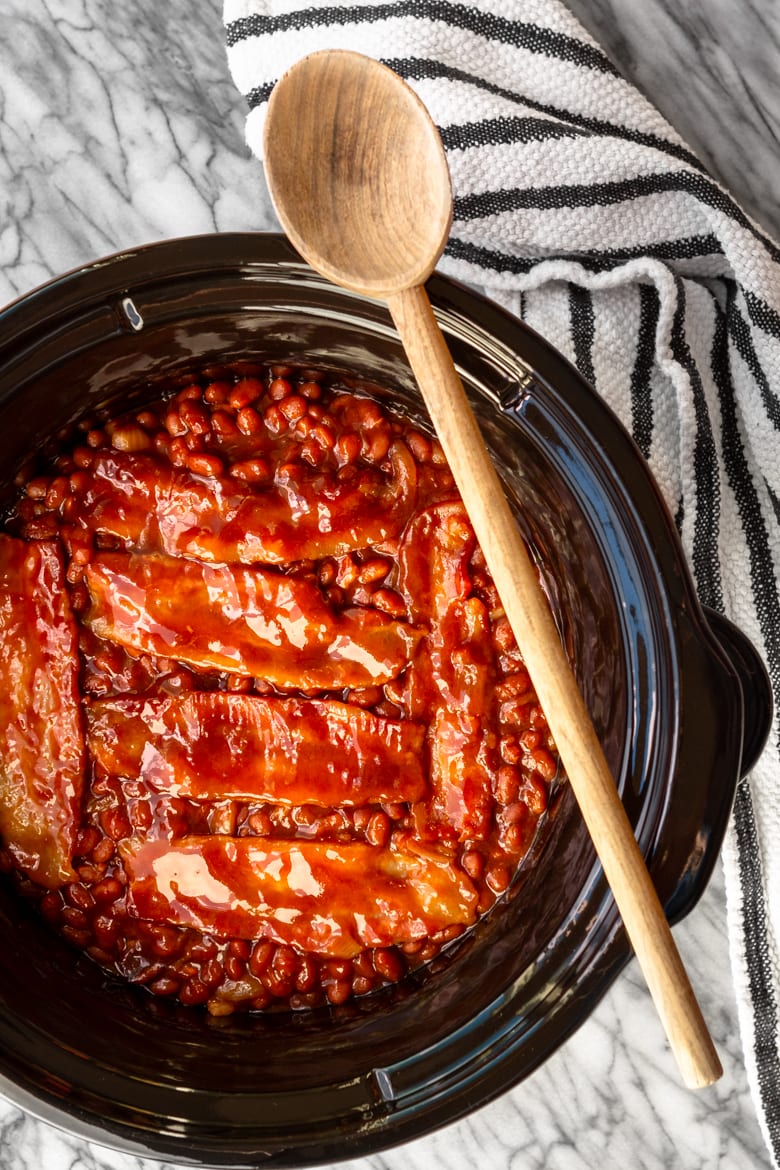 This is a sponsored conversation on behalf of Simply Beverages and Pringles; all opinions and text are my own. Thank you for supporting the brands that support this site!

Lazy summer days all seemed to run together when I was little, so the summer cookouts sprinkled across our calendar were always events I looked forward to. Of course, I enjoyed seeing distant family members and playing with cousins I might see only a few times a year, but make no mistake, I was really in it for the food…

Whether we were celebrating a holiday or a family reunion, the menus all looked pretty similar, but I didn’t mind in the least. Because I knew some of my favorite foods were sure to make an appearance — namely this cream corn casserole and my mom’s baked beans recipe. I use the term “recipe” loosely, because like so many of my favorite family recipes, up until just this week there was no actual written recipe.

I think that’s part of the charm of recipes that have been passed down over the years. No two family members make them exactly the same, but it’s those small variations each time that make the dish special. However, I know most home cooks prefer to work from a written recipe (I swing back and forth depending on the dish myself), so I sat down and wrote out my mom’s baked beans recipe, making a few adaptations to convert what was traditionally an oven-baked baked beans recipe to slow cooker baked beans.

Why the slow cooker? Well, for a number of reasons, starting with the fact that I don’t have to heat up the oven on a hot summer day. And this baked bean recipe is far more transportable this way, especially if you have one of the slow cookers that feature a locking lid. The ceramic insert will keep them hot for hours, whether you have an outlet available or not. And finally, it makes a BIG batch of baked beans EASY! 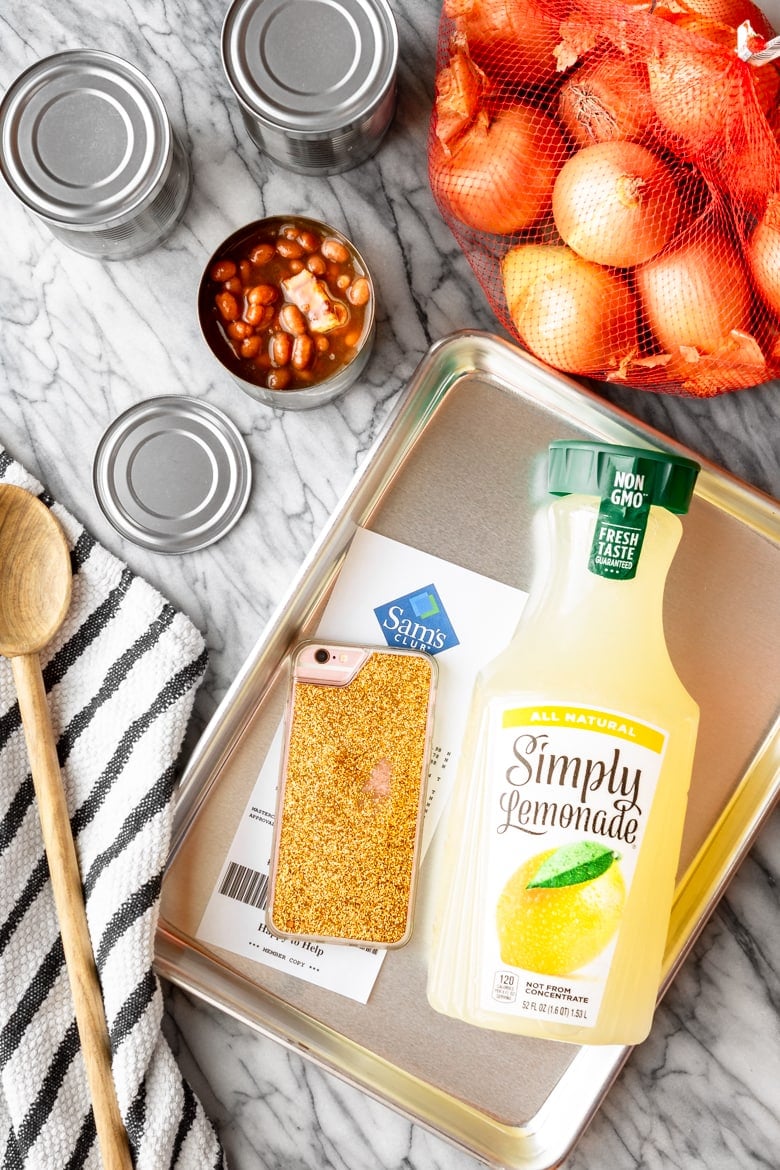 With five kids, big batch recipes are kind of a way of life for me. In fact, I often wonder how I’ll ever go back to cooking for just my husband and me someday…

Never fear, I’m going to share a scaled down version of this baked beans recipe that you can double to feed a crowd or prepare as is for a family dinner. AND I’m even going to throw in the oven-baked baked beans instructions, because I know some of you might prefer to make them that way.

Whether you’re making the recipe as is or scaling it up, you can save yourself some serious cash by stocking up on canned pork and beans at Sam’s Club. They carry an eight-pack that will yield two recipes’ worth of slow cooker baked beans or one large double recipe — all at their fabulously low bulk pricing.

If you’re hosting a cookout, it only makes sense to turn your trip into a one-stop stock up shop by snagging your chips, drinks (my kids love the big bottles of Simply Lemonade®), and desserts for the occasion at the same time.

And if you use the Scan and Go app or In-Club Pick Up, you’ll be in and out in almost no time at all. I am seriously in love with these convenient features! No more long checkout lines for me. 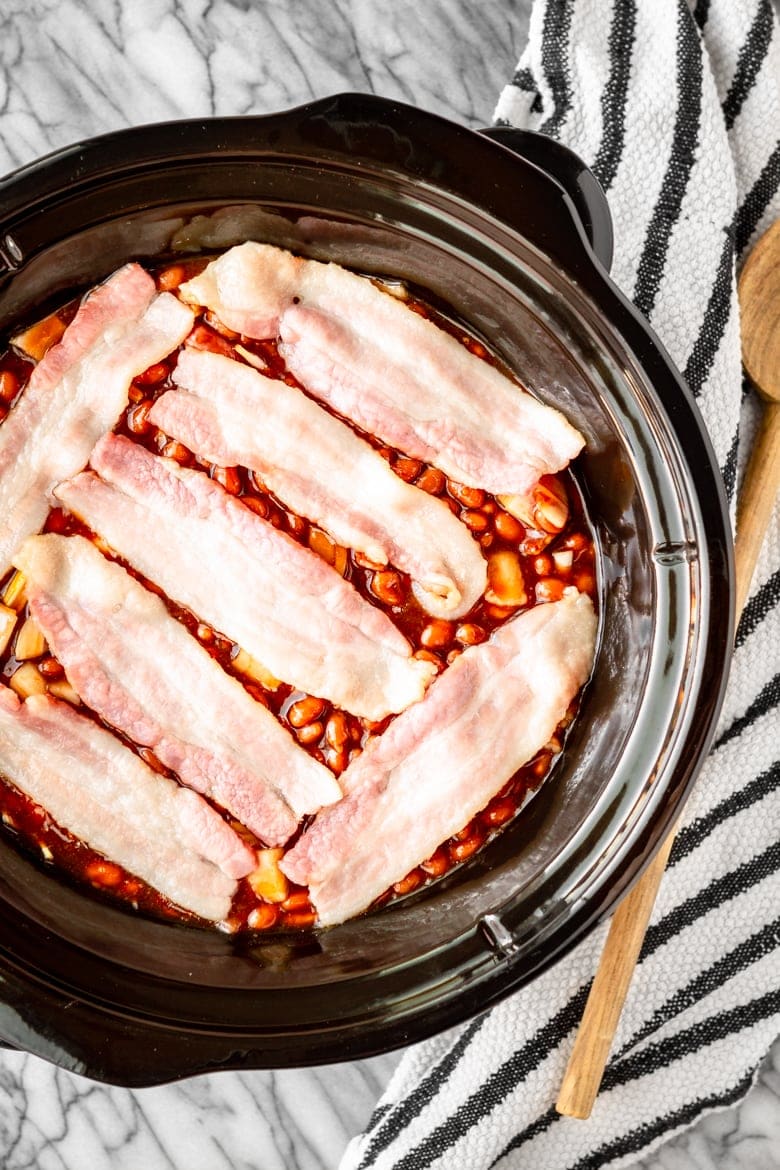 Six ingredients — that’s all you need to make this yummy crock pot baked beans with bacon recipe. As I mentioned earlier, it starts with canned pork and beans. I’m not typically a huge fan of semi-homemade recipes, but this is one where it totally works.

Start by opening the cans and draining off the excess liquid from the top. This will keep the baked beans from being too soupy after cooking. To the beans we’re going to stir in dark brown sugar, ketchup, mustard, chopped onion, and plenty of chopped up bacon slices. Because slow cooker baked beans with bacon is where it’s at, y’all!!!

But wait — I’ve got a little secret you need to know about the bacon. After you chop it up, spread it out on a paper towel on a microwave safe plate. Place another paper towel on top and microwave it for one minute to remove some of the excess bacon grease. NOW you can add it to the baked beans mixture… 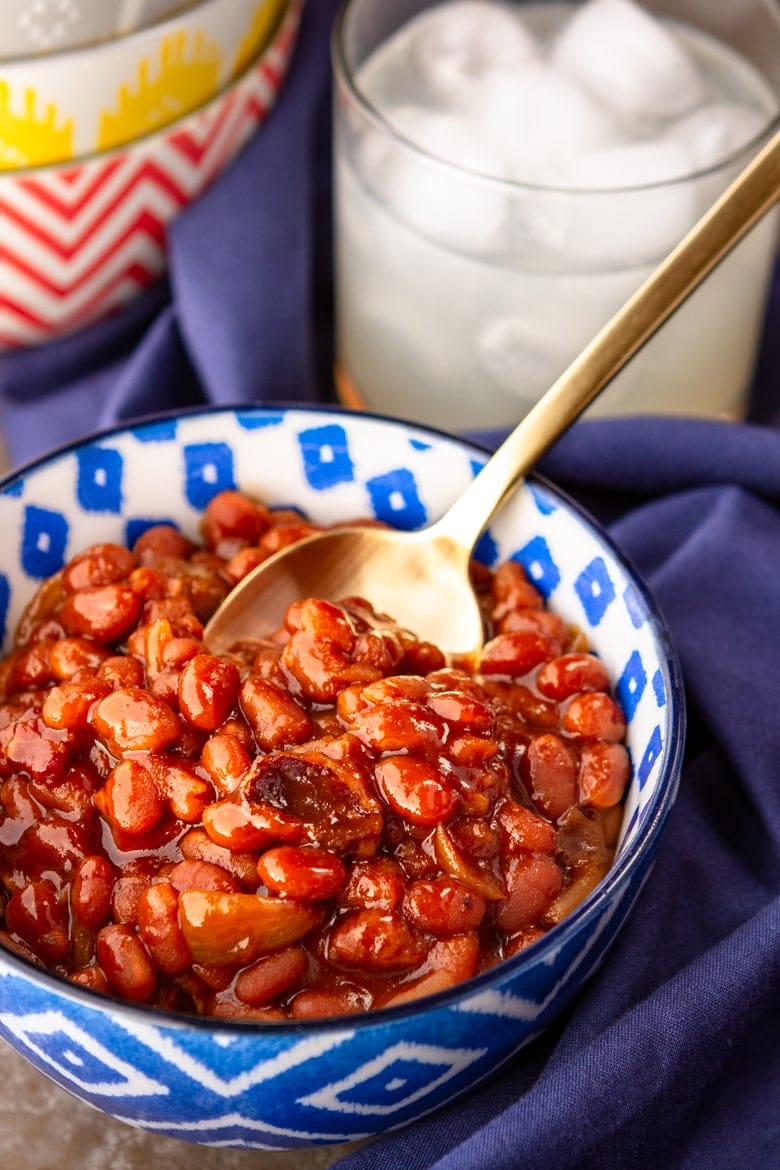 Cook on high in your slow cooker for about four hours, stirring occasionally. The baked beans may seem a bit liquidy when they’re finished cooking, but they will thicken up as they cool off. You can also sit the slow cooker lid on slightly askew for the last 30 minutes or so, which allows some of the liquid to evaporate and will help thicken them up.

PIN IT NOW! CLICK HERE TO ADD THIS CROCK POT BAKED BEANS RECIPE TO YOUR SLOW COOKER RECIPES BOARD ON PINTEREST!

These crock pot baked beans double easily to make baked beans for a crowd! Doubling this recipe in the slow cooker will extend the cook time to 6 to 8 hours on low, stirring occasionally, or about 2 hours if baking in the oven. 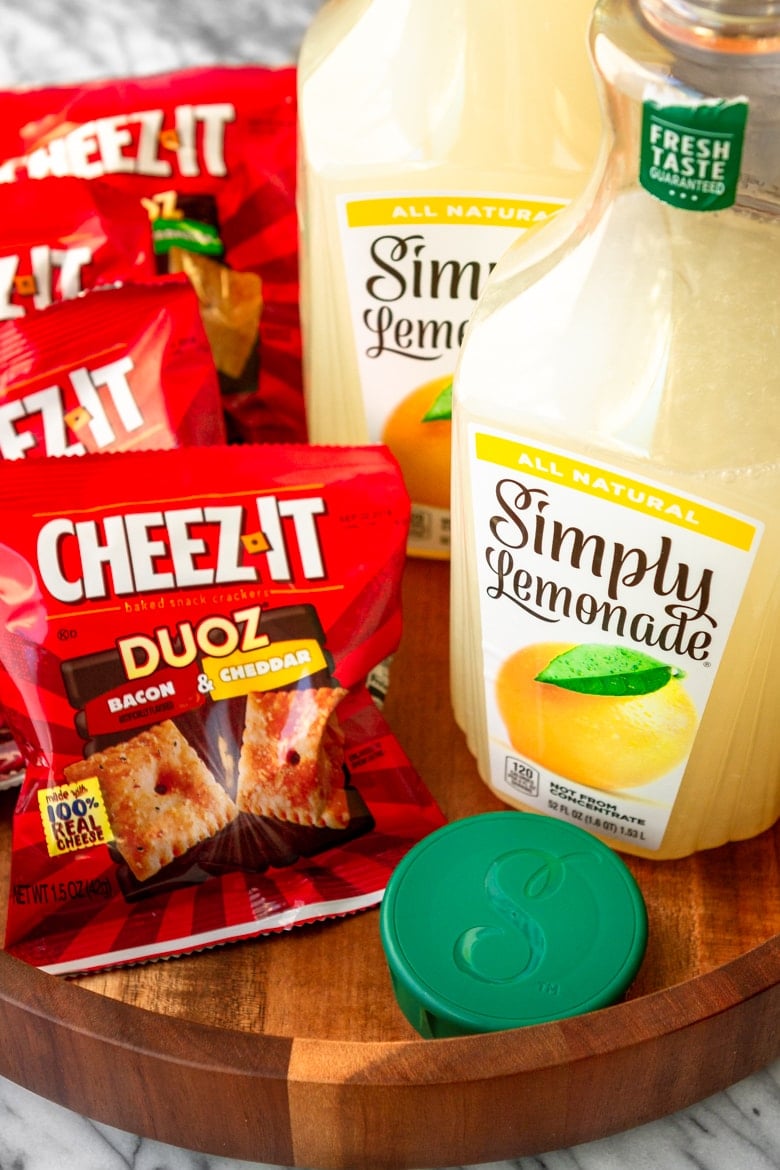 Need some inspiration beyond burgers and brats for your next cookout? A few of my faves are this easy chicken salad recipe, these marinated tri-tip beef kebabs (you won’t believe how simple these are!), and these BBQ chicken foil packets.

You can pick up the ingredients for all of them at Sam’s Club, along with your pork and beans, snacky items (like Cheez-it® Duoz and/or Pringles®), and some cold Simply Lemonade® to wash it all down!

If you like these crockpot baked beans, you might also enjoy these other cookout side dish recipes:

Can this be made a day ahead of time and then reheated in the oven the day of?

Yes, you can definitely make it ahead and reheat it!

It says if your going to double the recipe the cook time would double to 8 hours?? Is this on low? Also other than cooking the bacon aren't you basically just marrying the ingredients together? Seems like 8 hours is overkill, please advise!

Hi Donna -- thanks for pointing this out! It would be 6 to 8 hours on low if you double it. I will make an adjustment to the recipe notes right now.

My kids are obsessed with baked beans. They're going to be so excited when I make these for them this weekend.

We love baked beans! Can't wait to whip up this recipe!

What a savory dinner recipe! Definitely adding this to my dinner line up for the week! Yum!