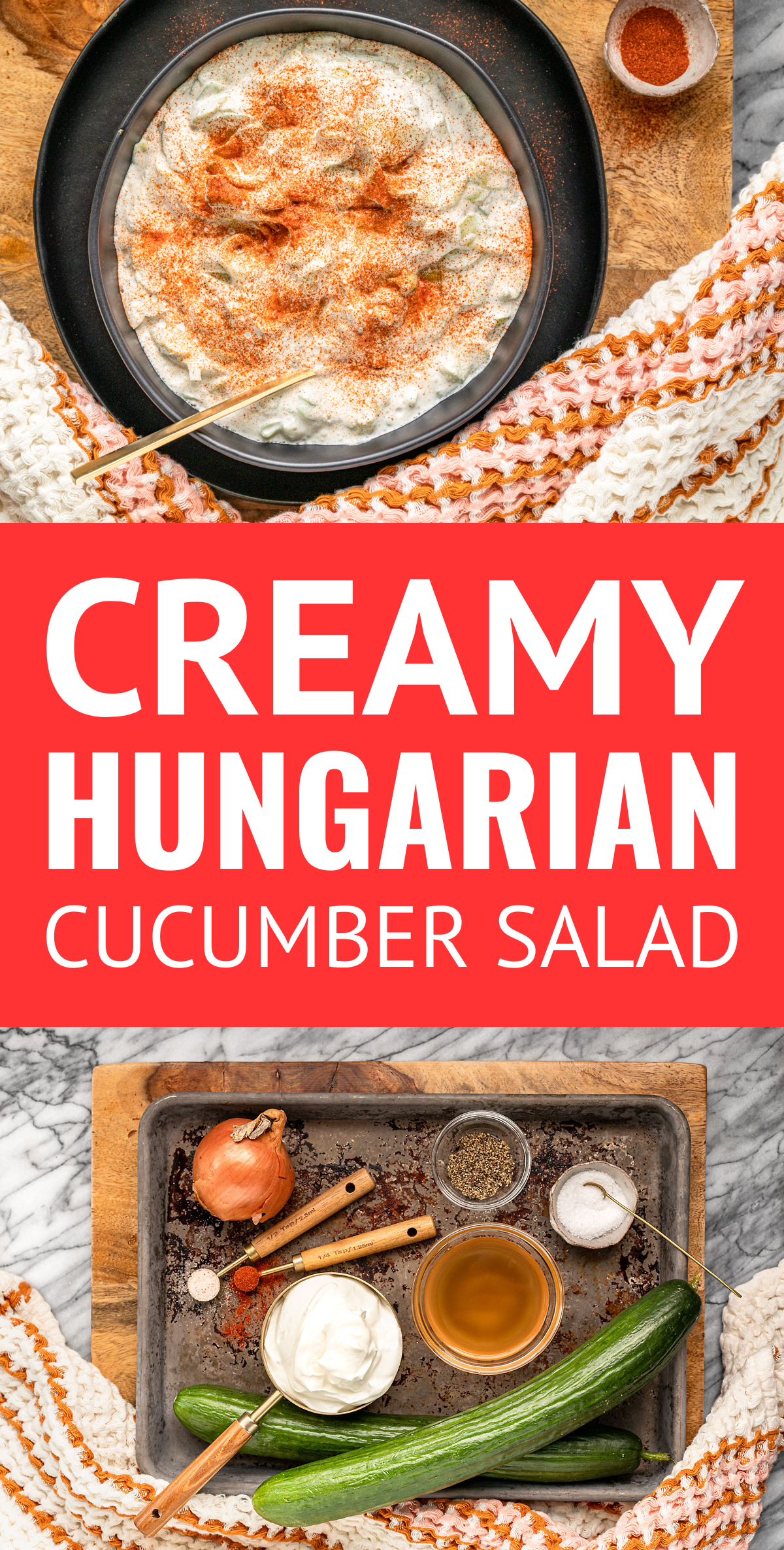 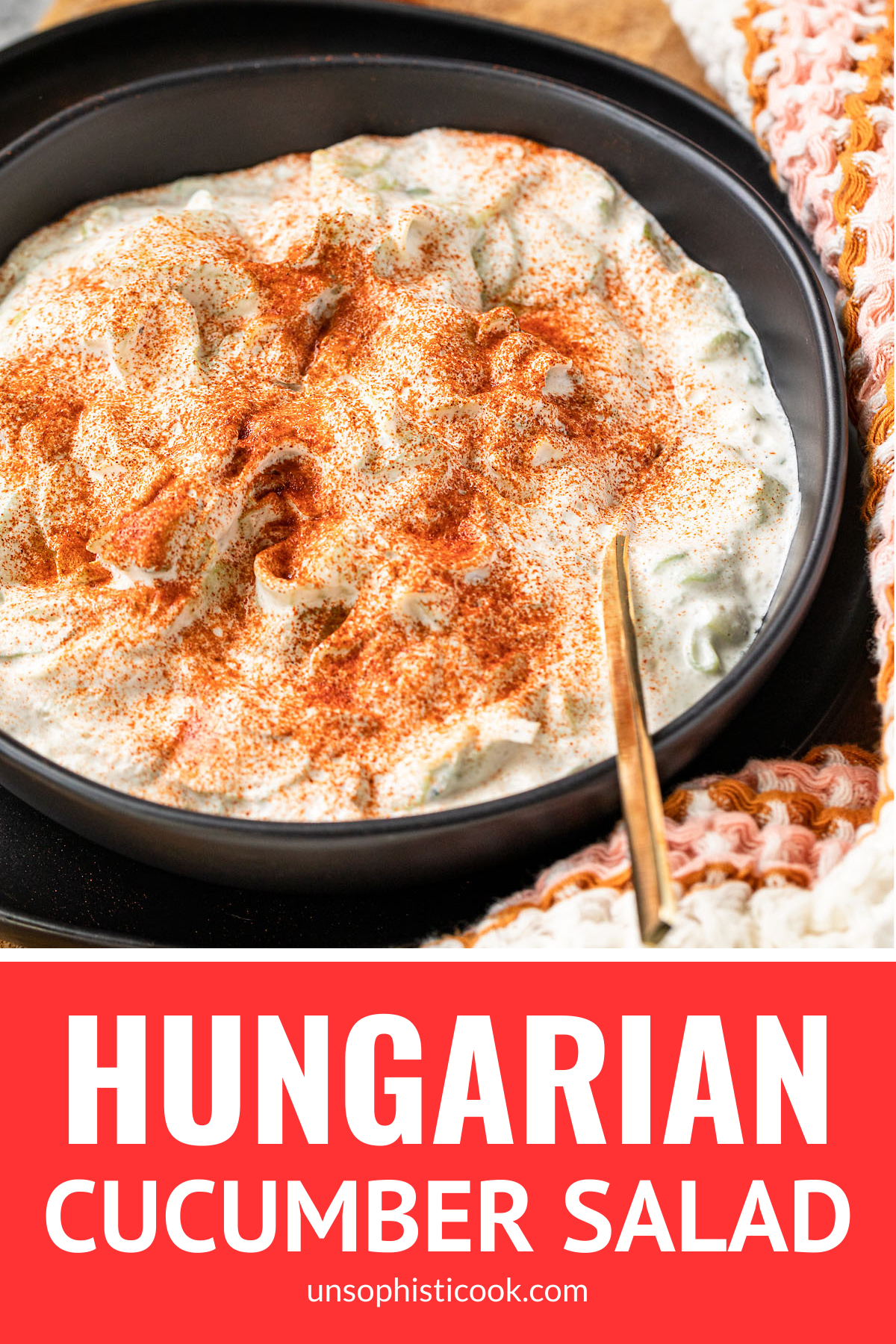 This refreshing creamy cucumber salad recipe has been making an appearance on our dinner table for as long as I can remember. Hungarian cucumber salad with sour cream is a versatile side that pairs well with just about any main dish! 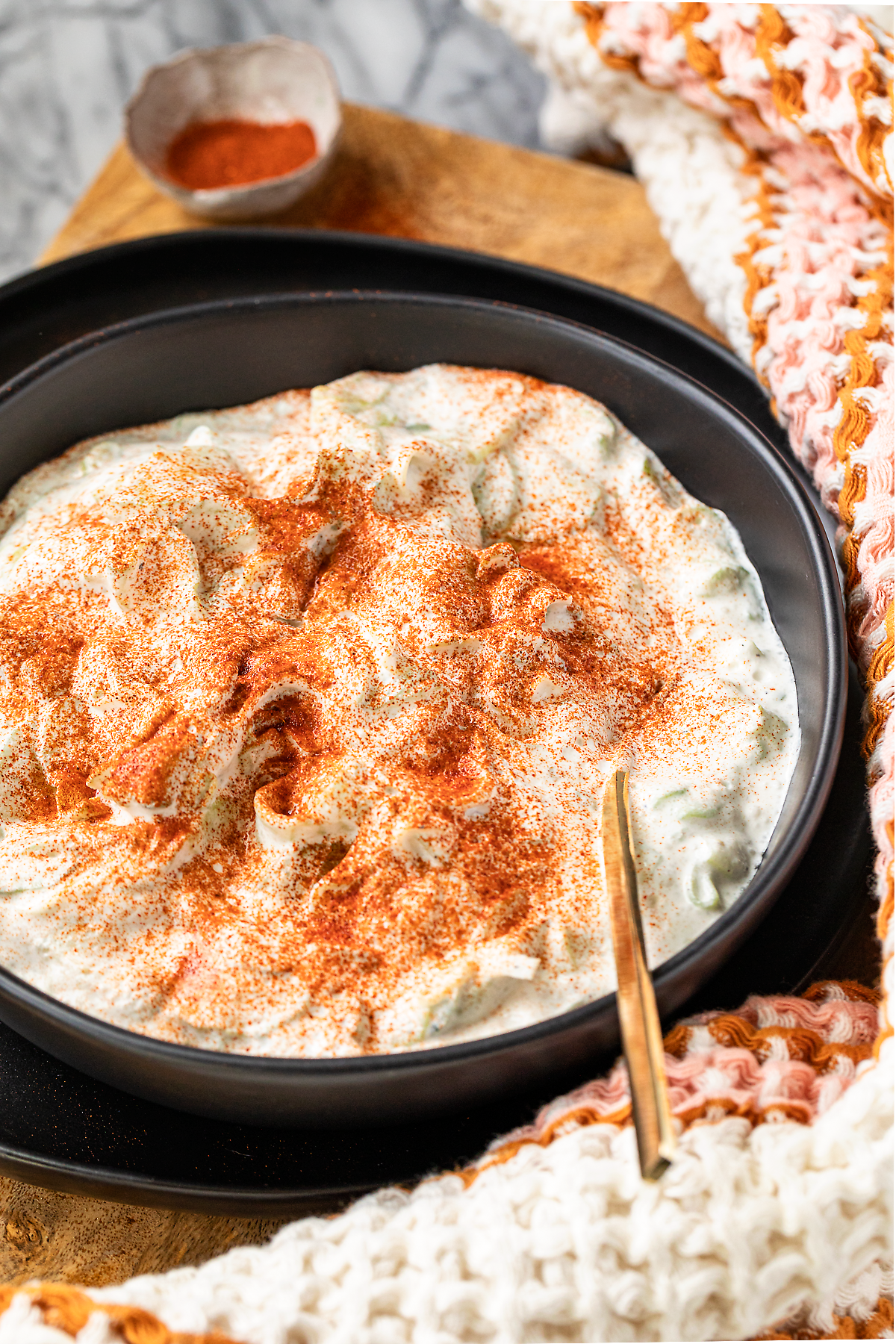 Let me introduce you to what may be my all-time favorite simple side dish — Hungarian cucumber salad! This light and creamy cucumber salad with sour cream has been making an appearance for family gatherings, holidays, potlucks/cookouts, and summer parties (and on our dinner table for absolutely no special reason at all) for as long as I can remember…

What makes this easy cucumber salad recipe so special? It’s hard to put a finger on just ONE thing…

✔ A tangy sour cream dressing perfectly complements the cool and crisp cucumbers and onions.
✔ Then the creamy sour cream cucumbers combo gets deliciously frothy and foamy when whisked together.
✔ Top it off with a generous sprinkle of authentic Hungarian sweet paprika, and it’s a total. flavor. explosion.
✔ Oh, and did I mention it’s actually a low carb cucumber salad?!

I still adore this creamy cucumber and onions combo as much today as I did when I was little. And much to my husband’s horror, I also still sip the last of the rich and flavorful sour cream dressing straight out of my bowl…

At least in the privacy of our home, LOL! 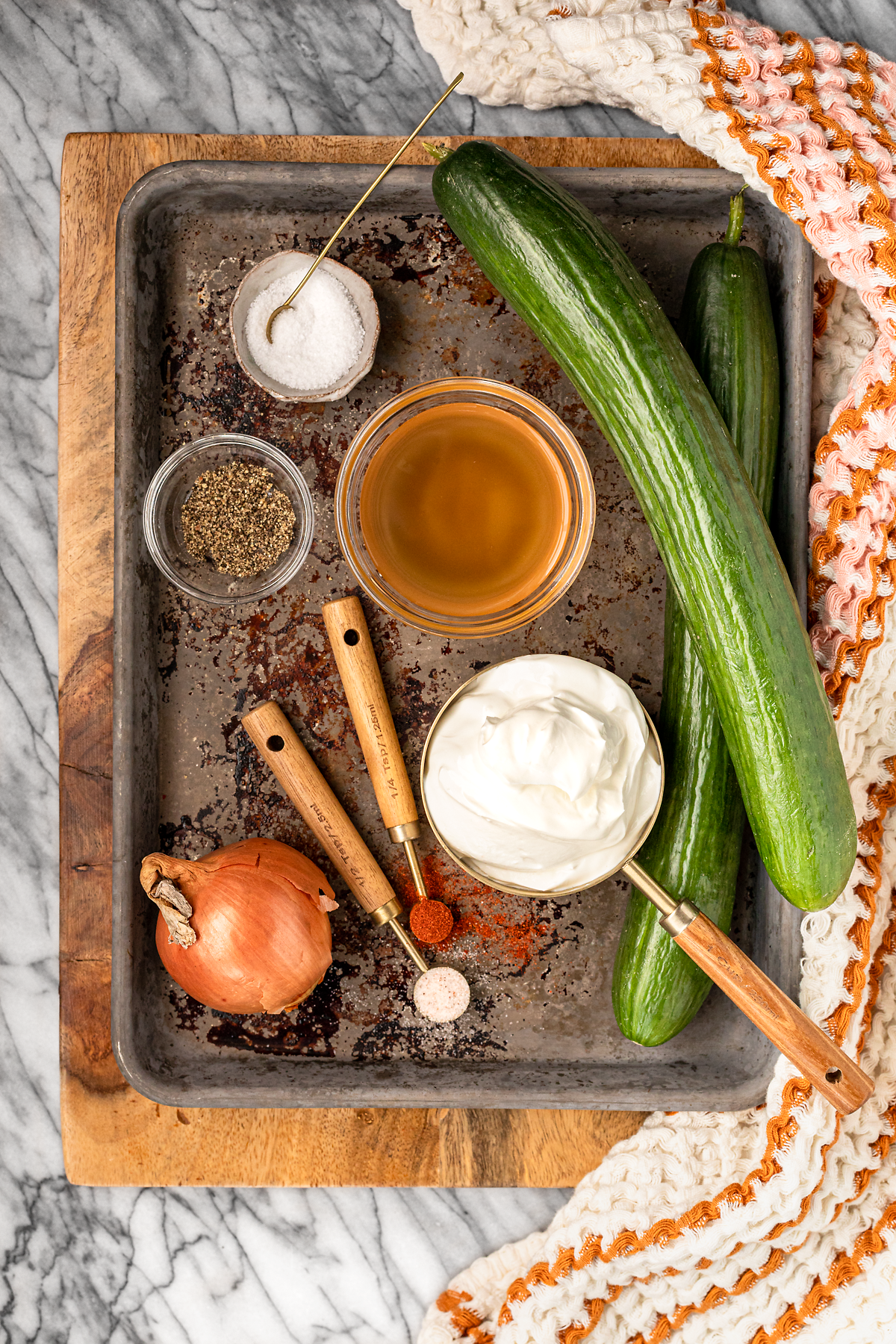 Traditionally, cucumber salad was served as a summer side dish. Fresh cucumbers were only available between May and August. But these days, grocery stores carry cucumbers year round. So now we can enjoy it any time of the year — which makes me very happy!

Look for firm cucumbers with a rich medium to dark green color. Avoid any with wrinkles, blemishes, soft spots, or yellow spots.

For an authentic Hungarian cucumber salad, choose regular slicing cucumbers. But I prefer to use English cucumbers in this recipe. They’re a bit more expensive than regular cucumbers but are nearly seedless.

yellow onion — you could also use white onion, but I would not recommend red onion in this recipe. Depending on your tolerance for raw onions, you can use more or less than the recipe calls for. I’m not a huge fan, so I use only half of a small onion and slice it *very* thinly.

sour cream — in most cases, I’m not picky about the sour cream I use in a recipe. However, when I’m making this cucumber onion sour cream salad, I always use Daisy sour cream. I love the extra creamy and smooth consistency it gives the sour cream dressing!

apple cider vinegar — you can use white vinegar in a pinch, but I recommend ACV. Its less sour flavor perfectly complements the cucumbers and sour cream. Or you can also use white wine vinegar.

Hungarian sweet paprika — good quality sweet paprika is essential for authentic flavor. I like this single-ingredient authentic Szeged Hungarian Sweet Paprika variety. Find it in the ethnic aisle of your grocery store or order some online!

It’s typical to find many ingredient variations among various heirloom recipes. This Hungarian cucumber salad is authentic to how my family has always prepared it.

But it’s possible your family’s cucumber onion salad recipe is quite different. And if so, I’d love for you to share it in the comments. I’m always open to trying new versions!

Adding dill seems more common in Polish cucumber salad recipes. At least based on my experiences with my mother-in-law’s sour cream cucumber salad…

I’ve actually noticed there’s a LOT of overlap between Polish and Hungarian cuisines. Like Haluski vs. Haluska, as I mentioned in my cabbage and noodles recipe.

FUN FACT: My Hungarian grandma always referred to this dish as simply uborkasaláta. This does mean “cucumber salad” in Hungarian, so it’s not WRONG… But it’s also not technically right, either.

Because there ARE Hungarian cucumber salad recipes without sour cream. So this creamy salad is more specifically tejfölös uborkasaláta, since it’s made with tejföl (sour cream). 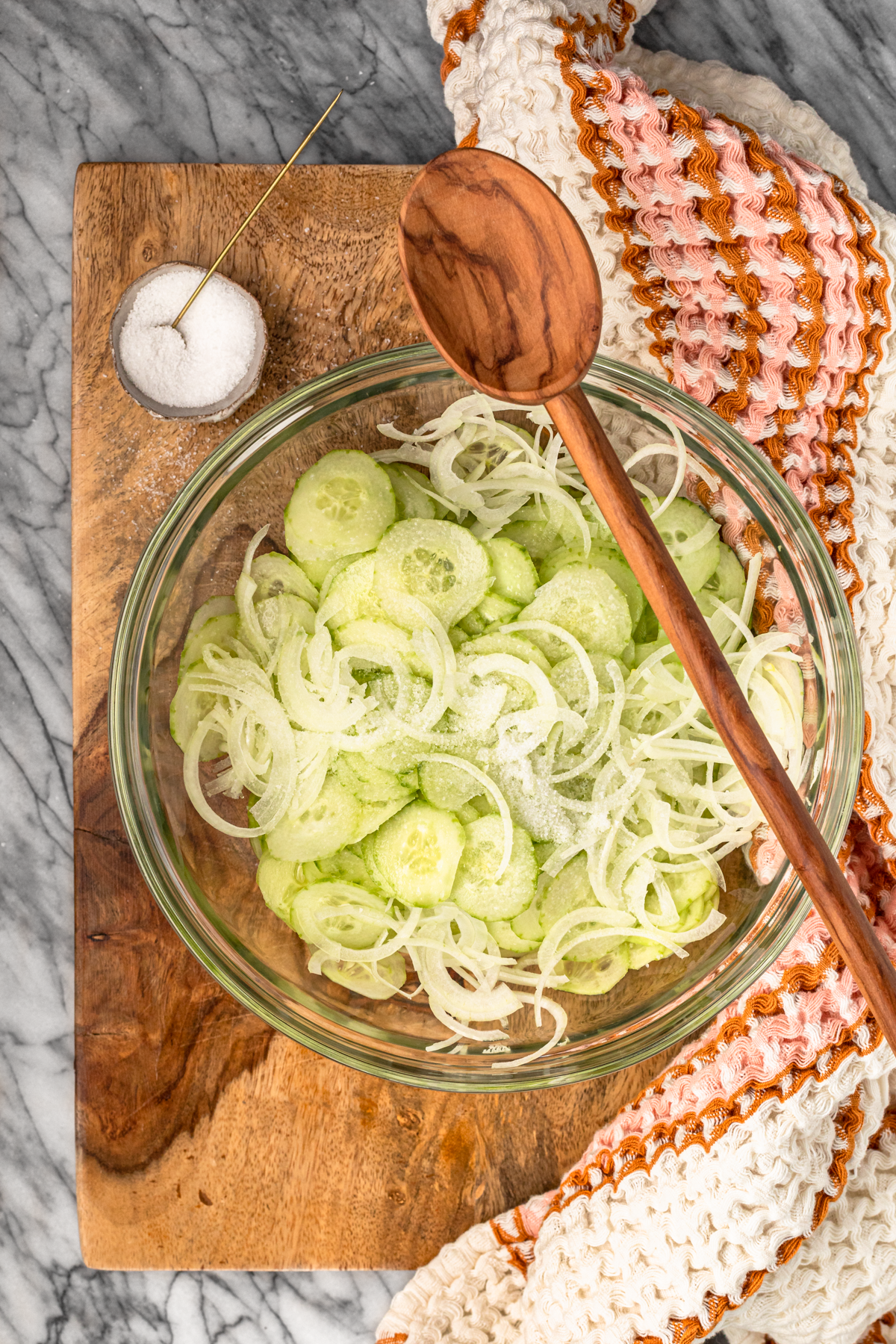 How To Make Cucumber Salad

Step one in this creamed cucumber recipe is to extract the excess water from the cucumbers. DON’T SKIP THIS!!

Cucumbers contain a LOT of water… Removing as much of this water as possible is essential. Otherwise, it will leach out and make the sour cream dressing watery.

Sprinkling the sliced cucumbers and onions with salt helps draw the extra water out. Then you can squeeze as much liquid as possible out of the mixture.

This step will keep your cuke salad creamy and delicious!

How To Keep Cucumber Salad From Getting Watery

But my husband prefers to use this vegetable chopper/slicer when he’s helping. You can also use a mandoline or a food processor, if you prefer. Use whatever method makes things easiest for you!

2| Place cucumbers in a bowl, along with the sliced onions. Toss the cucumber/onion medley with a generous sprinkle of kosher salt.

3| Set the bowl aside to allow the mixture to marinate for about 30 minutes, stirring occasionally. I use this downtime to prepare the simple sour cream salad dressing.

4| After about 30 minutes have passed, squeeze as much water as possible out of the cucumber onion mixture.

I find it’s easiest to dump the mixture out into a colander set in your kitchen sink. Reach in and grab large handfuls of the cucumbers and onions. Squeeze hard with both hands to wring out as much liquid as you can.

Place the squeezed cucumbers and onions back in your mixing bowl. Continue the process until you’ve removed as much excess water as possible. 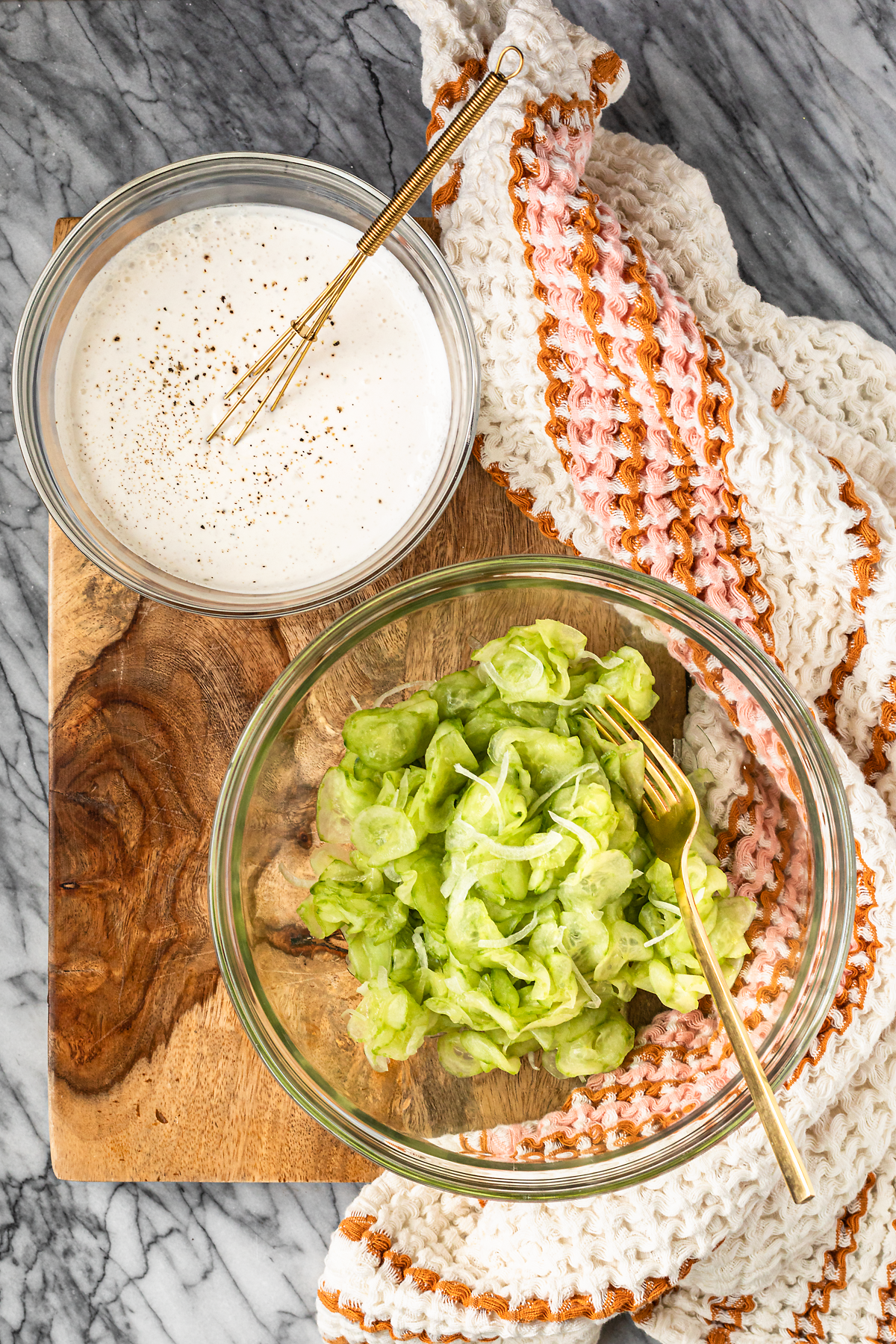 How To Make The Sour Cream Salad Dressing

This tangy sour cream dressing is shockingly delicious for having so few ingredients. AND it’s ridiculously easy to make!

Start by stirring the sour cream and apple cider vinegar together. Then whisk a couple tablespoons of water into the sour cream vinegar mixture. Finally, season the dressing with salt and freshly ground black pepper to taste.

That’s all there is to it! Then I pop it in the fridge until the cucumbers and onions are ready to go.

Use a fork to vigorously stir the sour cream dressing into the cucumber onion mixture. When it’s well-mixed, the dressing should look frothy and foamy. Transfer the creamy cucumbers to an airtight container and chill for at least two hours.

PRO TIP: this is also a super versatile dressing recipe. If you thin it down with some milk or a little water, it becomes a great all-purpose creamy salad dressing.

It’s my favorite way to dress a simple green salad in the summertime. Especially one made with fresh greens picked straight from the garden… SO GOOD!! 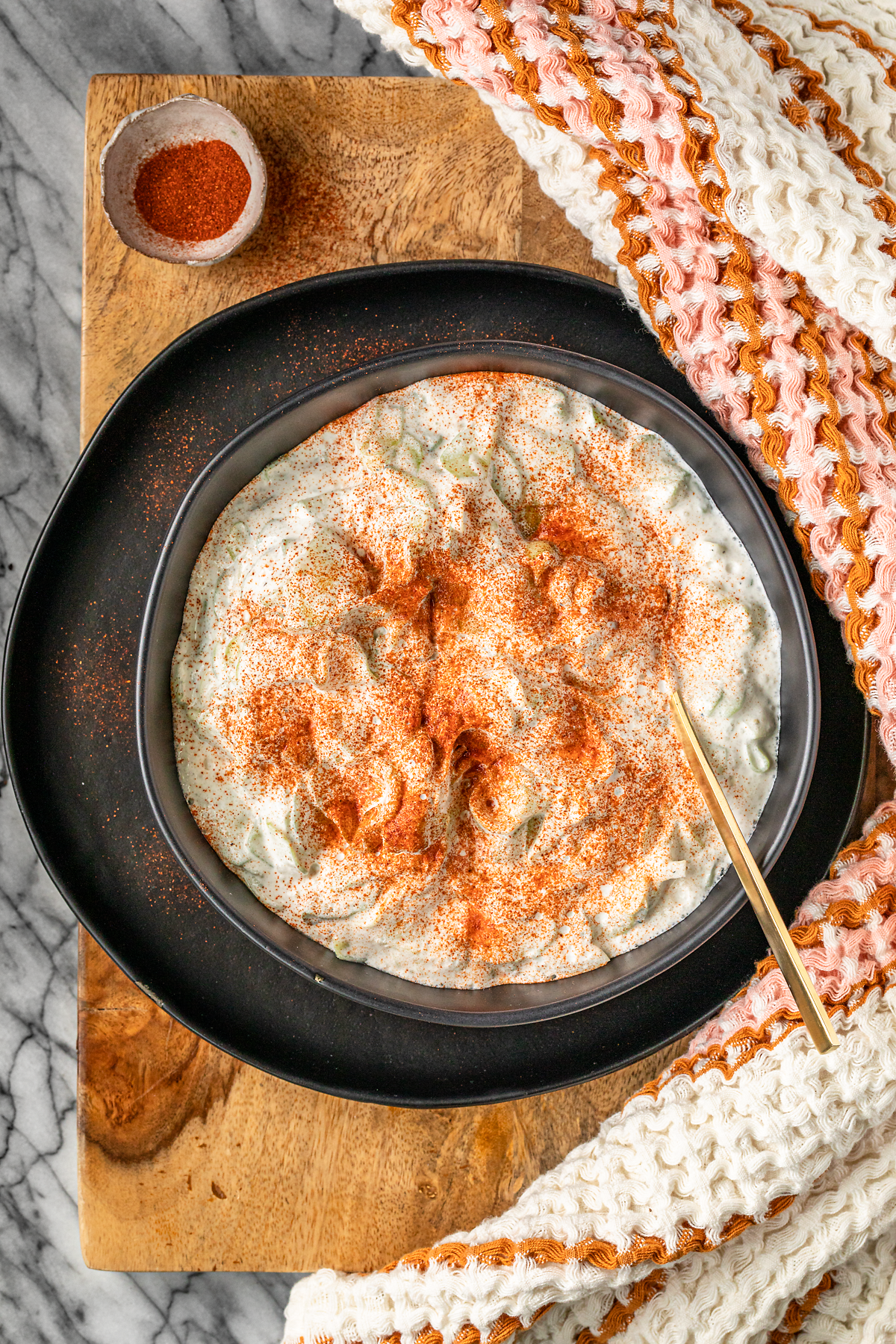 This creamy cucumber recipe is a lovely side salad that’s a perfect side dish for pretty much any meaty main dish, but it pairs especially well with spicy dishes thanks to the combination of cool cucumbers and sour cream. It’s best served well-chilled, preferably with plenty of Hungarian paprika sprinkled over the top…

At least that’s MY preference — my kids prefer only a little paprika. But at least they’re a fan of cucumber salads!
This creamy cucumber recipe is a lovely side salad. It’s a perfect side dish for just about any meaty main dish. The combination of cool cucumbers and sour cream pairs especially well with spicy dishes.

It’s best served well-chilled, preferably with plenty of Hungarian paprika sprinkled over the top… At least that’s MY preference — my kids prefer only a little paprika. But at least they’re a fan of cucumber salads!

For the sour cream dressing:

Cucumber salad may be made up to one day ahead of time. The next day you may notice some excess liquid, but just vigorously stir it up again, and you will still have the same foamy and frothy texture as when it's first made.

If you like this Hungarian cucumber salad recipe with sour cream, you might also enjoy these other delicious Hungarian recipes:

Being from a Hungarian home we use the simple recipe for uborka salat. After salting and wringing out the cucumber and onion we pour in vinegar. Not everyone likes it with sour cream so we serve that on the side. Many different regions in Hungary and many different versions of the same dish.

Serving it with the sour cream on the side is a great option!

WOW cut all the dialog and get to the recipe!!!!! I made it...delicious

So glad you loved it, Donna-lyn! And I appreciate the feedback. Unfortunately, Google needs all of the dialog in order to to rank a recipe in search. However, I do provide a button that allows you to jump straight to the recipe at the top of each post.

I am so happy to have found this website with some of the delicious recipes my Hungarian grandmother used to make. She used to serve the fried cabbage with her homemade noodles and tomato soup with a dollop of sour cream on top. Thank you so much

So happy you found it, Cindy! I have more to share, so check back.

Similar to my families Hungarian Cukes & Sour Cream Recipe. Though we don't use onion, but minced/crushed garlic.

Note that English & Persian, do not need to be skinned or have the bitter/sweet taste test. Regular (Pole) cucumbers need this because at the vine end can have a bitter section & if you skin or cut down the cucumber before ridding it of the bitter end, you'll spread the bitterness throughout the rest of the cucumber.

Thanks for sharing! I will definitely have to try swapping the onions for garlic sometime. That's a great tip for the cucumbers -- I don't like a lot of seeds in mine, either.

This is how my mom made her cucumber salad. she would make it along with breaded chicken and mashed potatoes. My favorite comfort meal!!!

Sounds fantastic, Barbara! I just made it recently for Easter, and I can't wait until I can get good local cucumbers at the farmer's market.