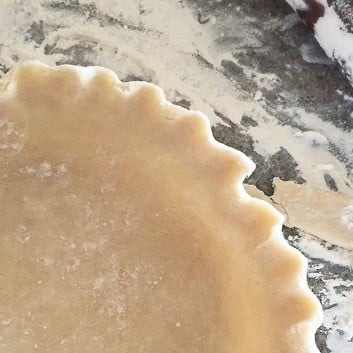 Making a simple pie crust should be easy, shouldn’t it? I mean this Crisco pie crust only calls for three uncomplicated ingredients: flour, Crisco shortening, and salt, plus some cold water. Then you fill it with something tasty and voila — a delicious pie!

So why do so many of us find this 3-ingredient pie crust so darn intimidating? For me, personally, it’s my inner perfectionist whispering that I didn’t roll it out just right.

It’s a little lopsided, with a thicker crust on one side and thinner on the other. Or perhaps it tore down the center as I was trying to situate it in the pie plate.

But then the practical side butts in and says, “Who really cares”?!? All that matters in the end is that it tastes good!” And you know what? It’s true.

We’re not trying to win any blue ribbons here, and keeping it real in the kitchen is all about trying new things and having fun while doing it. Sometimes you’ll nail it! And sometimes it will flop horribly…

But a little success rarely comes without a lot of failure — trust me. 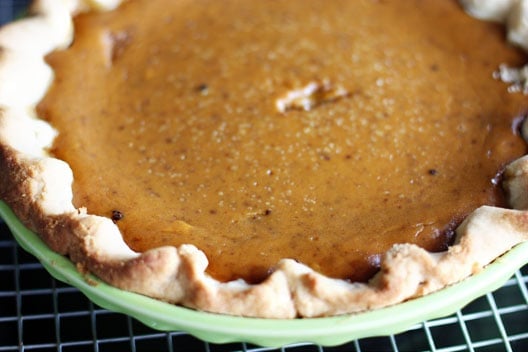 Ready to give it a shot? This is the Crisco pie crust recipe that we’ve traditionally used in my family, most often at Thanksgiving for my homemade pumpkin pies.

As an aside… I always thought it was my step-grandmother’s creation, so imagine my surprise when I recently saw the exact recipe printed inside a box of Crisco shortening sticks! I’ve included the original Crisco pie crust recipe, plus my adaptation which makes enough dough for two deep dish pie crusts.

If your pie recipe calls for a pre-baked pie crust, it's easy to blind bake this pie crust. After plating the prepared pie pastry, prick the sides and bottom thoroughly with a fork. Bake at 425 degrees for 12-15 minutes, until light brown. Cool completely before filling.

I used this exact pie crust recipe you've posted - which is actually the one written on the Crisco package - and my crust came out too crumbly, the whole house smelled of burning Crisco instead of a delicious pie, and the taste was dreadful - too salty and greasy. The crust just fell apart. I would recommend using a half-cup of Crisco, and 1/2 tsp of salt - 3/4 cup of shortening and 3/4 tsp of salt are both too much. You'll have a disaster on your hands.

Hi Hogarth! Yes, the ingredients are the same as the recipe on the Crisco package; however, the amounts and instructions differ. If your crust turns out too crumbly, that is typically a sign that too little water was added. Be sure to hydrate the flour with enough cold water to get the dough to stick together. The amount of water you add can vary each time you make the dough, depending on the humidity on the day you're preparing it. If you prefer a sweeter pie crust, you might try adding a tablespoon of granulated sugar to your dough, as mentioned by Short N' Sweets custom cakes in a previous comment.

One last thing, take care to make sure you are measuring the Crisco properly. I used the sticks instead of measuring from a can when making the crusts for my Thanksgiving pies this year, and I accidentally added 2 cups of Crisco instead of just one! There are two different sets of measurements on the foil wrapper, and it's very easy to glance at the wrong one when you're in a time crunch. Had to toss that batch and start over...

This will make two 9” single crusts or one 9” double crust.

This sounds crazy, but this is a fabulous substitution for the water. Use Vodka that has become ice cold in your freezer. It won’t freeze, it’s alcohol. Use it in place of the water. As it bakes, the alcohol evaporates and creates small pockets of air, thus amazing flaky crust. You cannot taste the vodka, there is no alcohol left and no one will ever know you used it.. it’s wonderful! My Mother made it this way and I have been doing it for years and years. It never fails!

Not crazy at all, Susan! I've actually heard of this before but haven't tried it myself. Might just have to make a couple more pumpkin pies to see the results for myself. I'm sure my kids won't be mad!!

Instead of going to the trouble of chilling everything just use ingredients as they are. Then once the dough is made form it into patties, wrap with plastic wrap and put in fridge for at least an hour or even overnight. Also mix dry ingredients before adding water until the crisco forms little pebble sized pieces.

It has worked perfect every time.

If you're comfortable doing it this way, you totally can! I just find that using chilled Crisco helps prevents me from over mixing the dough.

I tried this recipe many years ago and to this day it's the only recipe I will use! I highly recommend trying it! I also add in 1 table spoon sugar with my flour and salt and mix my dry ingredients before adding in my shortening. I give it 5 out of 5 stars!

@Bernadette Green, Mom has used this recipe for years, but what she would do in making the crust, she used two butter knives cutting up the crisco, once it was pea size she would put the. Lid on her Tupperware bowl and. Just start shaking the bowl till a ball formed. She would divide the ball of dough into two and wrap it in sceran wrap and chill for an HR.

@Tara Kuczykowski, Baby boomer finally learning how to make pie crust. Tired of purchasing them at Walmart here in the Pgh, Pa. area. I'll also add your suggestion of sugar. Glad I spotted your comment before.

I will try adding the sugar next time I make it. Thanks for the tip!