You are here: Home / Recipes / Desserts / Homemade Pumpkin Pie Filling {Worth The Effort}

Call me Un-American, but I’ve just never been a fan of turkey. For me, and I dare say for my five kids as well, the pumpkin pie is the star of our Thanksgiving dinner. The turkey and all of the tempting side dishes served are just the opening act for the two glorious homemade pumpkin pies that I bake each year.

Yes, I hear you — baking pies from scratch isn’t an easy task, but store bought pumpkin pies can’t hold a candle to the creamy goodness of a homemade pumpkin pie, not to mention you can bake at least two of these treats for the price of purchasing one!

And so each year I carry on the tradition of baking my pies from scratch, using the Crisco Pie Crust and Pumpkin Pie Filling recipes passed down from my own mother who also baked our pies every year, a tradition that I hope at least a few of my kids carry on with their own families some day. 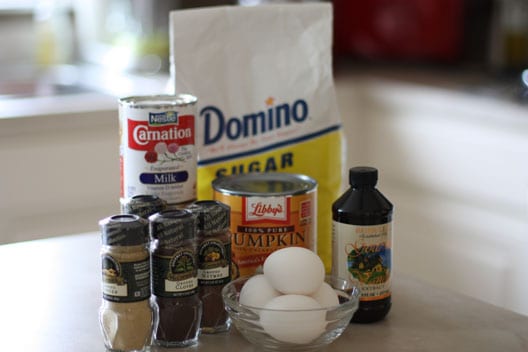 There’s not a lot of skill required for my preferred pumpkin pie filling and the ingredients aren’t out of the ordinary. The key is in the timing — make sure that you check the pies frequently during the last few minutes of cooking, testing them frequently for doneness as indicated in the recipe.

I used canned pumpkin for this batch, but you could also make your own homemade pumpkin puree. Try topping your pie with fresh homemade whipped cream for a decadent treat!

Subscribe to our newsletter to get the goods. We don't do spam.

I'm Tara: mom of 5 teens/tweens and one 80-lb. Weimaraner, who fancies herself a lap dog. Born and raised in Ohio (GO BUCKS!!!), my fave things include cooking + baking (obvs!), my JEEP Rubicon, the 4x4 beaches at OBX, and checking out the local craft beer scene... Learn more.

Many links on this website are affiliate links, meaning if you click through my link and make a purchase, I receive a small commission for referring you (at no extra cost to you).