So here’s the thing — pizzelle cookies were never really on my radar until I got married. Oh, I’m sure I’d eaten them before, but I’d never made them.

As a newlywed, my husband begged me for weeks to make pizzelles for Christmas. I kind of smiled and nodded and said I’d look into making them — you know, brushed him off, basically… I mean, I had no idea how to make them!

Then one day he mentioned how his grandmother made them every single year for Christmas. How an Italian waffle cookie became a Polish family tradition is beyond me… But at that point, I knew I couldn’t keep putting him off.

So I scoured the Internet for a pizzelle recipe (because, of course, he didn’t have his grandmother’s recipe), and using several different sites, created one that sounded like what he’d described. Only problem? We didn’t own a pizzelle iron. 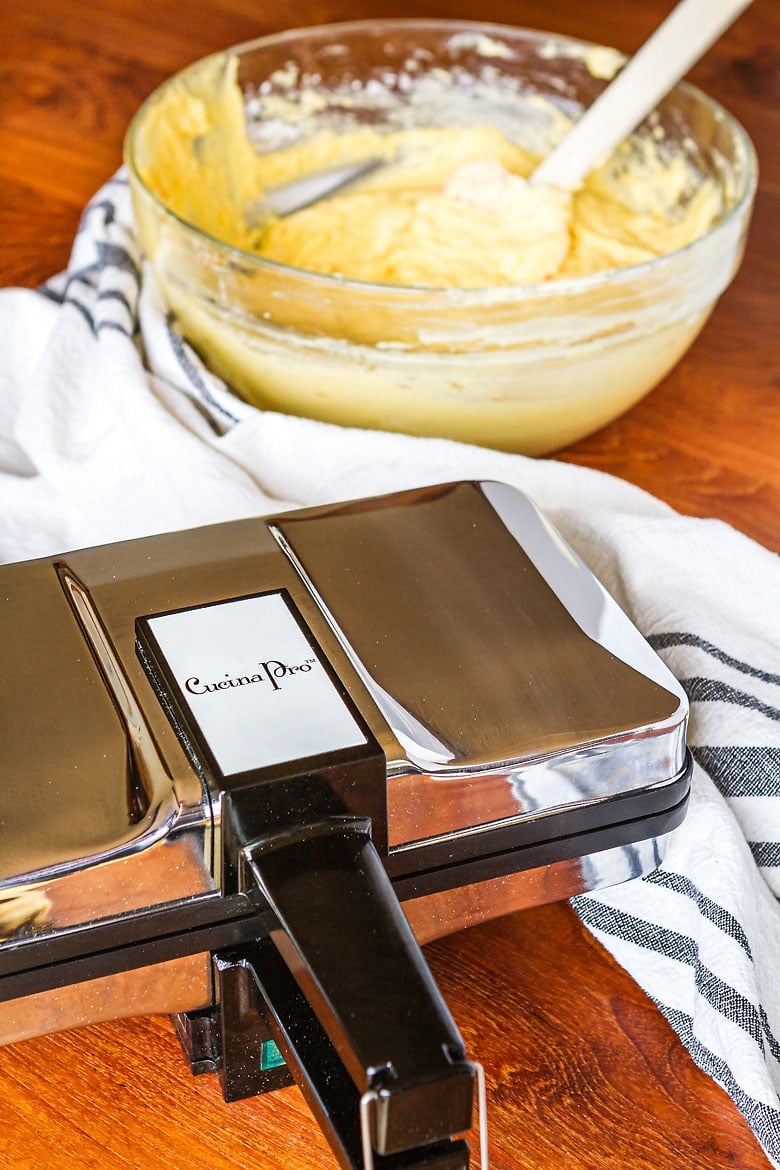 Traditionally, pizzelles were baked with a cast iron pizzelle iron over an open fire, a hot and tedious undertaking. Thank goodness for modern conveniences — we can now purchase electric pizzelle irons that make baking pizzelles simple and easy.

After a little research, I settled on this nonstick pizzelle maker. The price was slightly more than I was hoping to spend, but I’ve definitely gotten my money’s worth from it over the years… We only pull it out a couple times a year, but it’s still as shiny and pretty as ever! 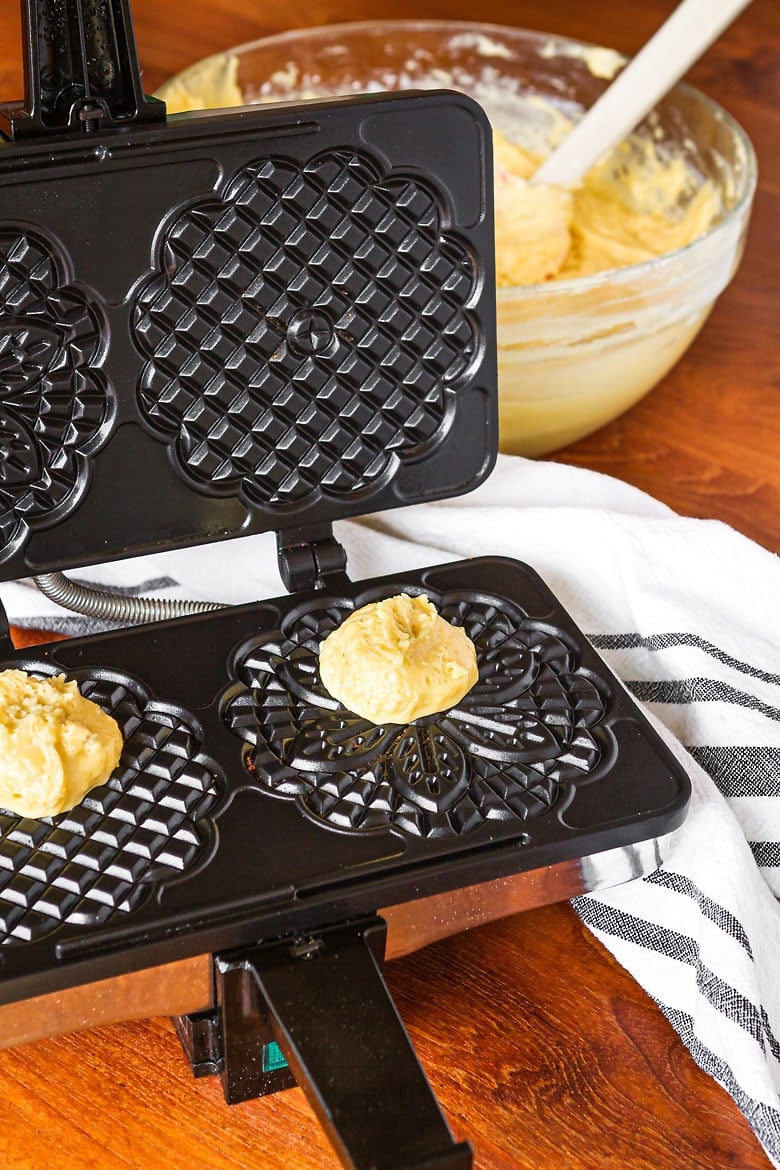 If you’re not a fan of the flavor of anise, a common spice in pizzelles that has a flavor akin to licorice (I am decidedly NOT), don’t worry. Pizzelles are wonderfully flexible when it comes to both flavoring and shaping them.

Vanilla, chocolate, almond, citrus — these are all fabulous flavors to add. And warm pizzelles can be shaped into cones, bowls, cannoli, tacos, and more. I really need to start using my pizzelle iron more throughout the year!

I opted to keep my pizzelle cookies very simple, just flavoring them with pure vanilla extract. Sometimes, I’ll change it up and use a vanilla bean paste — the flecks of vanilla bean are SO pretty. This recipe is also easily adapted into a chocolate pizzelle recipe, and my kids are always thrilled when I make chocolate pizzelles.

Whatever flavor you fancy, when you’re making a recipe as simple as this, high-quality ingredients make all the difference — so choose the best you can afford! 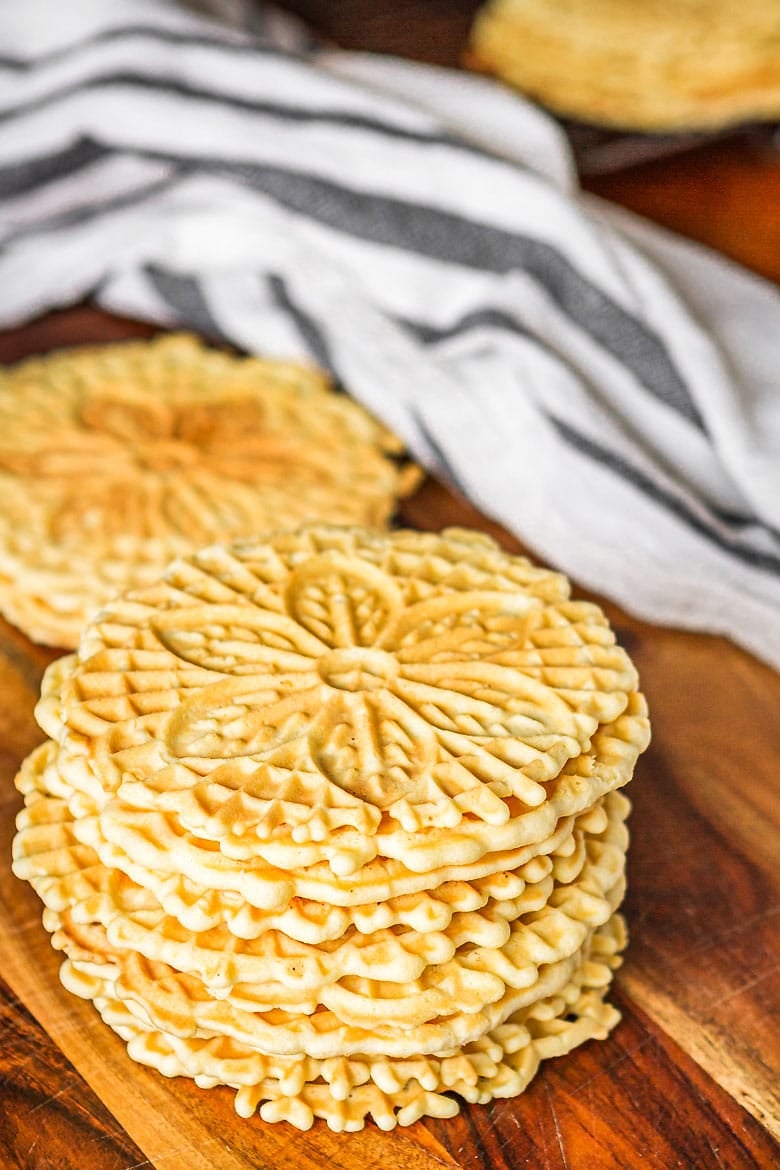 1| Even if you’re using a nonstick pizzelle maker, you may still need to mist it lightly with oil before the first use.

2| Place your batter slightly behind the center of the mold because it will spread forward as you close the lid. I highly recommend this medium cookie scoop for measuring perfect portions and releasing the batter easily.

3| Speaking of closing the lid, do it slowly to allow steam to escape easily and not burn the heck out of your fingers. Don’t ask…

4| Have a cooling rack easily accessible next to the pizzelle maker. I’ve found that the best workflow for me is to use a wooden spatula to remove the cooked pizzelles from the maker to the cooling rack, start another batch of pizzelles cooking, and then move the cooled pizzelles to a stack to make room for the next round of fresh and hot ones.

5| The pizzelles will be very flexible when you remove them from the pizzelle iron, and then they will crisp up as they cool. I actually prefer them after they sit for about a day, but they don’t often last that long! If you want to mold your pizzelles into a different shape, do it while they’re still warm and flexible. 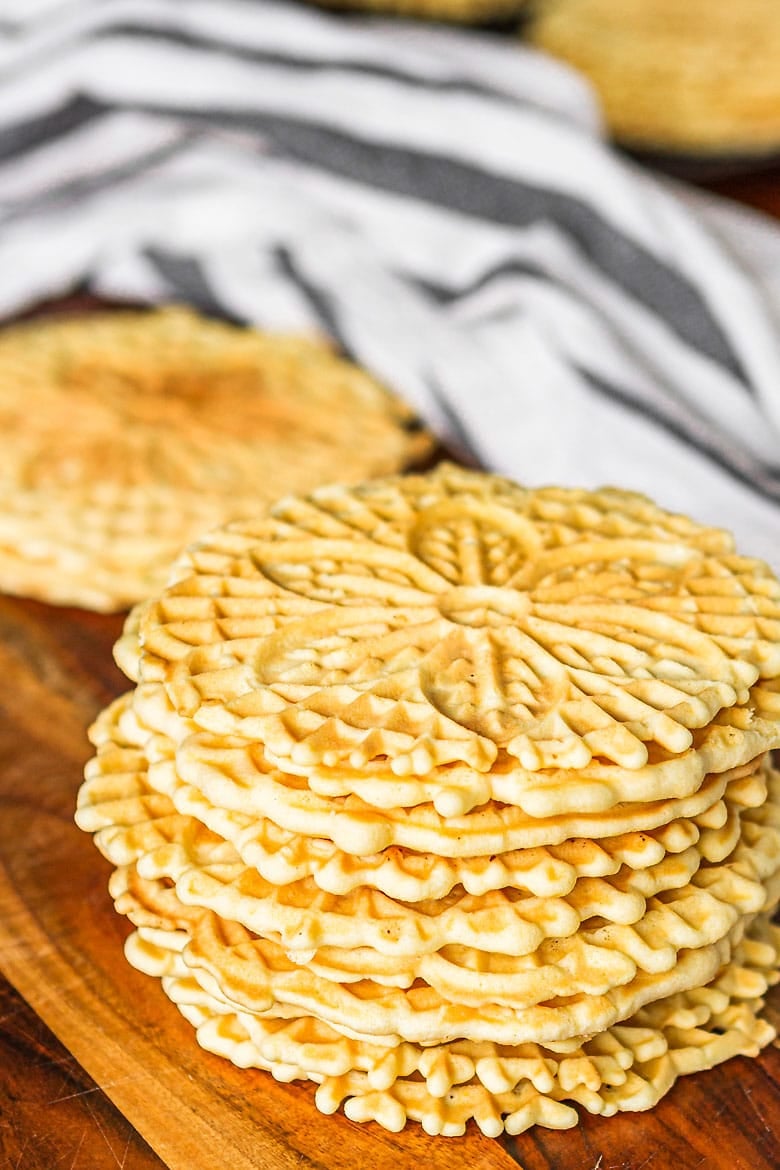 Over the years, making this classic pizzelle cookie recipe has become one of our family Christmas Eve traditions. My kids love to help by pulling the cooked pizzelles off the pizzelle iron, while I get another batch cooking. Then they stack the cooled pizzelles up before the next batch is ready. I’m hoping they continue it with their own kids someday! 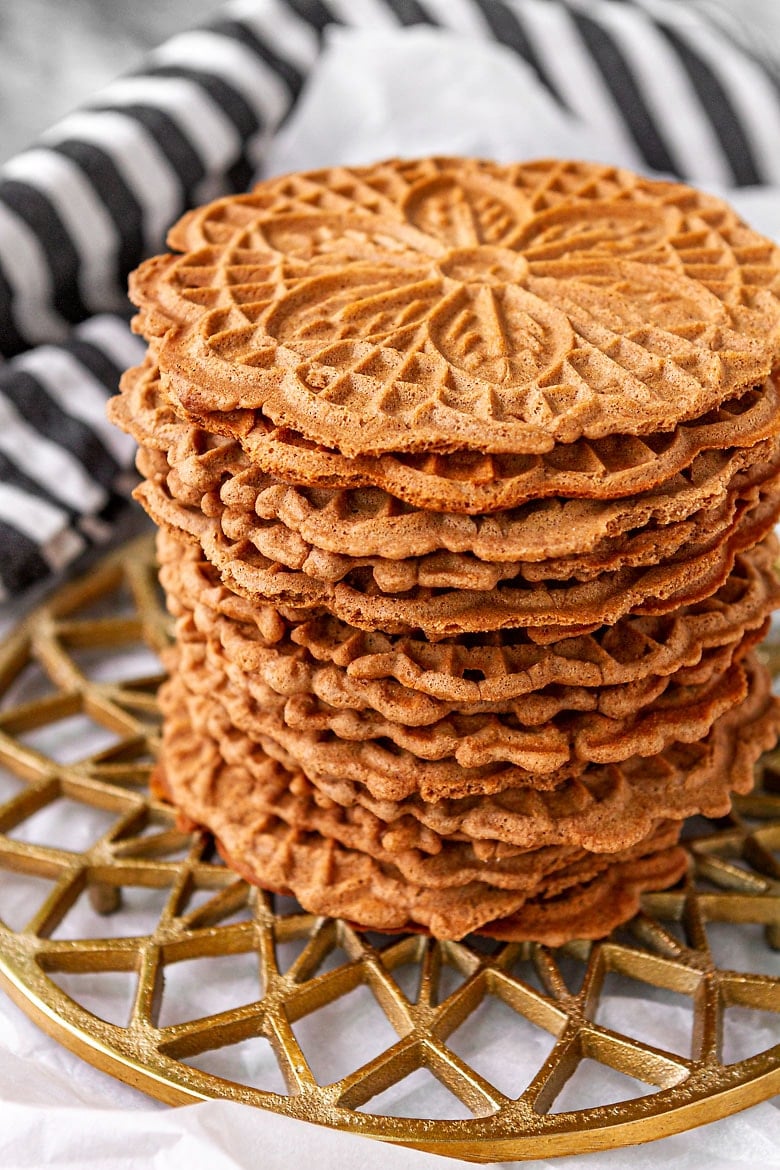 Want to try a new take on this pizzelle cookie recipe? In addition to the chocolate pizzelle pictured above, you can easily modify the vanilla pizzelle recipe above to make the variations below:

— substitute 1 tablespoon of pure almond extract for the vanilla extract in the recipe above.

I’d love to see how your pizzelle cookies turn out… Tag me @Unsophisticook on Instagram or use the hashtag #Unsophisticook so I can check it out. Enjoy!

A few tips I learned from my aunt. The size of eggs determine the amount of flour. Don’t add full amount at first. Batter should be just barely sticky when rolled. For anise cookies- my favorite!- use anise oil. Not extract. Hard to find but I order well before the holidays so I have it on hand. I sometimes make lemon or chocolate as well.

Thank you for the tips! I will add some notes to the recipe for both. How much anise oil would you recommend using for a batch? And is there a brand you prefer?

I add up to 4oz ground almonds....delicious

Love this idea -- will have to try it!

My family is polish and it’s a tradition to make these as well.

Fascinating! I'm planning to try some new flavors this year, since it looks like we'll be at home for the foreseeable future.

This is really amazing! Had no idea it is so easy to make. Thank you!

how can i keep my pizzelle's crisp. it's very humid here . is there someway to recrisp them

@carol a bidinotto, preheat the oven to 210 degrees and pop them in for a couple of minutes. Should crisp them right up! Also, after they’re done cooking, leave them out over night I read somewhere. That helps people who are in warm climates keep them crispy. I usually store them in a container and keep the lid cracked opened personally. Good luck!

@Tara Kuczykowski, I store mine in a popcorn tin ( like the ones you get at Christmas time ). They stay crisp until all are eaten and I don’t freeze mine.

Great question, Carol! There's a few things you can do. First of all, let them cool on a wire rack so the air circulates around them. If you stack them too soon, they will basically steam each other. If they're still not as crispy as you'd like, place them on a cookie sheet and bake them at 350 degrees for about 2 minutes. Finally, after you have them at your desired texture, store them in a ziploc bag in the freezer. Thaw on a wire rack, and they should be as crisp as when they're made.