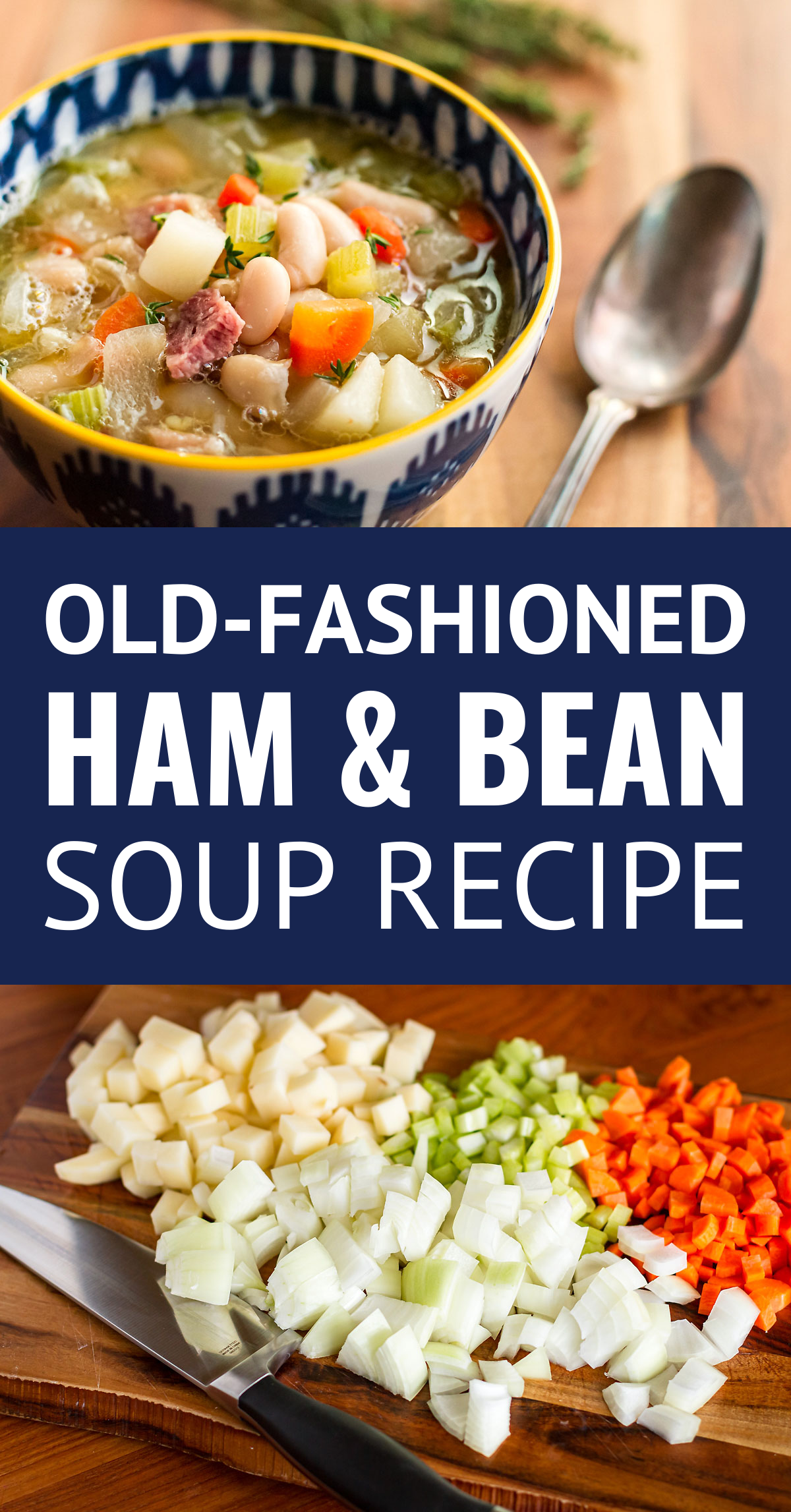 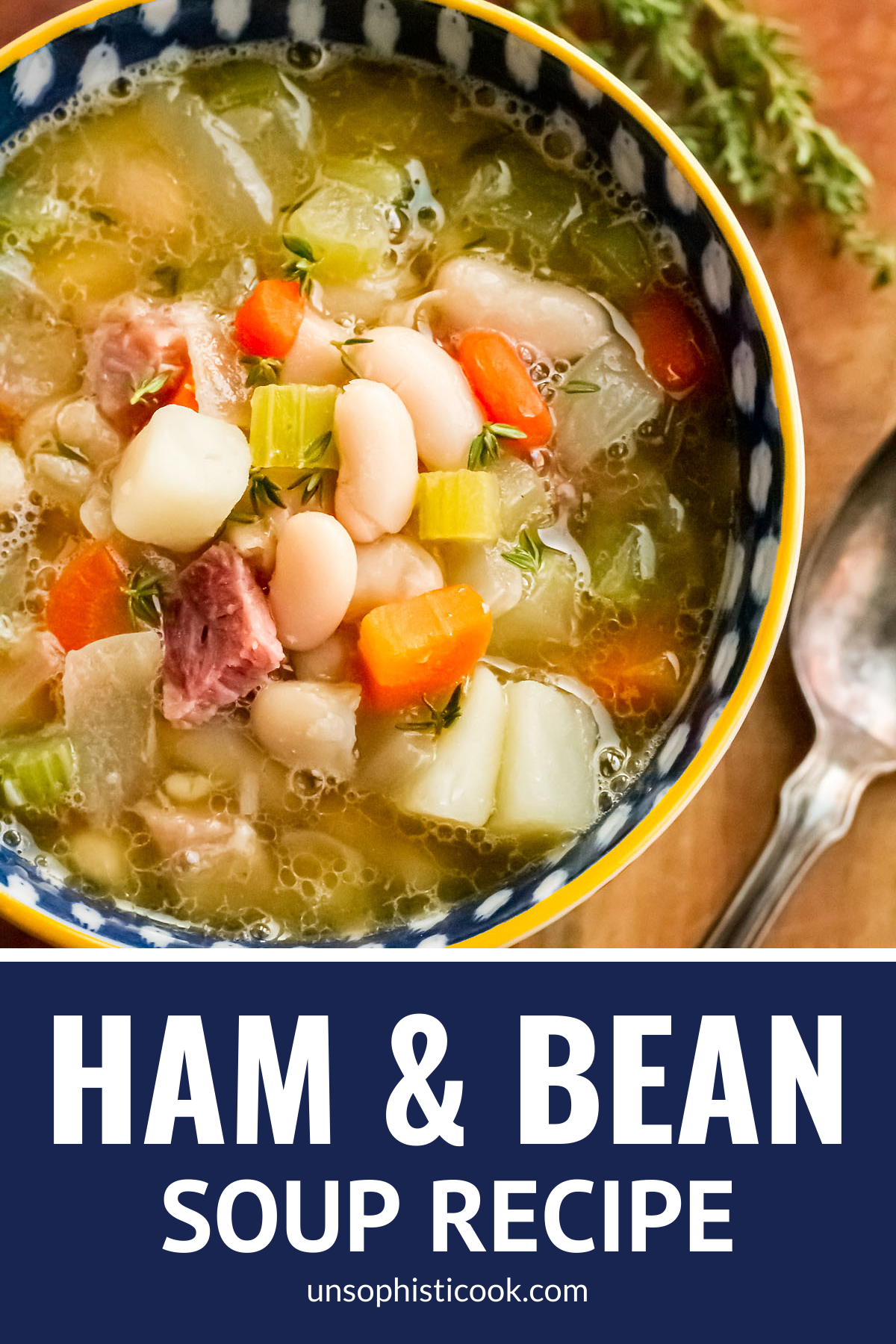 This hearty old fashioned ham and bean soup recipe, filled with diced carrots, celery, and potatoes, is a great way to use up the ham bone and any leftover ham after a bone-in ham dinner… A super easy recipe for ham soup & SO cozy and delicious on a chilly day! 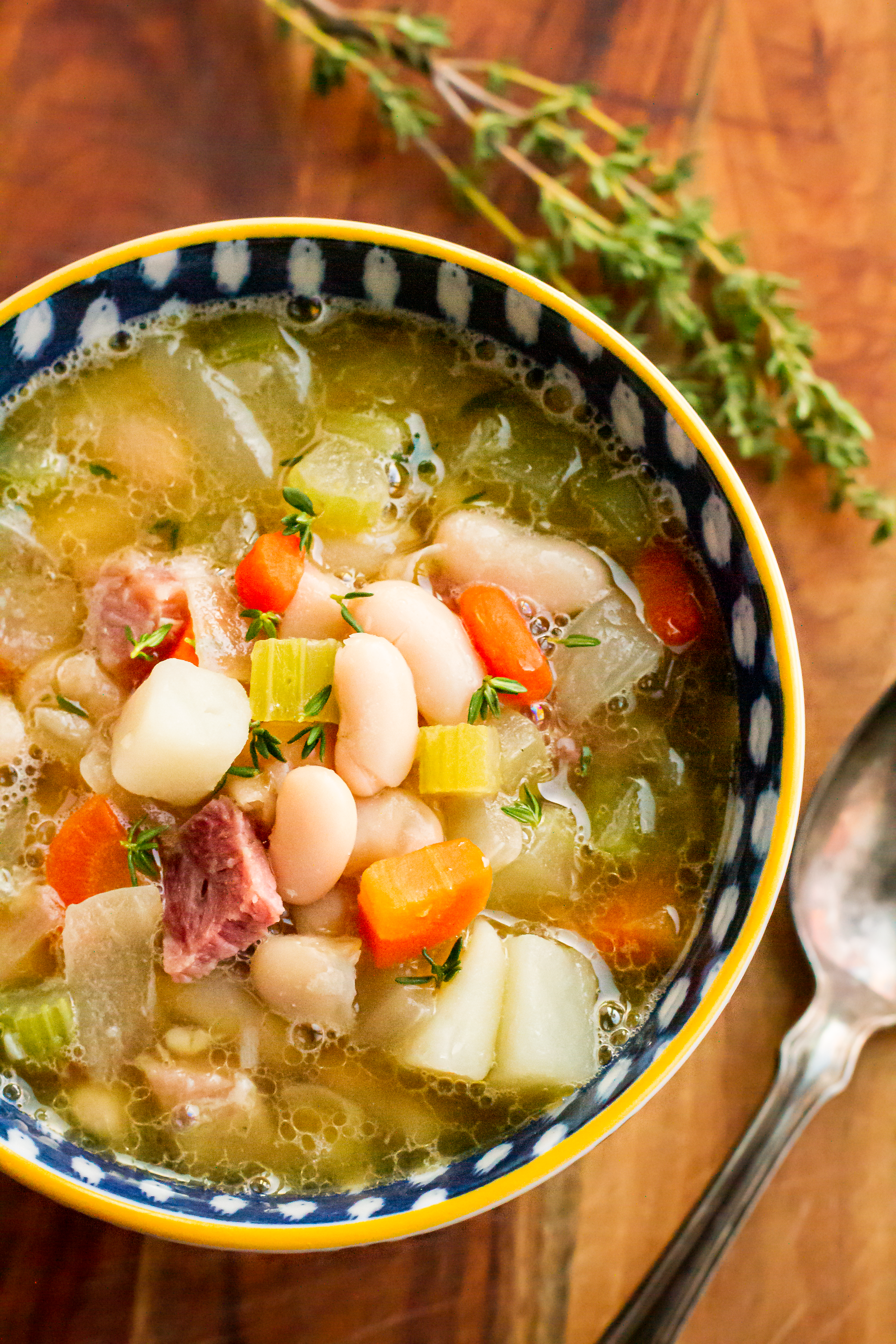 As I’m writing this, it’s currently thunder storming outside after a balmy 70-degree day. Never mind that it’s December 23rd and this is Ohio…

It’s safe to say that a white Christmas is NOT in the forecast, but we’ll make the most of the next couple of days. Christmas Eve will be filled with our many traditions, including baking vanilla pizzelle and chocolate pizzelle as a family and watching A Christmas Story on repeat during our sibling gift exchange.

Because we’re going to my Dad’s house on Christmas Day, I’ll also be making our Christmas dinner on Christmas Eve — pork roast with green beans and gnocchi, this mashed potato recipe with cream cheese, and Hungarian cucumber salad. Mmm, I can’t wait!

I know many of you will be making ham for your holiday meal though, and I’m betting you’ve often wondered what to do with a ham bone when you’re done. So I wanted to share my very favorite recipe for using up leftover holiday ham — this easy ham soup!

I actually made both a turkey breast and a ham for Thanksgiving this year, and I saved the remaining cooked ham and the ham bone in the freezer for the express purpose of making this leftover ham and bean soup recipe.

BTW, if you are in need of an easy ham recipe, you TOTALLY need to try this super simple Instant Pot ham recipe! 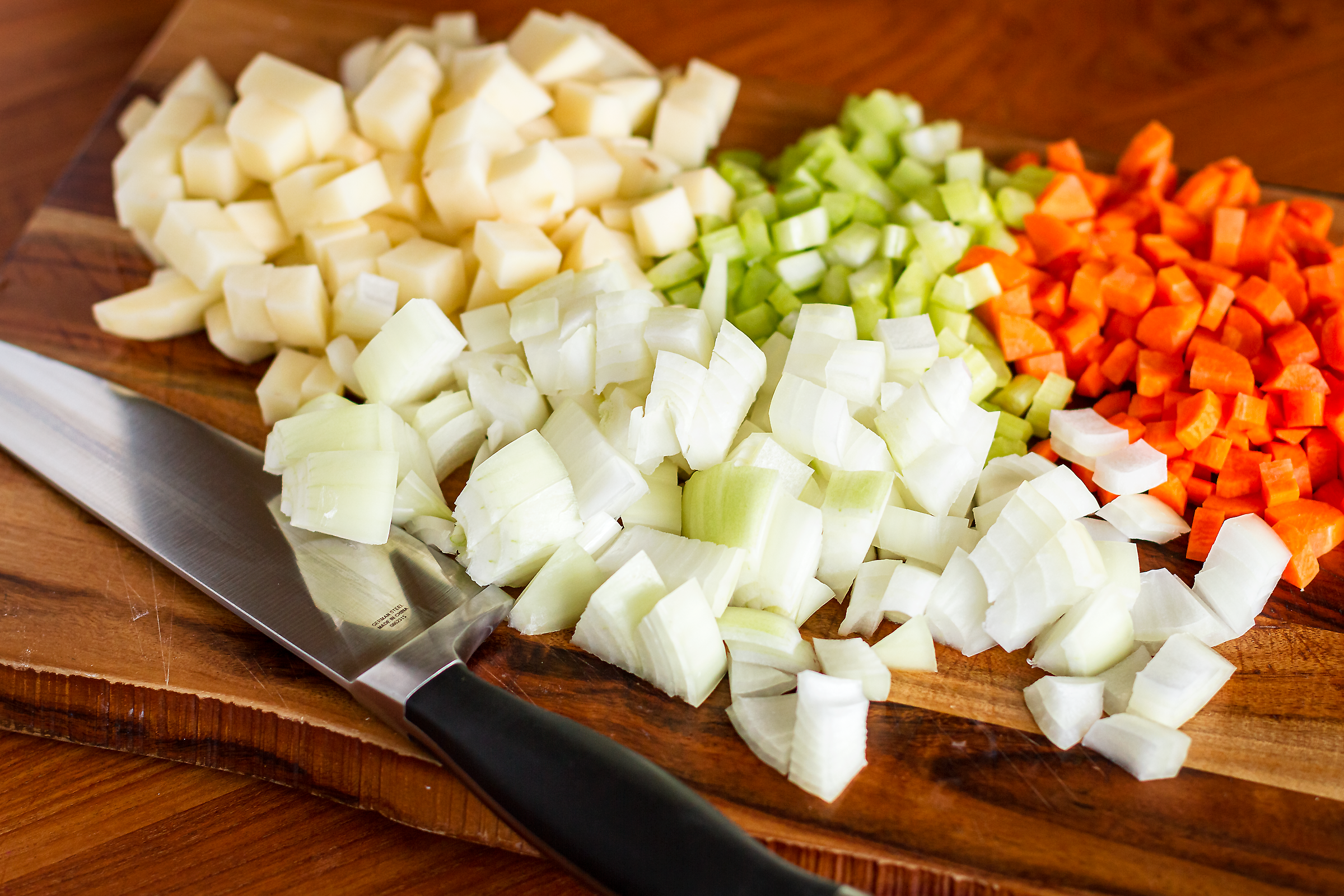 As we’ve established, you’ll need a ham bone and some scraps of leftover chopped ham for this recipe. Luckily leftover ham and the ham bone will keep in a freezer-safe container in the freezer for up to two months.

So this great recipe is a fantastic way to use them up — even if it’s not soup season or you’re just not in the mood for soup right away. Simply pull them out when you’re ready to make this leftover ham soup, and you’re good to go!

Don’t have a ham bone on hand? In a pinch, you could substitute a ham hock to achieve a similar flavor to ham bone broth. But there’s not much meat on them, so you’d also want to grab some ham steaks to chop up for the soup.

onions, carrots, and celery — these three aromatics diced in 1/2-inch pieces make up the base for this flavorful soup. This veggie chopper makes chopping your vegetables SO quick and easy!

garlic — fresh garlic cloves pressed through a garlic crusher are my choice, but if you’d rather mince them or even use the jarred stuff, it’s your decision!

russet potato — typically I prefer Yukon gold potatoes, but for this recipe I like a good russet potato because they maintain their texture better.

white beans — my favorite kind of bean for ham soup is canned cannellini beans, but they can be a bit difficult to find at times.

Canned navy beans or great northern beans are also a great option. You can even cook your own dry beans if you feel up to the whole overnight soaked beans and cook the next day process.

fresh thyme & bay leaves — if you want to get fancy, you can make a bouquet garni with these by tying them together with bakers twine.

I admit it does make it slightly easier to fish them out when the soup is done. But honestly, it’s not that hard to pick out the thyme stems and each bay leaf at the end. So I just toss them all in freely! 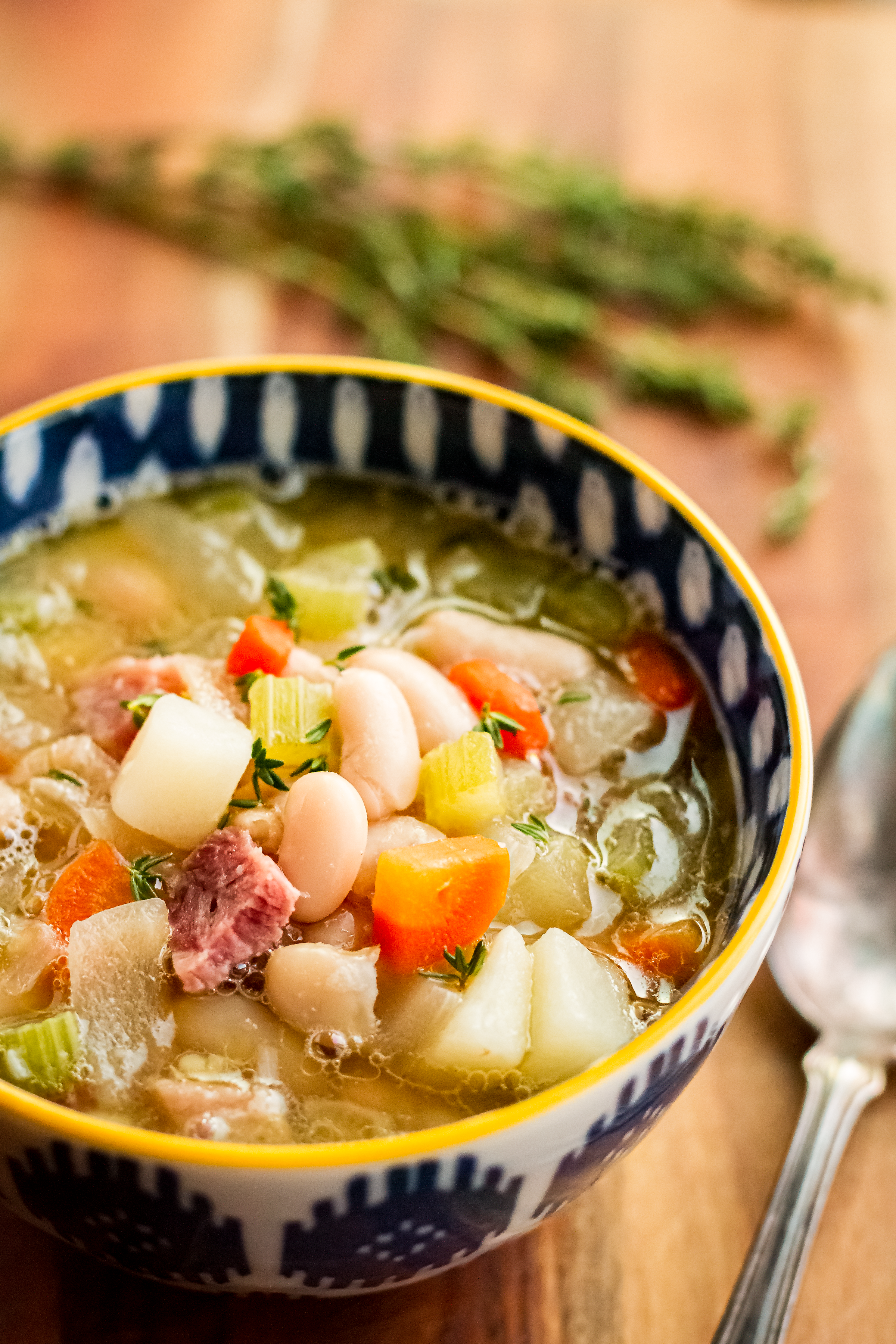 How to Make Ham and Bean Soup With Ham Bone

Start by placing the ham bone in a large pot, along with the 8 cups of water. Simmer the ham bone for about 45 minutes, until it’s very fragrant. Then remove and discard the bone.

I like to use my heavy duty Le Creuset Dutch oven for this purpose. They can be pretty pricey, but they literally last forever! Definitely an investment you’ll be glad you made…

Finally, add all of the remaining ingredients into the pot with the ham broth, including the leftover diced ham. Let this simple soup simmer for about 15 more minutes, and it’s ready to eat! 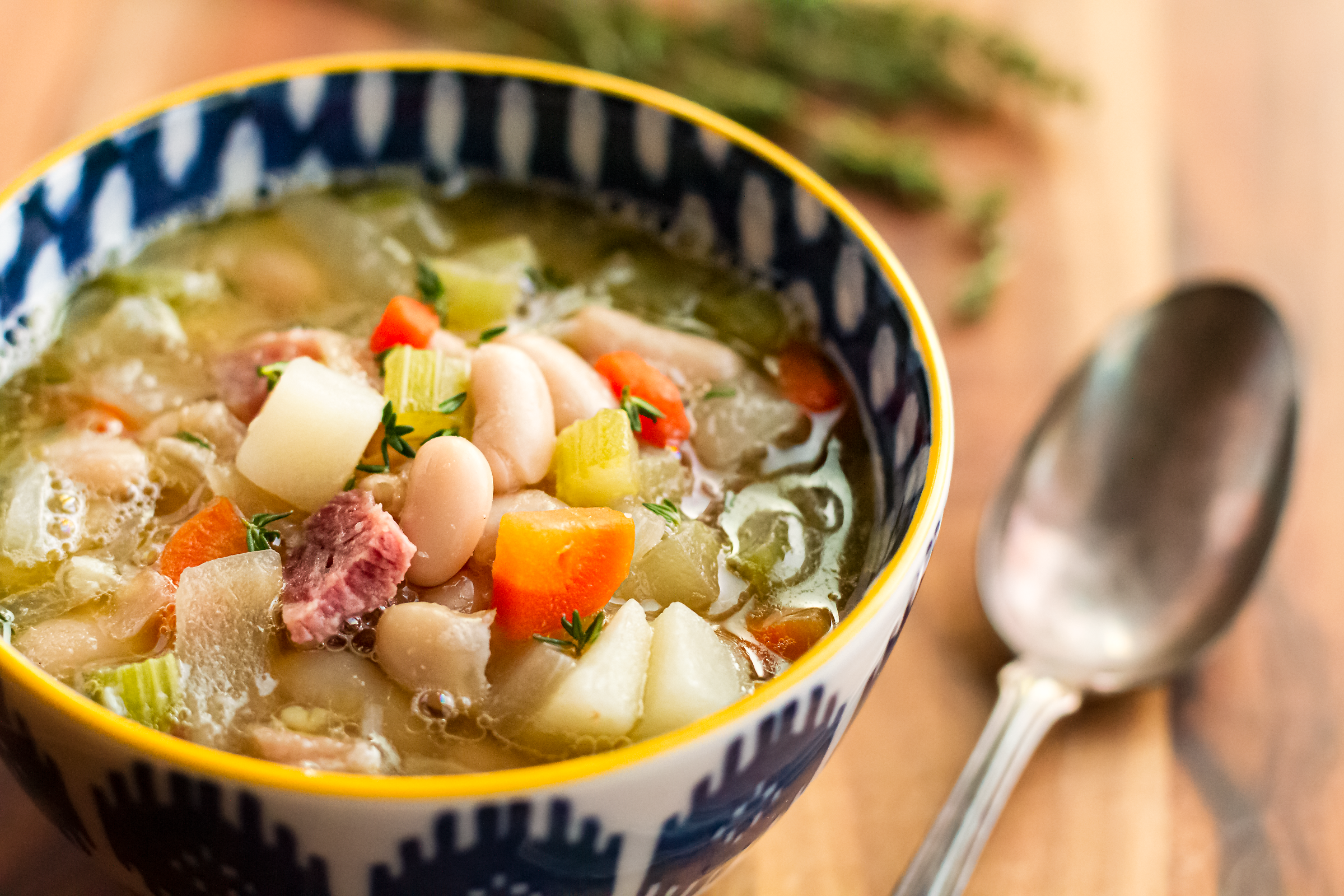 This rustic ham and bean soup with potatoes is SO delicious on a cold winter day — and even a warm one for that matter LOL! My whole family adores this hearty soup…

In fact, I’m really wishing I had made more. After my boys went back for seconds, there wasn’t much left over for the next day.

Just typing that makes me laugh thinking about having leftover ham soup that was already made with leftover ham… But as with so many soup recipes, this ham bone soup recipe is even better after sitting overnight. Next time I will double it for sure!

Reheating: For the best results, thaw in the refrigerator overnight and reheat leftover soup in the microwave or on the stove top over medium heat.

If you like this ham and beans recipe, you might also enjoy these other delicious soup recipes:

Just made this and it is wonderful. I did use a smoked ham hock and added chunks of ham as an addition.

So happy you loved it, Sandy! It's definitely a favorite around here, too.

I made this soup tonight for dinner with a leftover ham bone from last night’s dinner party. I left out the potato and used thyme powder from my spice drawer instead of fresh sprigs. I added a can of diced tomatoes and cabbage but otherwise followed the recipe. It turned out AMAZING. My family loved it! Perfect for a cold, winter night.

Sounds delicious, Bree! Leftover ham bones are one of my favorite kinds of leftovers.