You simply can’t go wrong with this easy pressure cooker Instant Pot ham recipe… All you need is a bone-in spiral ham + crushed pineapple & brown sugar to make the easiest, most delicious holiday ham (or anytime ham) ever! 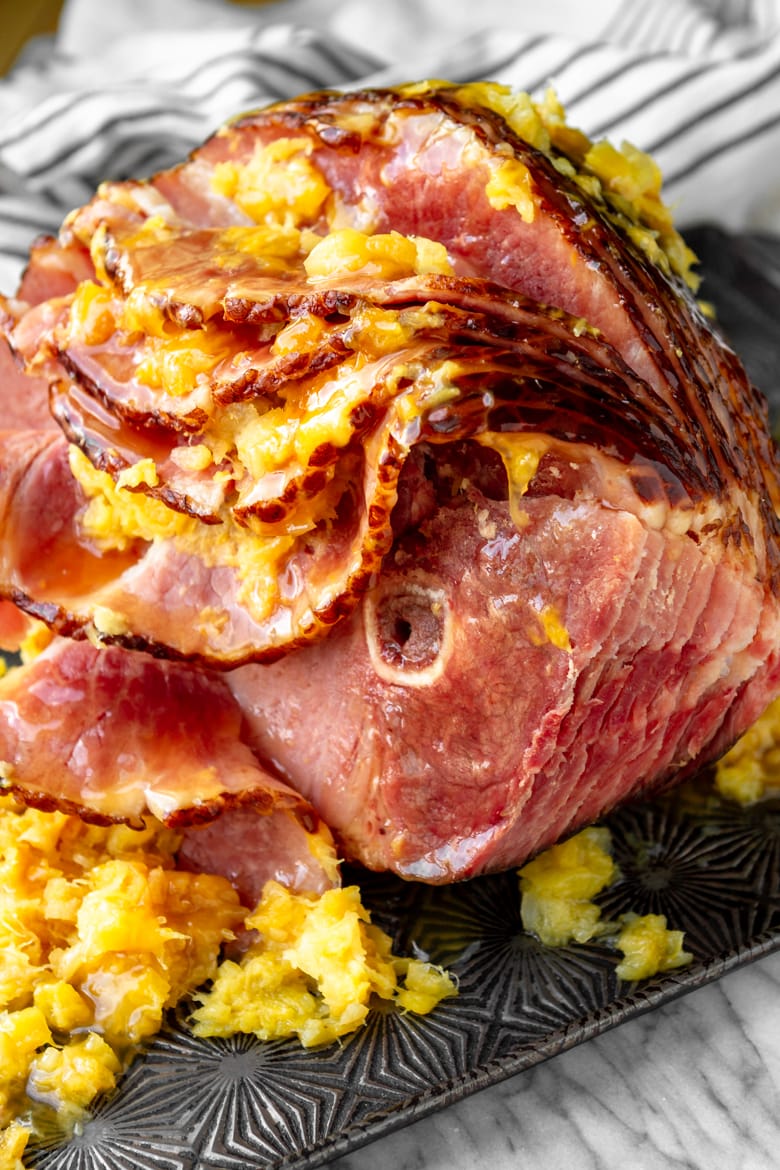 This recipe was created in partnership with the Ohio Pork Council. Thanks for supporting me and the brands I love!

Ham is kind of a big deal around here… As in you’ll almost always find it on the menu for any holiday dinner. We’re talking Easter, Christmas, even Thanksgiving (along with a deep fried turkey, of course)!

Why? Well, ham pretty much universally liked — at least in our home. Plus spiral hams are naturally sized to feed a crowd. And they’re so EASY to make! Especially when you make them in your Instant Pot.

What, you’ve never had an Instant Pot ham? Well, let me tell you, you’re TOTALLY missing out!!

Thanks to the closed cooking environment, ham in the Instant Pot is the most tender, juicy, and flavorful ham you will ever eat. No more over-baked dry and tough ham… Just perfectly cooked, sweet, and succulent ham in a fraction of the time it takes to bake it in the oven. 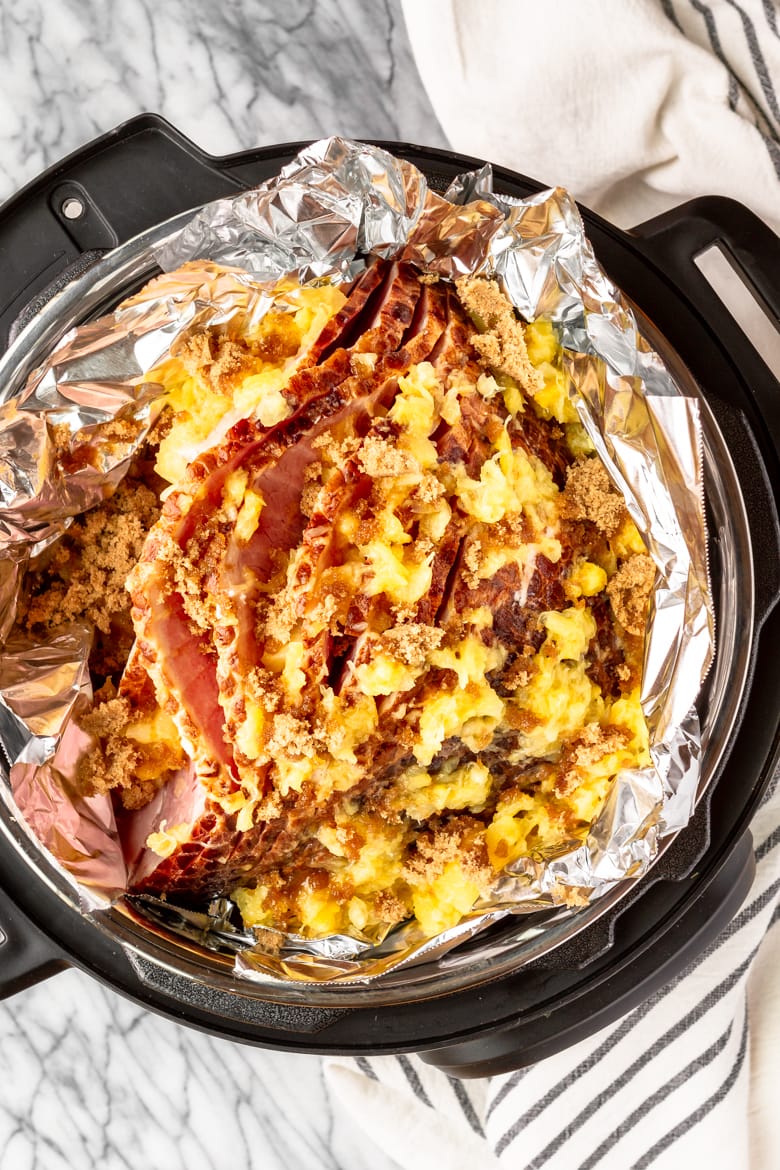 How Long To Cook Ham In Instant Pot?

I wish you could have seen the look of horror on my mom’s face at Christmas when she saw me pulling the ham out of the refrigerator after all of the guests had arrived.

Meanwhile, I’m as cool as a cucumber…

Because the very best thing about pressure cooking ham in the Instant Pot is that it takes less than 30 minutes! Seriously, no joke — AND that includes the time to come to pressure, along with a quick resting period at the end.

To be a little more specific, I’ve found the perfect length of time to cook ham in the Instant Pot is 1.5 minutes per pound, with an additional 5 minute resting period at the end.

6-lb. Bone-in Ham Example: you can estimate about 10 minutes for the Instant Pot to come to pressure, 9 minutes of actual cook time (multiply 6-lbs. by 1.5 minutes), and then an additional 5 minutes of resting time when it’s done cooking. So the total cook time from start to finish would be approximately 24 minutes.

See? MUCH faster than the recommended 12-15 minutes per pound when baking a ham… 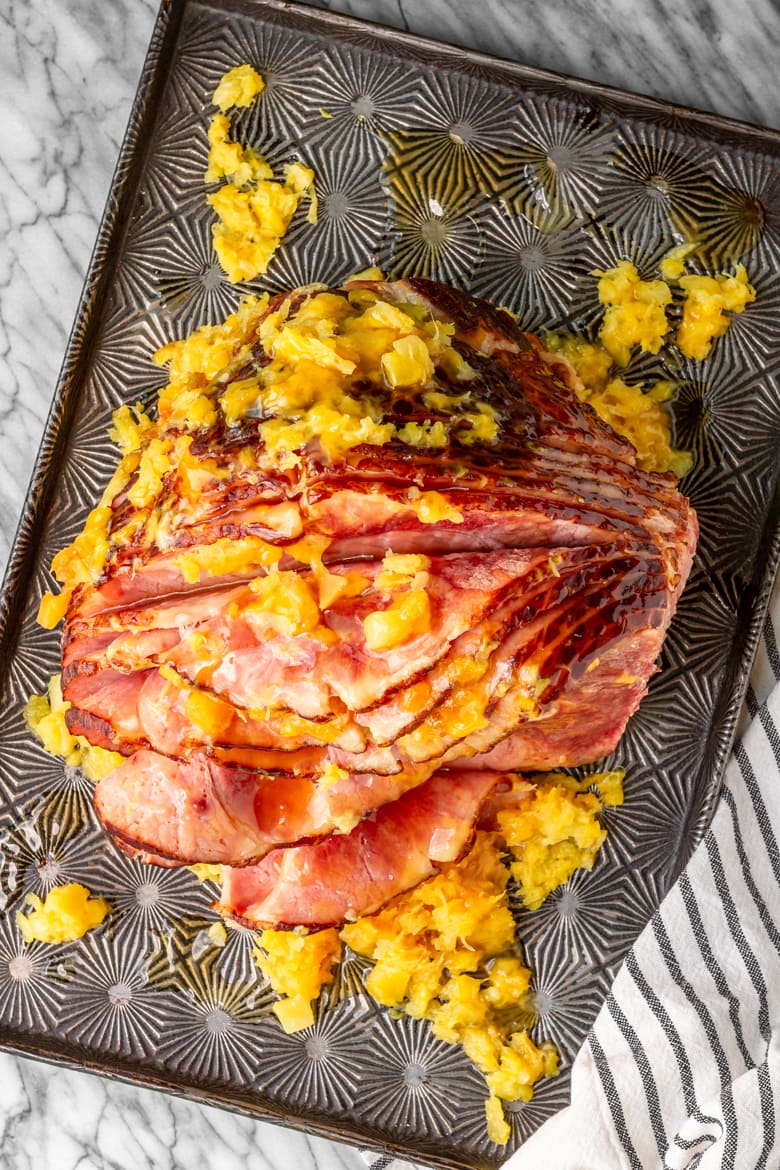 Choosing A Ham For The Instant Pot

Right now you might be wondering if you can make ANY type of ham in an Instant Pot, and the answer is, YES, you absolutely can. But I wrote this particular Instant Pot ham recipe with a bone-in spiral ham in mind.

How large of a ham you can select is limited by the size of your Instant Pot. If you have the 6-qt. size, I recommend not going larger than about 6.5 pounds. For an 8-qt. Instant Pot, you can size up slightly to a 7-8 pound spiral ham.

But the good news is that even if you buy a ham that’s slightly too large, it can easily be salvaged. Just slice a small section off to make it fit. Save the extra sliced-off piece and any leftovers, along with the ham bone after carving, to make this delicious ham and bean soup!

For reference, the ham pictured is a 7.5-lb. Kirkland spiral sliced half ham from Costco, which I pressure cooked in my 6-qt. Instant Pot. It definitely tested the limits of my pot (even after cutting some off), so I’d suggest digging through that pile of hams to find one that’s a little smaller.

You might consider picking up the 8-qt. model to pressure cook a larger ham — I own and highly recommend both sizes. 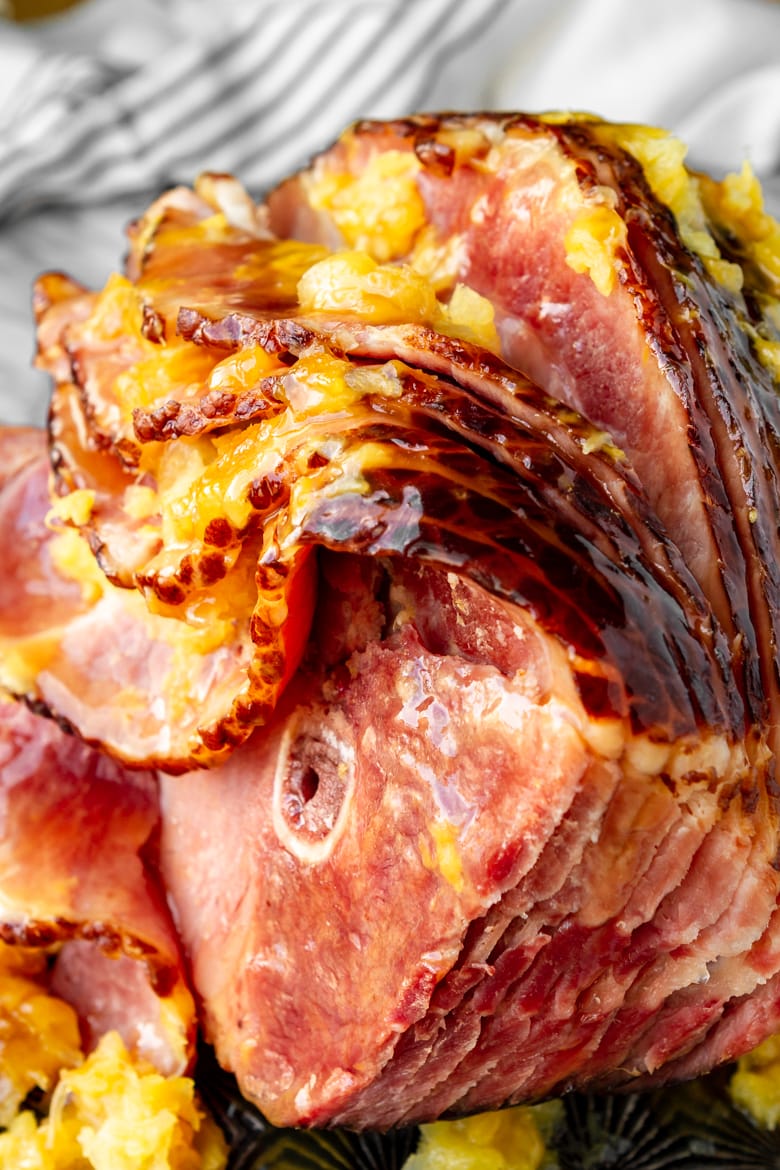 How To Cook A Ham In An Instant Pot

Cooking a bone-in ham in the Instant Pot isn’t much different than making my Instant Pot salsa chicken.

Overall, the ham in Instant Pot technique is very similar: you cook the ham on a trivet, remove it after a short Natural Pressure Release (NPR), and then sauté the remaining liquid from the pineapple, brown sugar, and ham drippings to make a delicious glaze.

A key difference is that you’ll use a couple of pieces of heavy duty aluminum foil to form a sort of bowl around the ham. A cup of water goes in the bottom of the Instant Pot insert, along with the trivet, and then the loosely wrapped spiral ham is set on top.

Pour a 16-oz. can of crushed pineapple over top of the ham, tucking some pineapple in between the spiral slices. Then sprinkle 1/4 cup of brown sugar over the top.

Pressure cook the ham according to the notes in the recipe, and then allow the ham to sit for about 5 minutes before releasing any remaining pressure. Remove the ham, allowing any juices and drippings in the aluminum foil “bowl” to drain back into the insert pot.

If you want to make the pineapple brown sugar glaze (and trust me, you totally will — it’s AMAZING!!!), turn your Instant Pot on to Sauté. Then mix 1 tablespoon of cornstarch into 2 tablespoons of water, and pour the mixture into the water/juice/drippings.

Whisk the glaze as it’s cooking until it’s sufficiently thickened. You can pour it over your cooked ham, or serve it on the side for guests to drizzle at will. 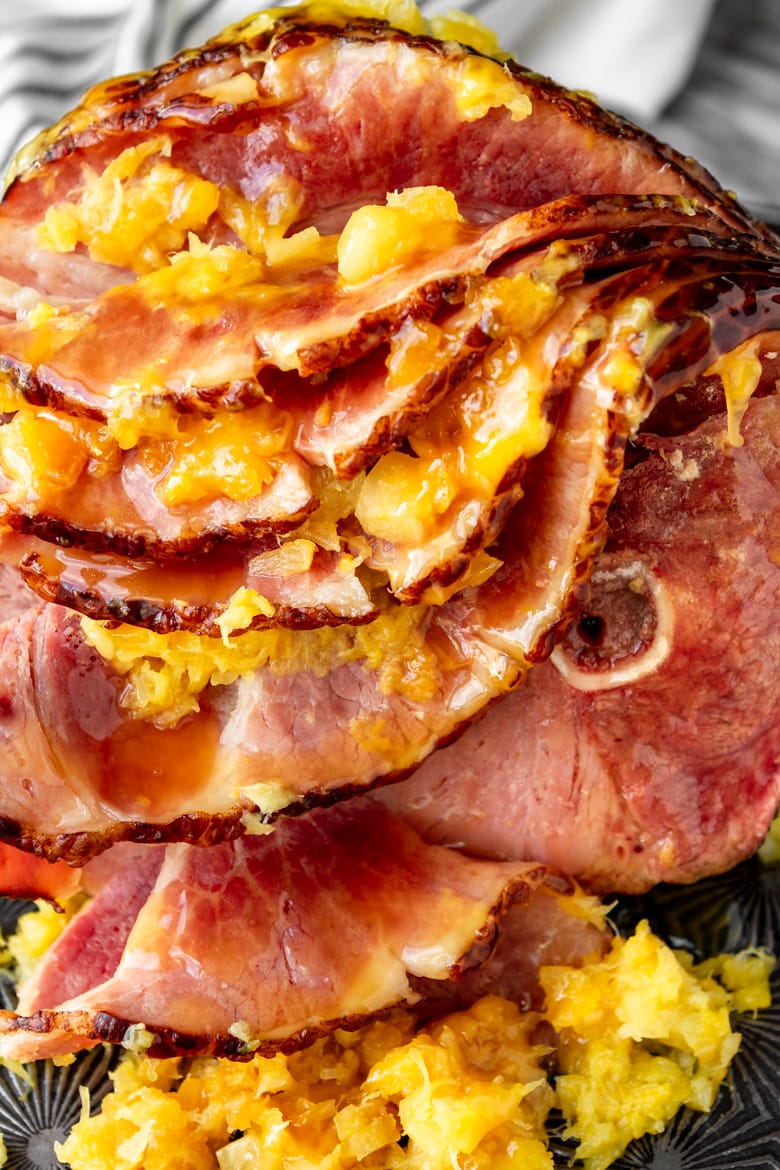 Forget the over-priced Honey-Baked Ham, this EASY Instant Pot spiral ham is sure to be the star of your holiday table! But it’s also simple enough to enjoy for a Sunday dinner any time. In fact, I strongly suspect that you may never ever BAKE a ham again!

P.S. The leftovers are pretty darn delicious, too…

Easy Side Dish Recipes To Serve With Pressure Cooker Ham

Wondering what to serve alongside this Instant Pot ham recipe? Here are a few of our very favorite tried and true side dish recipes:

If you’re a lover of all things pork, check out these other fabulous pork recipes courtesy of the Ohio Pork Council!

What kind of steamer basket do you use for hams?

Hi Cindy! I just use the trivet that comes with the Instant Pot and create a foil "bowl" as outlined in the post and recipe.

How would I adjust if using 10 lb ham? Thanks

You won’t need to adjust anything other than the cook time. However, I’m not sure you will be able to fit a 10-lb. ham into even an 8-qt. Instant Pot. You might be able to make it work if you slice some chunks off the side, but if you find it difficult to close the lid, the pot is too full.

Hi Ruthann! I don't have a picture of wrapping the ham, but there is a video in the post that shows preparing the recipe from start to finish, including wrapping it at the beginning. If you're having trouble locating it, you can also watch it on YouTube here: https://www.youtube.com/watch?v=QzydnfWbTKw

Is the foil essential to the recipe?

Hi Dawn! It helps keep the crushed pineapple out of the glaze, but I wouldn't say it's essential if you don't mind having it mixed in.

This really is the best way to cook a ham! So tender and sweet!