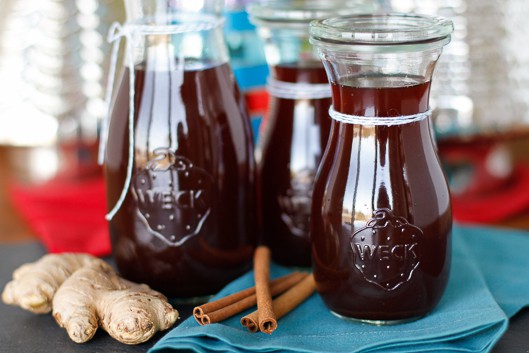 When I shared my double strength simple syrup recipe last summer, I mentioned that it’s also really easy to make infused syrups at home by adding some fresh mint leaves, vanilla, etc. I know some of us are less adventurous than others in the kitchen, though, and therefore might be a little hesitant to just start adding flavors to a simple syrup without an actual recipe. So I thought I’d share with you all how to make ginger syrup!

Homemade ginger syrup is really easy to make — just add finely chopped fresh ginger root to sugar and water, along with a touch of cinnamon and pure vanilla extract. The resulting ginger simple syrup is sweet and complex, with a zing that you just don’t find in store bought ginger syrup.

Ginger simple syrup is fantastic added to club soda, creating an easy homemade ginger ale. It also makes a fabulous homemade gingerbread latte that I would choose over the Starbucks version any day!

Presented in these gorgeous Weck juice jars (seriously, how adorable are they?!?) with some colorful bakers twine, this homemade ginger syrup would make an awesome Christmas gift for your favorite foodie. I’ve already got one bottle earmarked for a good friend who wants to try to recreate a drink called the “Oddfellow” from a local restaurant — he’s gonna love it!

Simple syrups keep for up to six months in the refrigerator, but I’m guessing you’ll use it up long before then. I actually made a double batch earlier this week, and if you want to try that, I recommend using a dutch oven pan to avoid having the syrup boil over. You’ll also probably want to boil it almost twice as long, because it will take longer to reduce the larger quantity.

Now that you know how to make ginger syrup, what other flavors would you like to try?

WOW! This is such a delicious simple syrup (never knew it was so easy to make)! Saved this for future use again- we used this for a nice holiday beverage

So happy you loved it, Kati. Happy New Year!!

Do you strain it before putting in jar?

Great question, Gail! It's ultimately a matter of preference. If you dice the ginger finely enough, you really don't need to. But you certainly can if you want a ginger syrup that's totally lump free. Enjoy!

I just made this. So good! I loved it with just the ginger and cinnamon, but wanted more of a gingerbread vibe, so I added a TBS of molasses…holy cow! So good. Thanks for the great recipe and idea

Oh, that sounds fabulous, Wendi -- thanks for the suggestion! Definitely going to try that with my next batch.