My family loves my regular German pancake recipe, but when I received a large box of SweeTango apples late last week, I started throwing around the idea of an German apple pancake recipe. I gave it a whirl this afternoon with spectacular results, but first let me tell you just a bit about SweeTango apples. 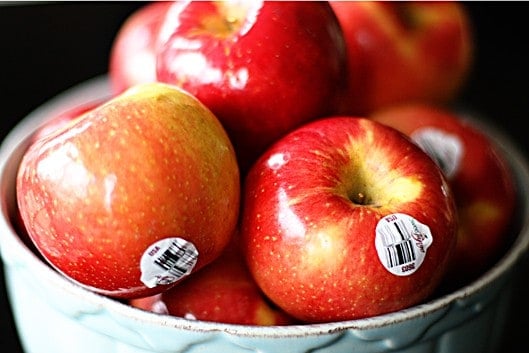 SweeTango is a new apple that’s a cross between Honeycrisp and Zestari varieties. It was available in 2010 in limited volumes but will be available nationally this fall. As you can imagine based on their “parents”, they’re sweet, juicy, crisp, and utterly delicious. Look for these beautiful deep red over a yellow-breaking background apples at your local Walmart store now!

Now back to the German apple pancake recipe I was mulling over — having not cooked with the SweeTango variety previously, I was a little worried about whether they would simply turn to mush, but they held their shape nicely and produced lovely, tender and flavorful apple slices within the pancake.

I mentioned on Facebook as I was trying out the recipe that the smell was divine and that if the pancake tasted half as good as it smelled, it would be a hit. And a hit it was — even garnering a spontaneous hug from my nine-year-old son after he tasted it! 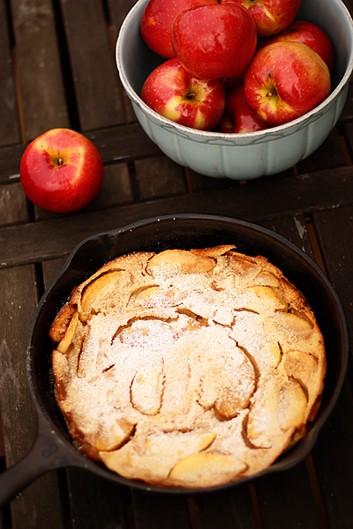 If you don’t have a well-seasoned cast iron skillet, I highly recommend making the investment. I used my trusty #8 Wagner, but any non-stick pan that can go from stove top to oven will work for this recipe.

Don’t assume because it’s a pancake this recipe is only for breakfast or brunch — it’s perfect for an afternoon snack or dessert too.

If you like this German apple pancake recipe, you might also enjoy these other delicious brunch recipes:

I was looking for an apple German pancake and yours popped up. It looks wonderful and it's in my oven as I type. Thanks for breakfast! I'm signing up for email delivery because I want more!! Thank you!

Glad you found it, Laurie! I haven't made this for awhile -- I definitely need to get it into the rotation for fall with all of the yummy apples available.

I was so excite to find this in Pinterest! My grandmother made these on special occasions. It is one if my very fondest memories. She called this (excuse my spelling) Apfelfannekuchen. Sometimes she made this with plums from her tree- and it was just as delicious. She did not bake these though. She started with the batter in a cast iron pan, fanned the apples over the top of the batter, covered it for a minute or so, then ever so carefully, she flipped it like a regular pancake. The apples would caramelize, then she would turn it out onto a warm plate and sprinkle it with white sugar. Sometimes, I make these for my brother for his birthday. He always cries and tells me how much they are like grandma's. Grandma didn't leave a recipe, she always trusted that I was paying attention while she threw a cup of this and a pinch if that into the bowl. I'm glad I was paying attention. Thank you again for sharing this recipe, it's made my day.

Love your story, Trish. Thanks for sharing!

This is so yummy. I was looking for something to snack on and discovered your site. Thank you so much for sharing your recipes. Keep them coming.. I plan on trying a few others also the biscuits, the cucumber salad, toasted almond crisp cookies and some others.. all sound so good and makes me want to make them. Your pictures do the trick, like you can pluck them out of the picture & eat it!. Thank you...

I had never heard of Apple German Pancake, but I will have to try this recipe.

I just made this! it was delish! thanks!

So glad to hear you enjoyed it, Melissa! I'm thinking it's about time to make another one here.