So I have a confession to make — I’ve been holding out on you. I actually developed this amazing (seriously, AH-MAZING) pizza dip recipe for Walmart back in September. So yes, that means I’ve been hoarding it for 5+ months now… 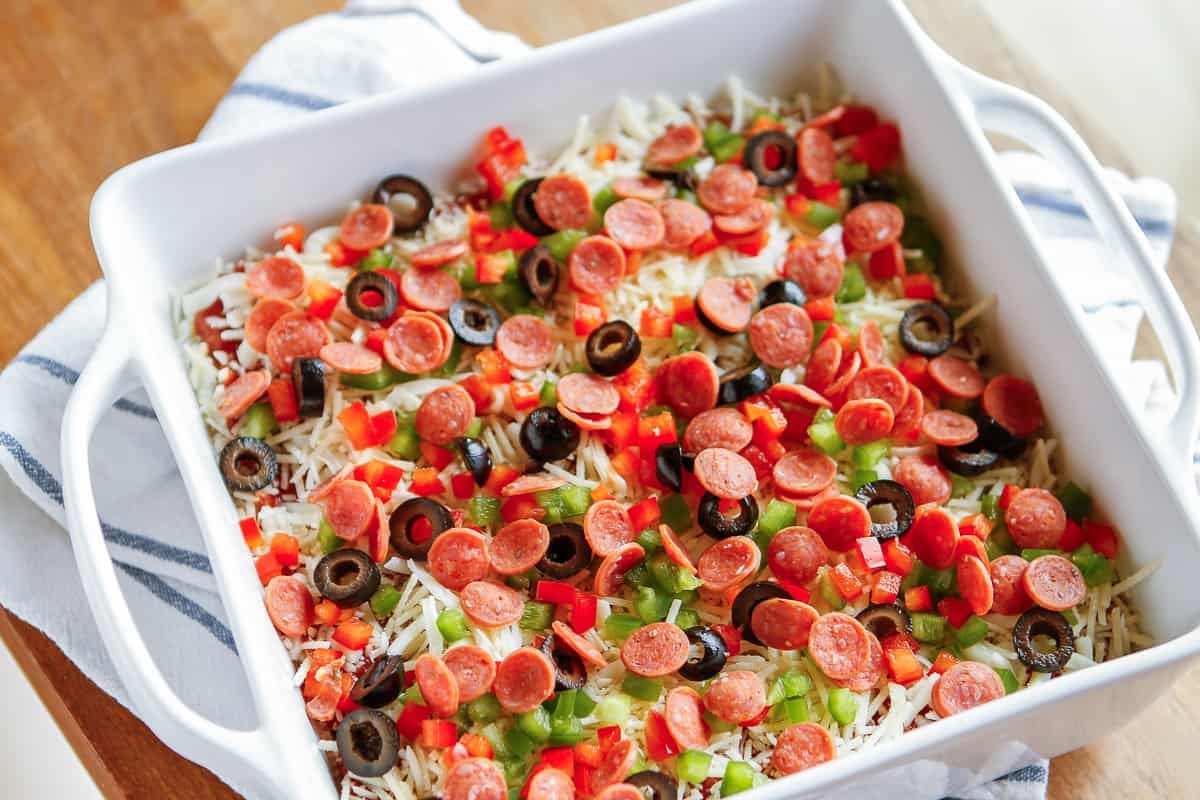 Actually, I had every intention of sharing it with you back in the fall, but then Walmart decided to use it as the star of their Game Time MVP campaign. And it got like a gazillion-plus-one pins and repins on Pinterest — that all led to my pizza dip recipe posted on Walmart.com, which only gives passing credit to my site in a tiny link buried at the bottom of the page. So I was feeling a little sad and slighted that my little corner of the Internet didn’t really benefit from all of the media attention and resulting traffic.

But then I made this dip again last weekend when we invited some friends over to play Cards Against Humanity (tangent: have you played this yet? OMG!!!), and it received rave reviews! I’d honestly forgotten just how freakin’ good it is…

So with Super Bowl 50 coming up on Sunday (and because I started to feel a bit guilty for leaving my dear readers out of the loop on such a fabulous dip recipe), I decided that enough time had passed and it was time to share. 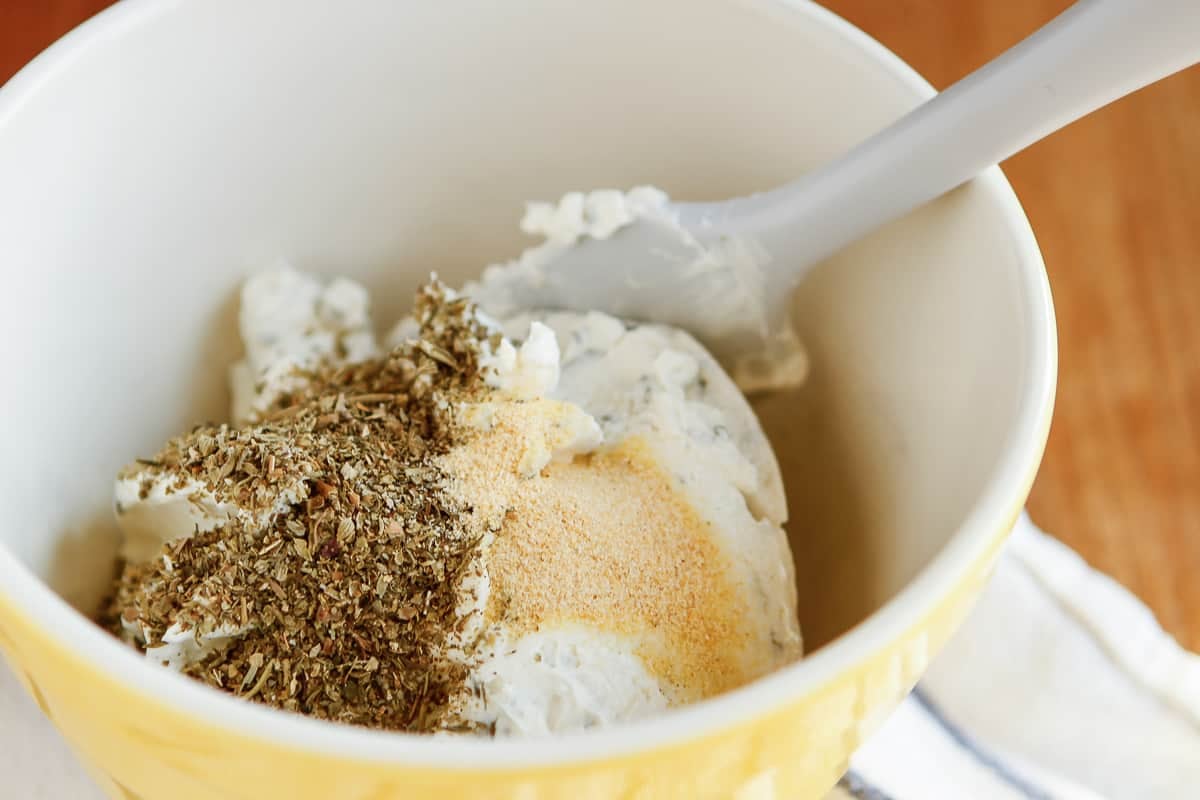 As with so many other of my favorite dip recipes (see this 3-ingredient chip dip & jalapeno popper dip), this pizza dip begins with my fave dip starter — a container of chive & onion cream cheese. It provides an extra dose of flavor that’s perfect in any savory dip recipe that calls for cream cheese. 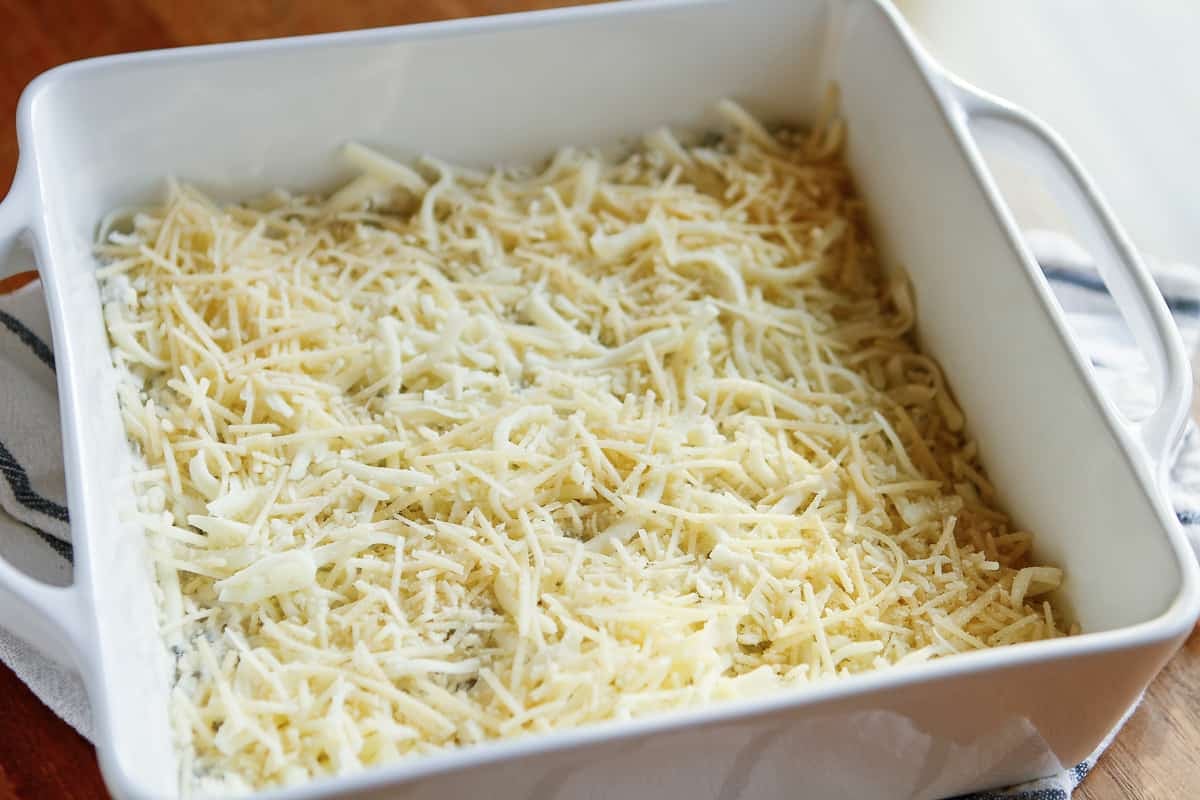 To the chive & onion cream cheese, we’re going to mix in some Italian seasoning and garlic powder. Then we’ll spread the mixture in the bottom of a 8″x8″ baking dish, and top it off with a mixture of mozzarella and shredded Parmesan cheese. 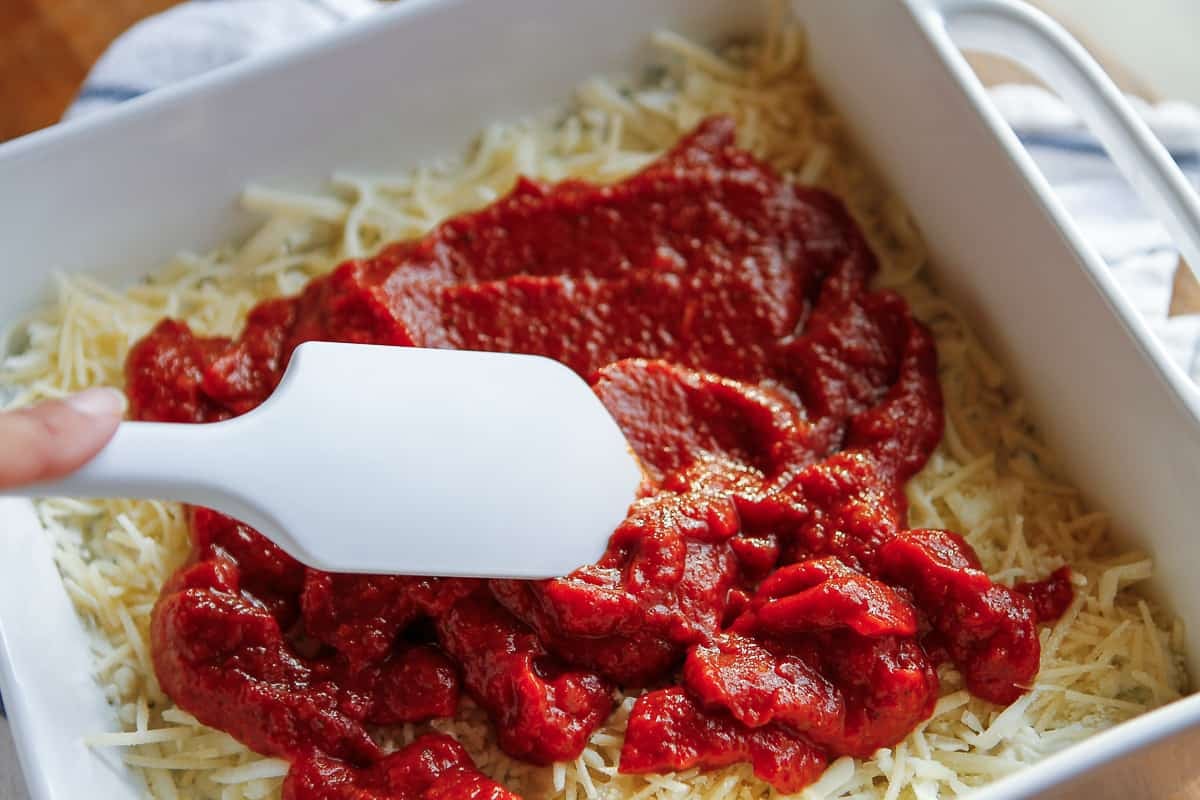 Next we’re going to spread a layer of your favorite pizza sauce over the cheese. I’m planning to share my homemade pizza sauce recipe soon, but store bought works just fine. If I’m buying pizza sauce, I always go with Muir Glen organic pizza sauce — it’s the best of any pizza sauce I’ve tried, hands down.

Finally, we’ll add another layer of mozzarella and shredded Parmesan cheese. Then we’ll finish it off with your favorite pizza toppings!

I turned it into a pizza supreme dip of sorts by adding mini pepperonis, diced red and green bell peppers, and black olives. You could also add sausage, banana peppers, green olives, onion — whatever you like!

Tip: Don’t like greasy pepperoni? Toss the uncooked pepperonis in boiling water for 2 minutes, then remove and pat dry to easily remove the excess grease. 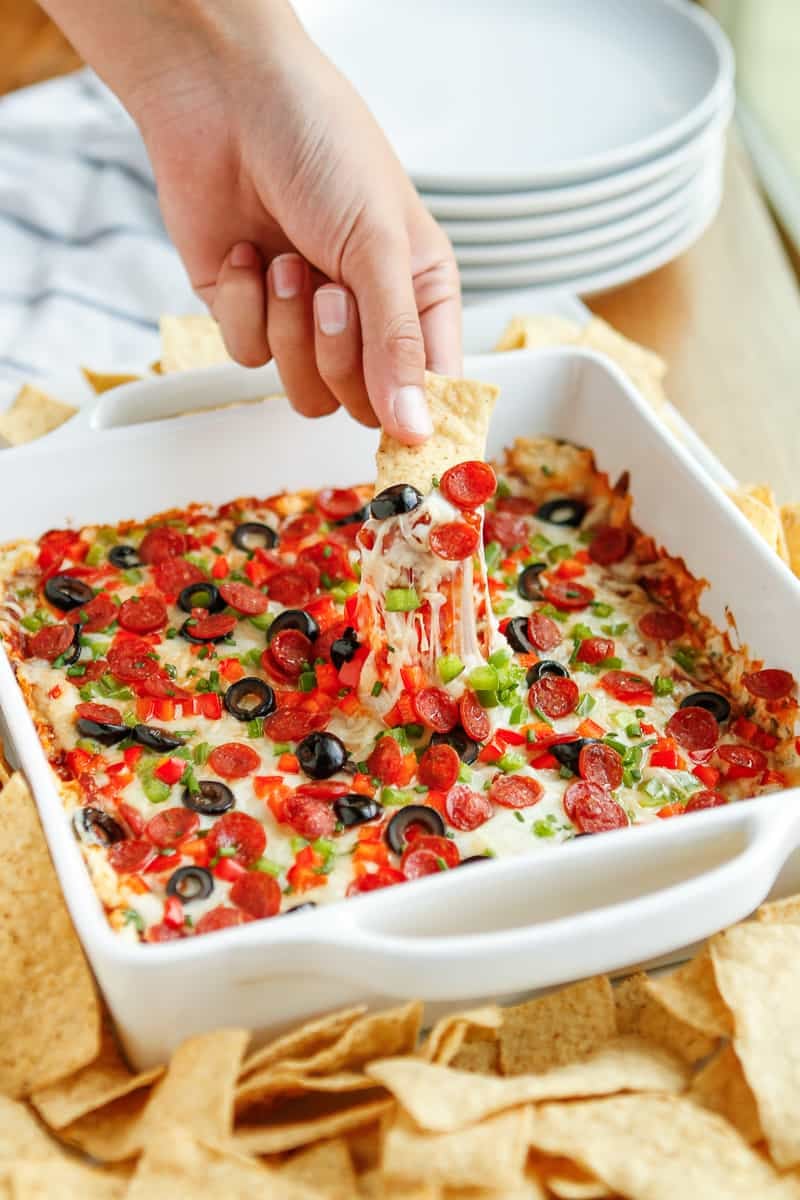 Enjoy this pizza dip served hot from the oven — although I doubt you’ll have to worry about it getting cold. This is one dip that’s not going to sit around! If you know you’re going to be hosting a hungry crowd, I’d recommend doubling it and baking it in a 9″x12″ baking dish.

I would also note that it’s a thick and hearty dip, best served with sturdy tortilla chips and/or pita chips. Enjoy! 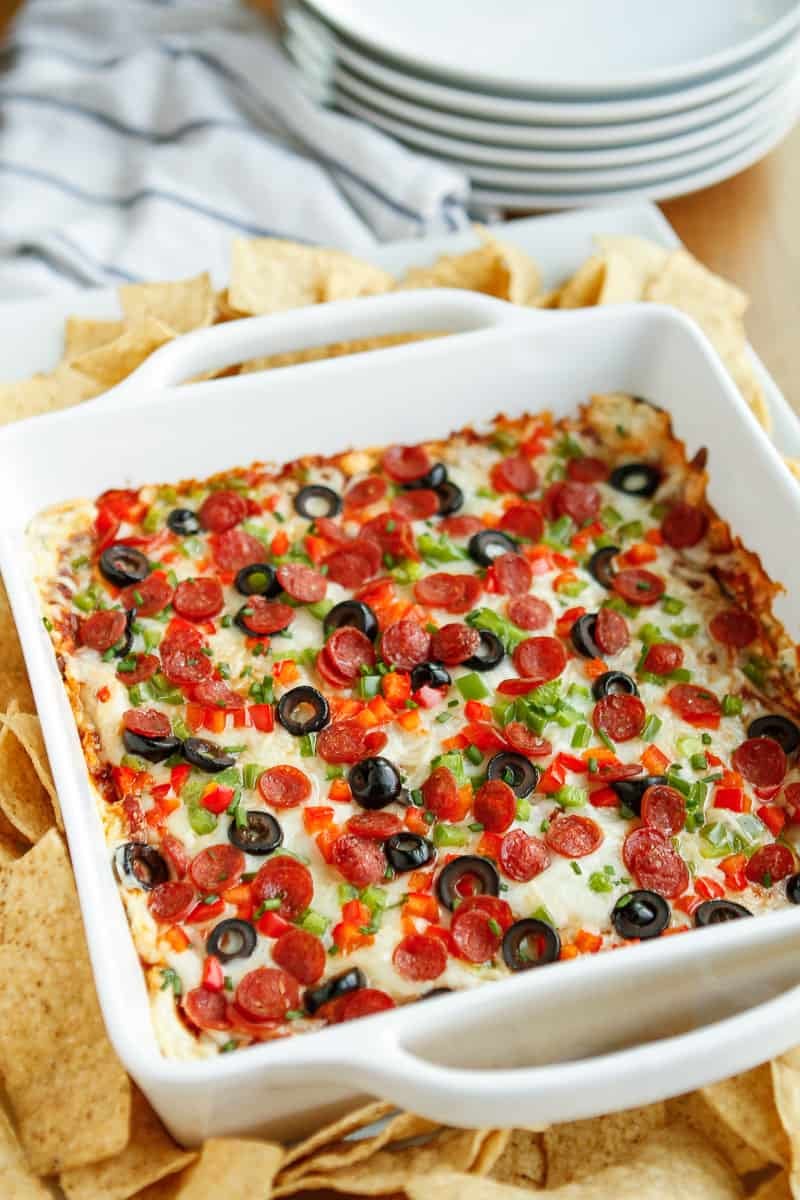