These cool and creamy pumpkin pie pudding shots are dreamy little cups of pumpkin spice alcohol-infused pudding that are totally perfect for any fall gathering! And beyond for all my pumpkin spice-loving friends… 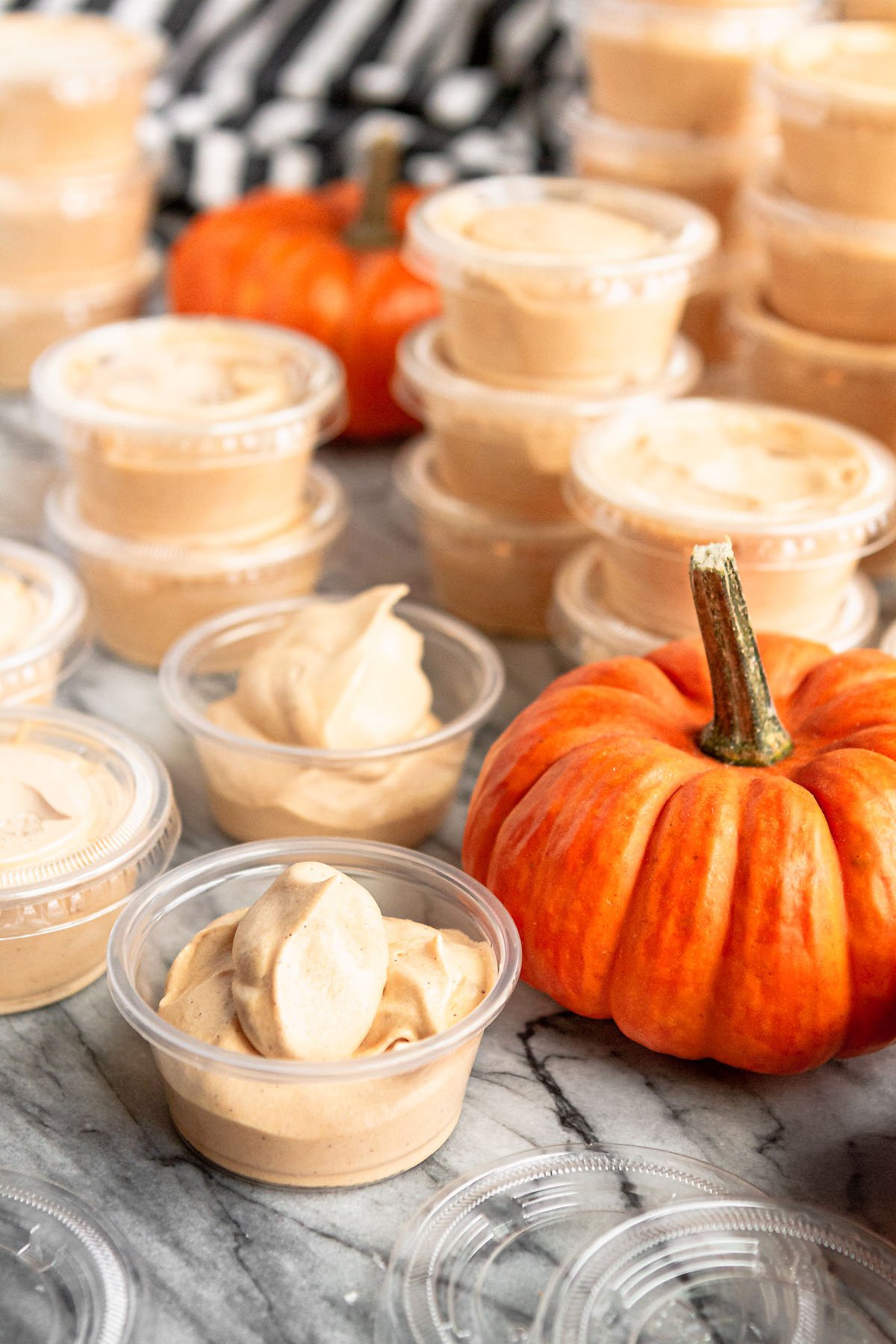 Oops, I did it again… (I can’t even type that without singing it in my head, LOL.) But yes, I totally did it again. Honestly, I had NO intention on sharing any more pudding shots recipes this year — especially not this pumpkin pie shot!

But then I stumbled across the limited edition Bailey’s Pumpkin Spice Liqueur at the grocery store — and well, the wheels started turning. I just couldn’t help myself! With a bottle in my cart, I headed for the baking aisle in search of some Jell-O pumpkin spice pudding. And the rest is pumpkin pie pudding shots history!

Which, if you ask me, is the most delicious kind of history… 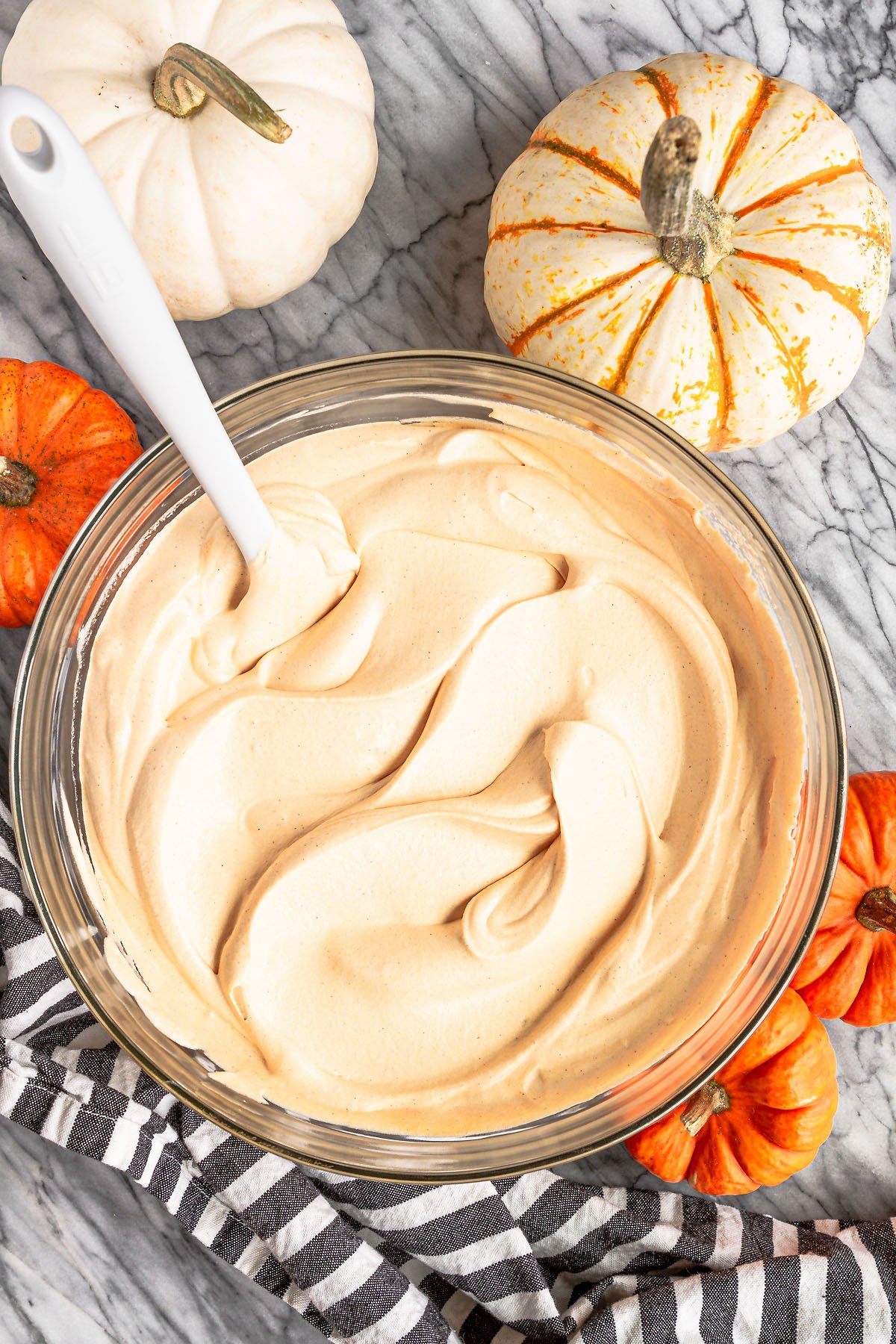 If you’re new ’round here (or maybe just missed my other pudding shot recipes), let me back up for a moment and clarify the whole pudding shots phenomenon…

It started with these chocolate pudding shots back in June. And after they soared in popularity, I offered up these RumChata pudding shots, which also are a smash hit. So pumpkin pudding shots seemed like a natural addition for the fall season. Right? Riiggghhhttt.

As you might have already gleaned, these are all alcoholic pudding shots and, therefore, are an adults-only treat. My basic pudding shot recipe combines Jell-O instant pudding with a creamy liqueur, flavored vodka, milk, and Cool Whip whipped topping. The magic is in the endless flavor combinations you can choose for each ingredient.

Mix your choices all together, portion the mix out into little condiment cups with lids, and pop them in the freezer. They’re seriously ever so much better than Jell-O shots and are ALWAYS the hit of the party! 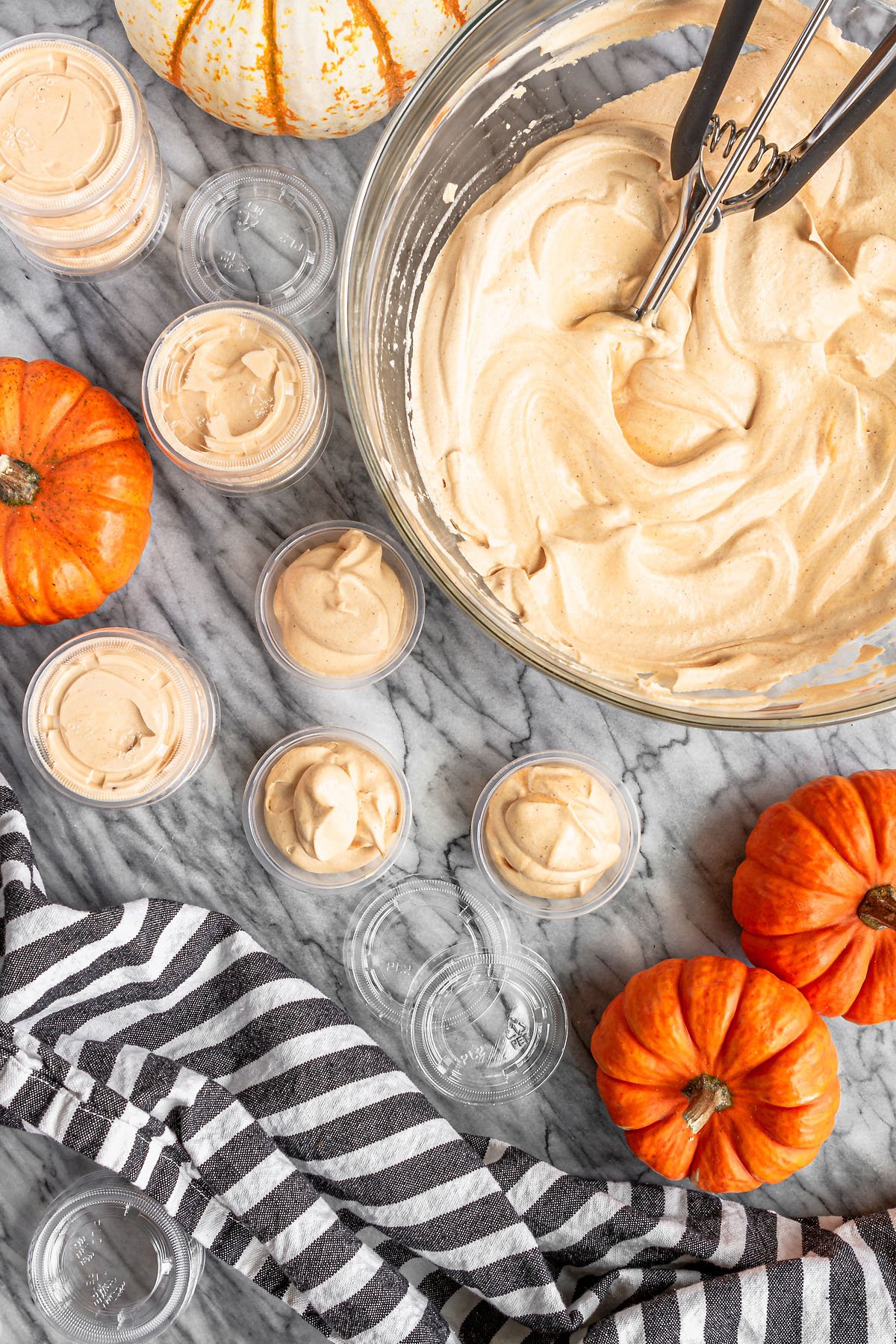 So what flavor combo did I choose for these pumpkin spice pudding shots??? Read on for my recommendations:

Bailey’s Pumpkin Spice Liqueur — Bailey’s calls this a “delicious combination of pumpkin, cinnamon, baking spices & hints of vanilla & coffee.” I call it freaking amazing! Besides being totally perfect for these pumpkin liqueur pudding shots, it also makes the very best homemade pumpkin spice lattes. This is a limited edition seasonal flavor, so stock up now while it’s available. Oh, and the bottle is absolutely gorgeous!

Pinnacle Whipped Vodka — I would never eat pumpkin pie without whipped cream, so this delicate, lightly sweetened, creamy vanilla vodka seems like the ideal choice to use in these pumpkin pie pudding shots with vodka. The bottle mentions that it’s also great in hot chocolate, so you can bet I’m going to try that ASAP!

Jell-O Pumpkin Spice Instant Pudding — Finding this limited edition flavor can be a bit hit or miss in grocery stores. Luckily Amazon has plenty of availability, so you can purchase an ample amount to make Jell-O pumpkin pudding shots all through the fall season and beyond!

Beyond these three ingredients, you’ll need some milk and a 16-oz. tub of Cool Whip. And while we’re on the topic of Cool Whip, don’t try making pumpkin pudding shots with real whipped cream. I get it — I’d rather use it, too. But it’s just not stable enough. 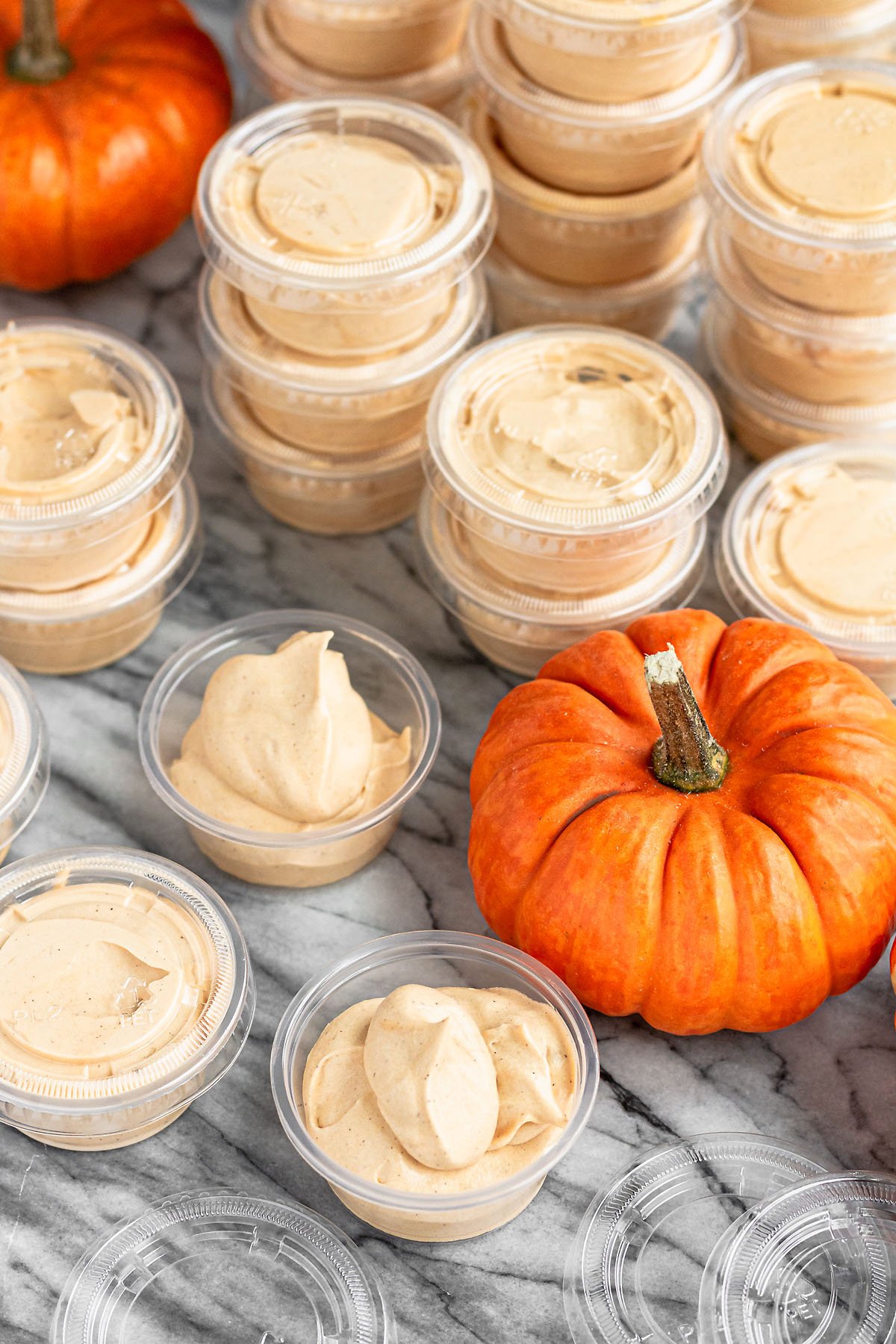 After having made all kinds of pudding shots, I can tell you the key for how to make pumpkin pudding shots that are creamy and fluffy is in the folding. If you just try to whisk everything together, you’ll end up with a soupy mess. I mean, it will still be totally delicious once frozen, but it won’t have the texture we’re looking for.

My pumpkin pie pudding shots recipe starts with whisking together the Bailey’s, milk, and pudding until there are no lumps. Then stir in the vodka. And now it’s time to fold in the Cool Whip.

Simply use a large spoon (this silicone one is my fave) to transfer all of the Cool Whip into the bowl with the pudding mixture. Use the spoon to scoop under the two mixtures, lift them both together, and turn them over repeatedly just until they’re combined. 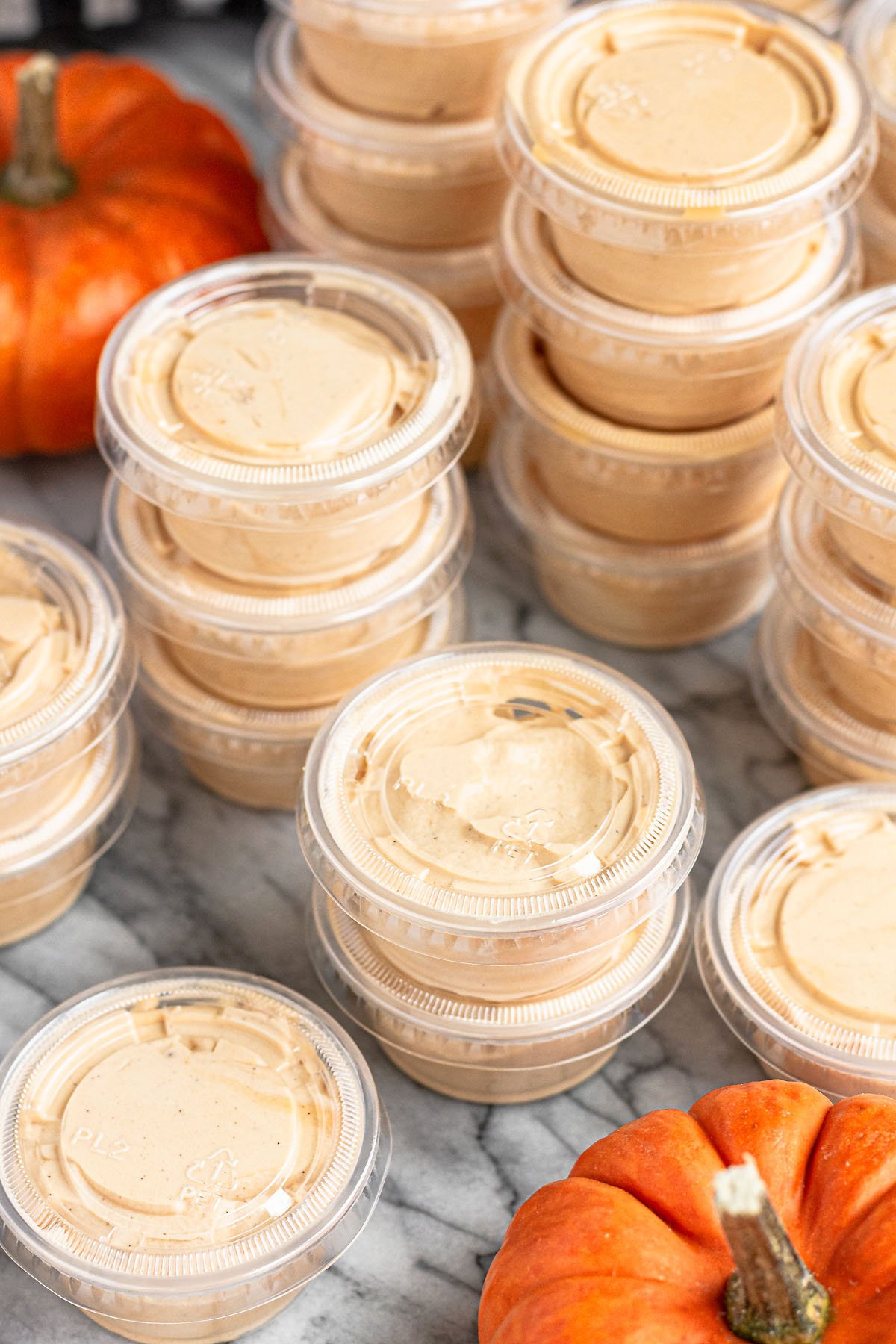 At this point, you’re ready to portion the pumpkin spice Jell-O pudding shots into cups. What kind of cups? Well, I highly recommend these pudding shot cups with lids.

Wondering where to buy pudding shot cups? Most grocery stores carry them with the paper plates and plastic utensils, but they’re actually MUCH cheaper on Amazon. So save some of your hard-earned money and order these.

Also, I can’t recommend picking up one of these medium cookie scoops enough. It’s ideal for scooping the pudding shot mixture into the little pudding shot cups. One big scoop, plus another little dab on top, close up the cups, and you’re ready to pop them in the freezer! 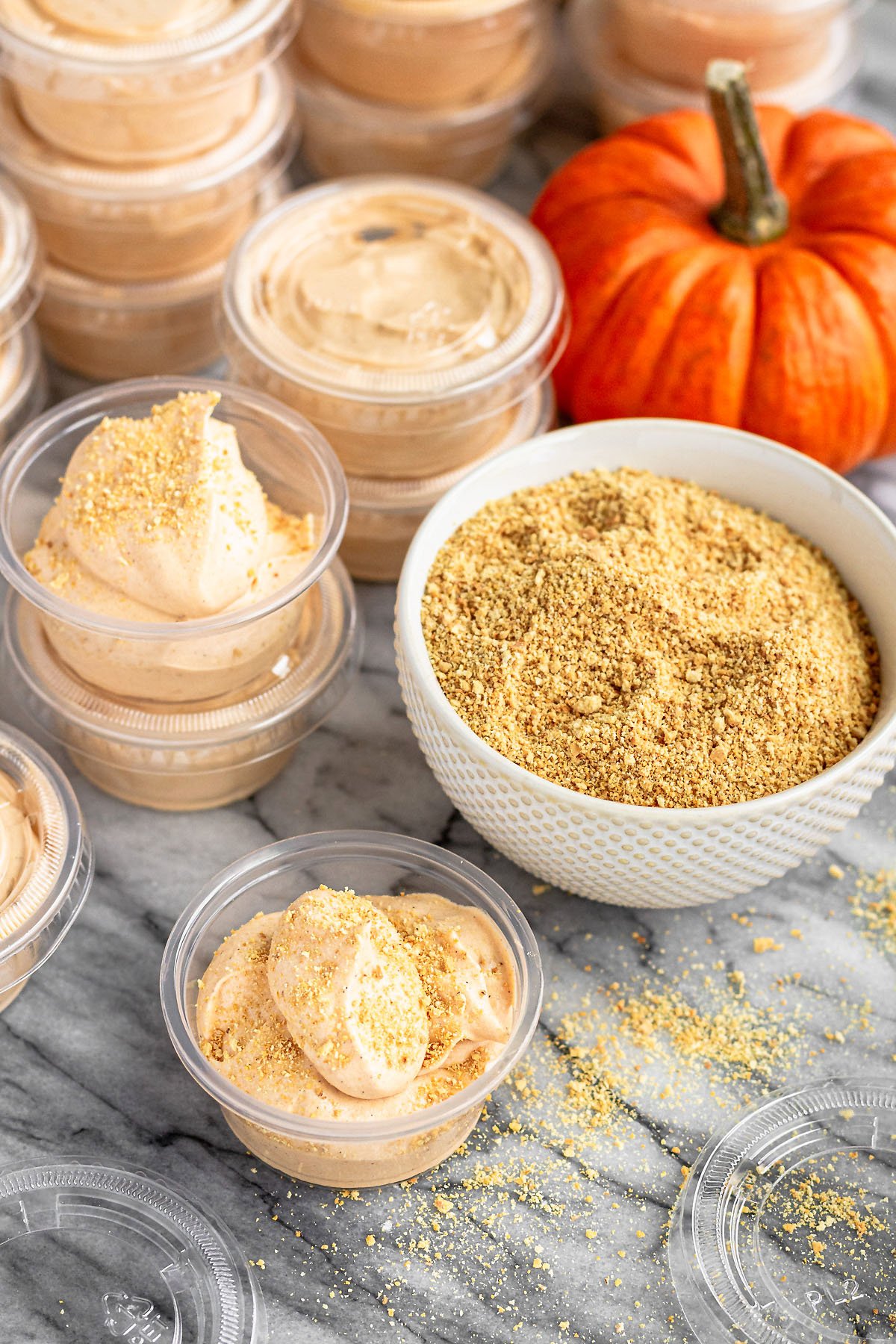 One last thing… I typically prefer my pudding shots to be pretty basic — no frills, no sprinkles, no whipped cream, etc. BUT I did take the liberty of sprinkling some graham cracker crumbs over top of a few of these pumpkin pie vodka pudding shots. And you know what? I’m kinda lovin’ it!

However, I would only do this if I were serving them immediately — like maybe if I was making, say, Halloween pudding shots or Thanksgiving pudding shots… Sounds like a plan to me!

Anyhow, I generally like to freeze my pudding shots and serve them straight from frozen, and the graham cracker crumbs get pretty soggy during this process. So whether or not you add them is totally up to you. ;)

RELATED: White Russian Pudding Shots — for all of you that have been searching up Kahlua pudding shots!

I’d love to see how your pumpkin pie pudding shots turn out… Tag me @Unsophisticook on Instagram or use the hashtag #Unsophisticook so I can check it out. Enjoy!

Not having much luck finding pumpkin spice pudding. :(

Yes, I don't know why it's so hit or miss in stores. Amazon does have it, though!

How long are they good in the freezer for?

Hi Emily -- I'd say they should last for at least 2 months in the freezer!

I can't tell you how much I love these! So fun and tasty!

wow, this shots I bet are yummy and so much fun perfect to bring to a Friendsgiving party too!

These are so fun & festive!