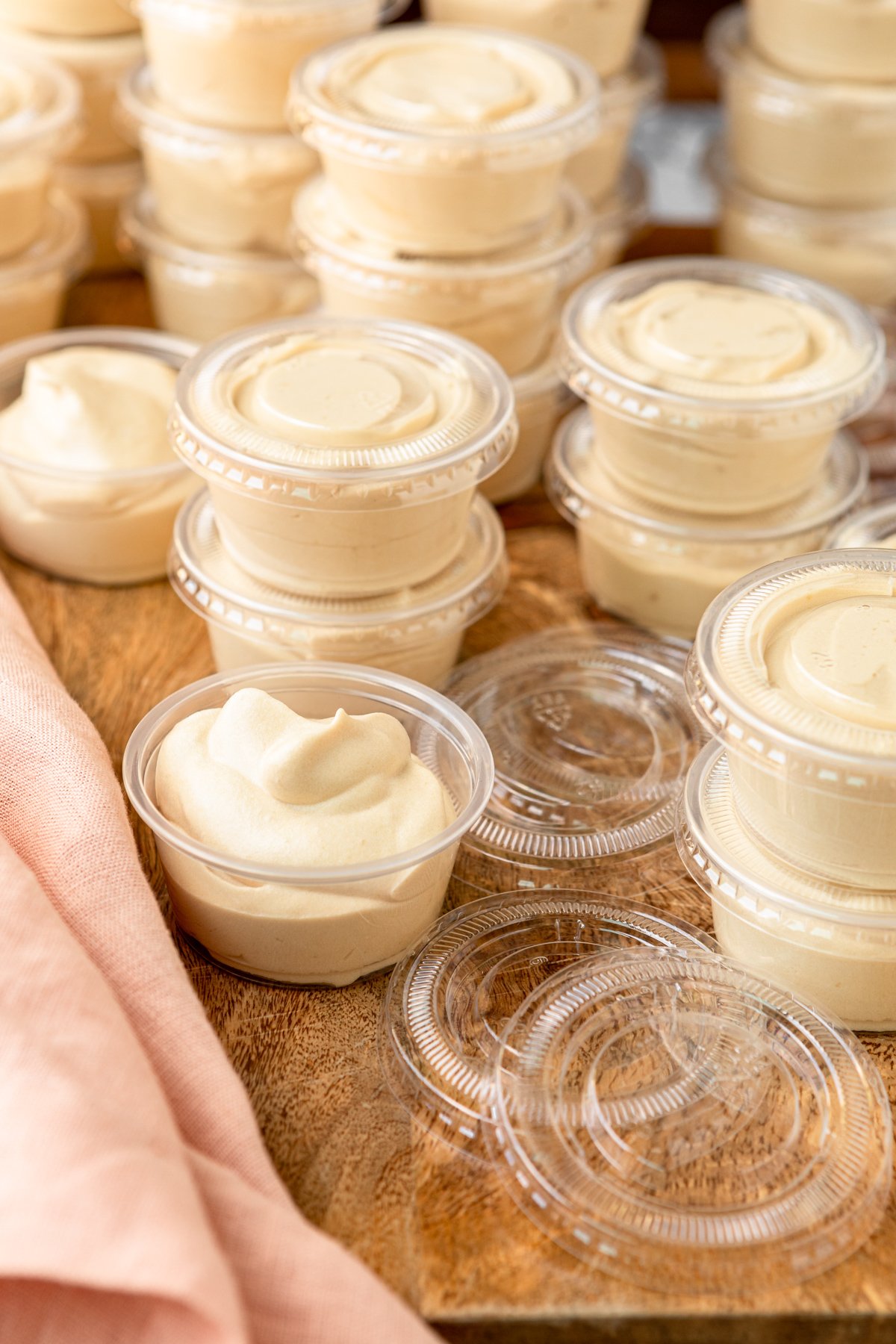 Hey y’all — pudding shots have been on my mind lately… Primarily because you guys are head-over-heels IN LOVE with them right now! I mean it’s summer, it’s hotter than Hades out there, and honestly, what else is there to do right now? But also because I’ve just been wanting to try something different.

OMG, you guys are going to ADORE these… I’ve wrapped up all of the flavors you love in a traditional white Russian in a cool and creamy frozen pudding shot treat with a hint of vanilla.

Which reminds me of something kind of bizarre that I noticed when researching white Russian pudding shots and white Russian cocktails while developing this recipe. Almost all of the recipes included chocolate and/or didn’t have a drop of Kahlua in them. Huh?! A classic white Russian is simply Kahlua, vodka, and a splash of cream, so I’ve tried to stay as true to that flavor profile as possible here. 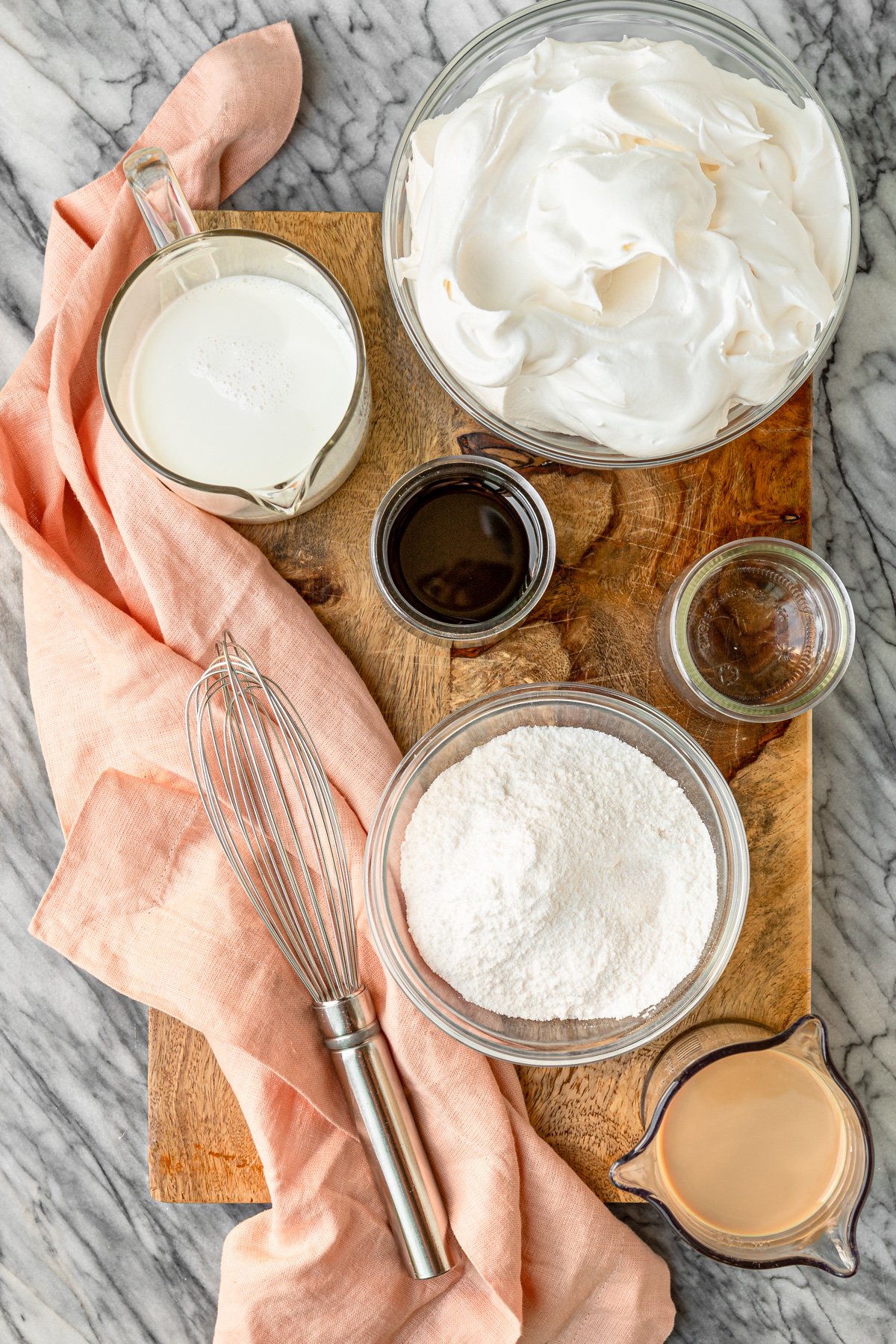 To achieve the flavor I wanted in these white Russian Kahlua pudding shots, I had to stray slightly from the core 5 ingredients I normally use in my pudding shot recipes. Here are the ingredients you’ll want to pick up to make them:

Note: you won’t be able to purchase the Kahlua or vodka at a regular grocery store, so I highly recommend hitting one that houses a state liquor agency inside. That way you can grab everything in one trip! 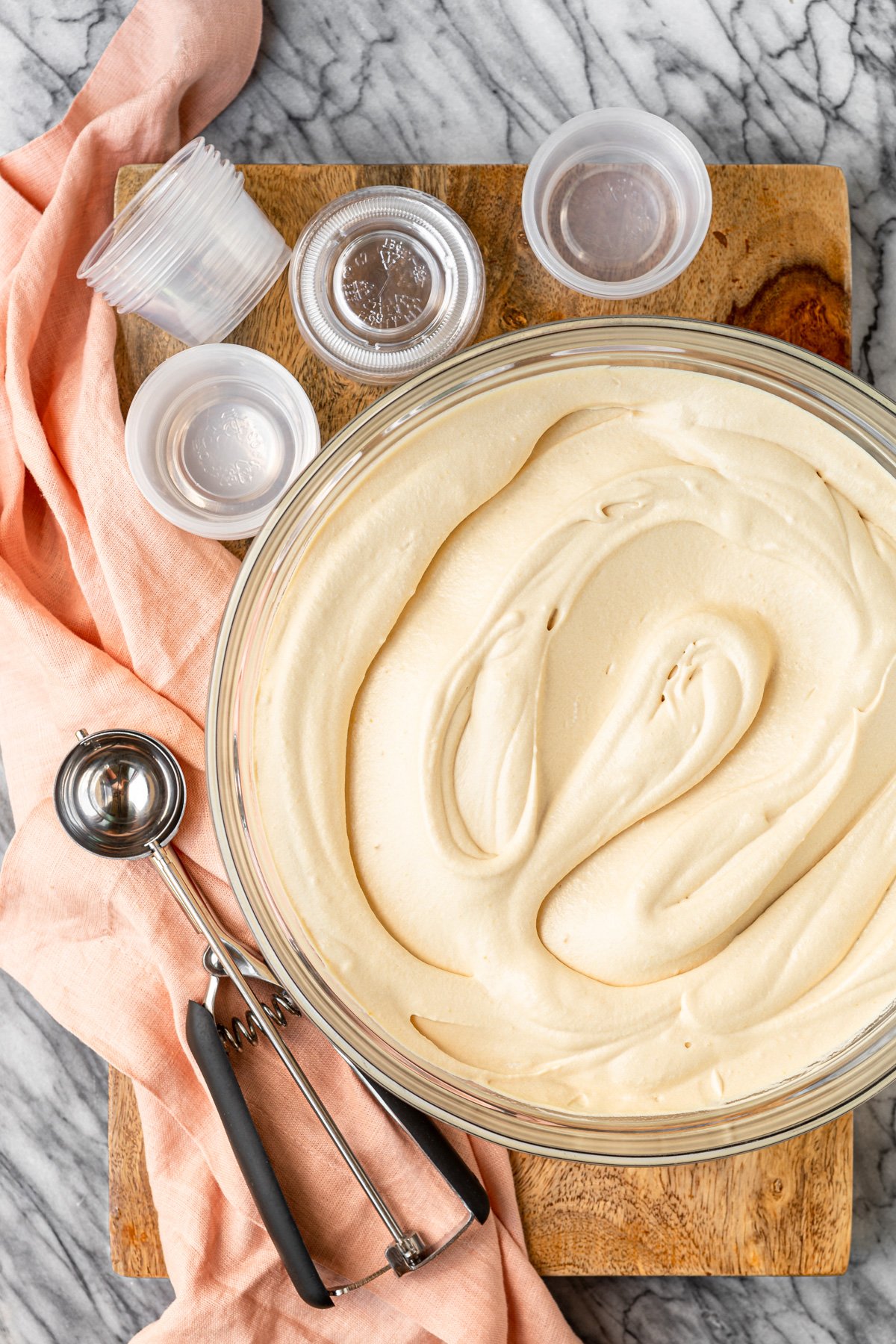 Where To Buy Pudding Shot Cups

Well, except the pudding shot cups… I mean, you CAN buy them at the grocery store (check with the paper plates and plastic utensils), but they’re seriously SO much cheaper on Amazon.

These are the 100-ct. pudding shot cups with lids that I always order. Their 2-oz. size is the perfect serving, and they usually come within a day or two if you have Amazon Prime. So it really pays to plan ahead just slightly if you know you’re going to be making them for an upcoming gathering!

Oh, and BTW, while you’re placing an order for the cups, pick up a medium cookie scoop, too. You will totally thank me when you see how much easier it makes transferring the pudding shot mixture into the cups. Not to mention, it’s also my favorite size to use with pretty much all of my cookie recipes. 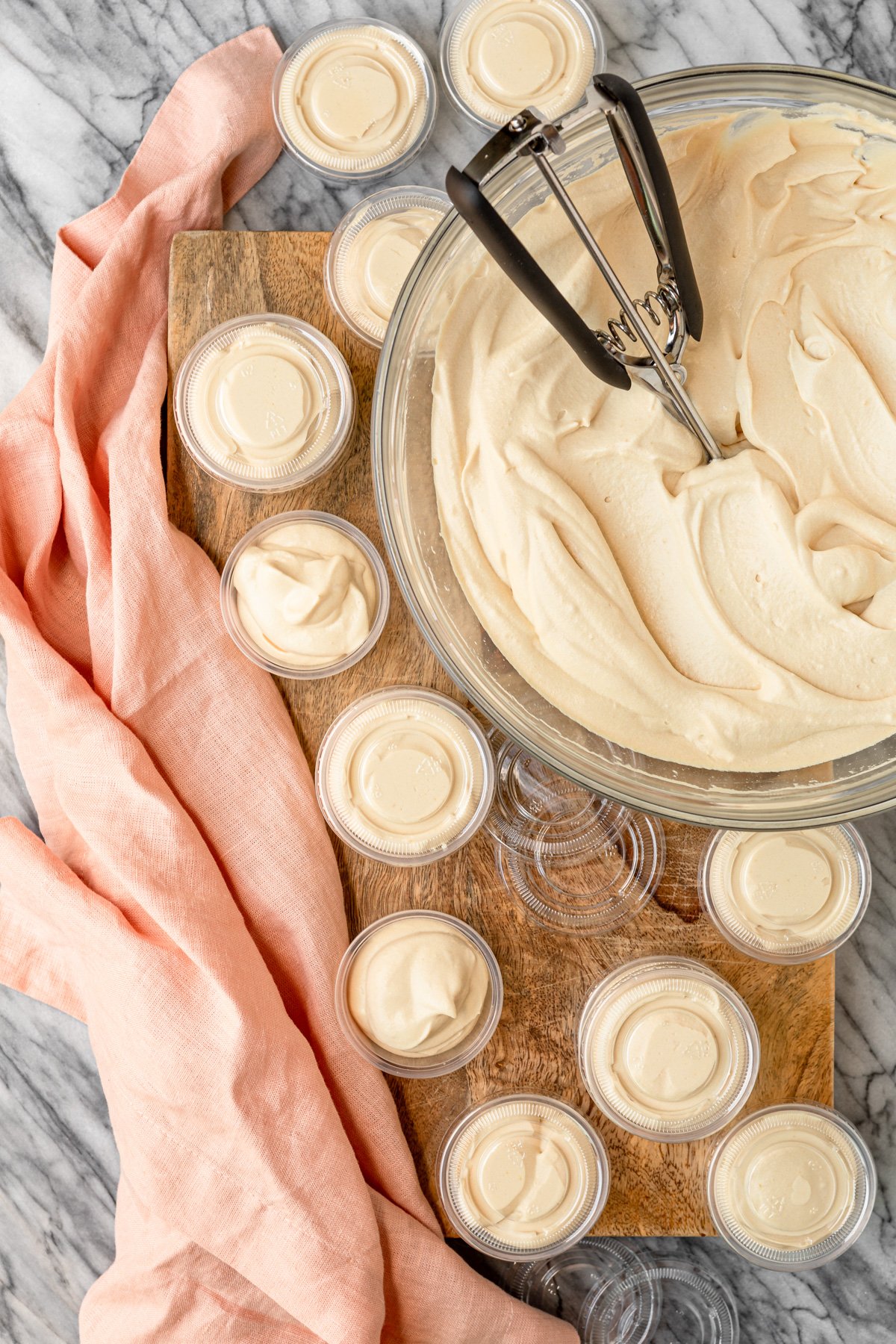 How To Make Pudding Shots With Kahlua

How do you make these yummy pudding shots with Kahlua? It really could not be any easier. Simply whisk the milk and Bailey’s into the vanilla instant pudding until there are no lumps. After they’re thoroughly mixed, whisk in the Kahlua and vodka. Finally, fold in the Cool Whip until completely combined.

All that’s left to do is divide the mixture among the pudding shot cups! Again, I recommend using a medium cookie scoop for this. I’ve found that one big scoop, plus a little dab on top, is the ideal amount to fill the cups while still leaving a little room for expansion when freezing them. Close each cup up with the lids, and freeze until you’re ready to serve your pudding shots. 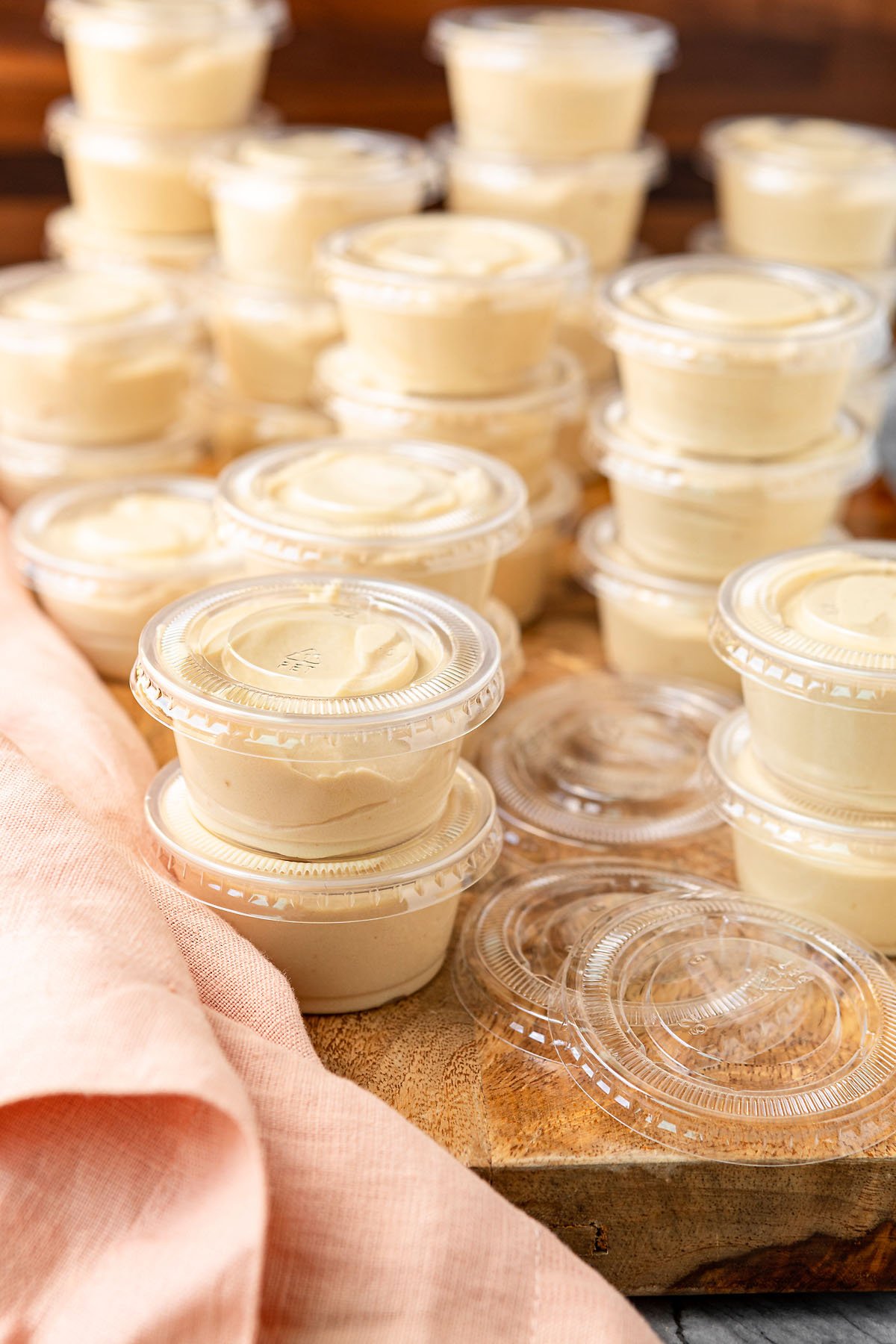 If you so desire, these white Russian pudding shots are ready to serve immediately. However, I prefer the flavor and consistency they take on after freezing them.

Plus, if you’re planning to take them to a party, they travel better frozen. Just throw them in a cooler with some ice — and maybe make a few more than you think you’ll need. They’re always the star of the show!

PIN IT NOW! CLICK HERE TO ADD THIS WHITE RUSSIAN PUDDING SHOTS RECIPE TO YOUR PARTY RECIPES BOARD ON PINTEREST!

If you like this Kahlua pudding shots recipe, I’m certain you’ll also LOVE these other pudding shot recipes:

Can I forgo the Bailey's and double up on the Kahlua?

Hi Cindy -- I have not tried it this way. I'd imagine it should work, but it probably won't taste like a white Russian. I think it will still taste good, though!

Can i use regular vodka witb a dash of vanilla extract?

Yes, if you don't have the vanilla vodka, that should work!

You don’t specify what size package of the pudding.

Hi Christa! If you scroll down to the printable recipe card, the size is listed there. You'll want to pick up 2 of the 3.4-oz. packages of vanilla instant pudding. Enjoy!

what a fun idea! love a good pudding shot

I love a good white Russian so these pudding shots are right up my alley. You make them look so tasty!! Can't wait to try them, thanks for sharing.