These luscious chocolate pudding shots are heavenly little cups of alcohol-infused pudding that are sure to make you the host or hostess with the mostest. They’re a cool and creamy adults-only treat that’s always a hit at summer parties! 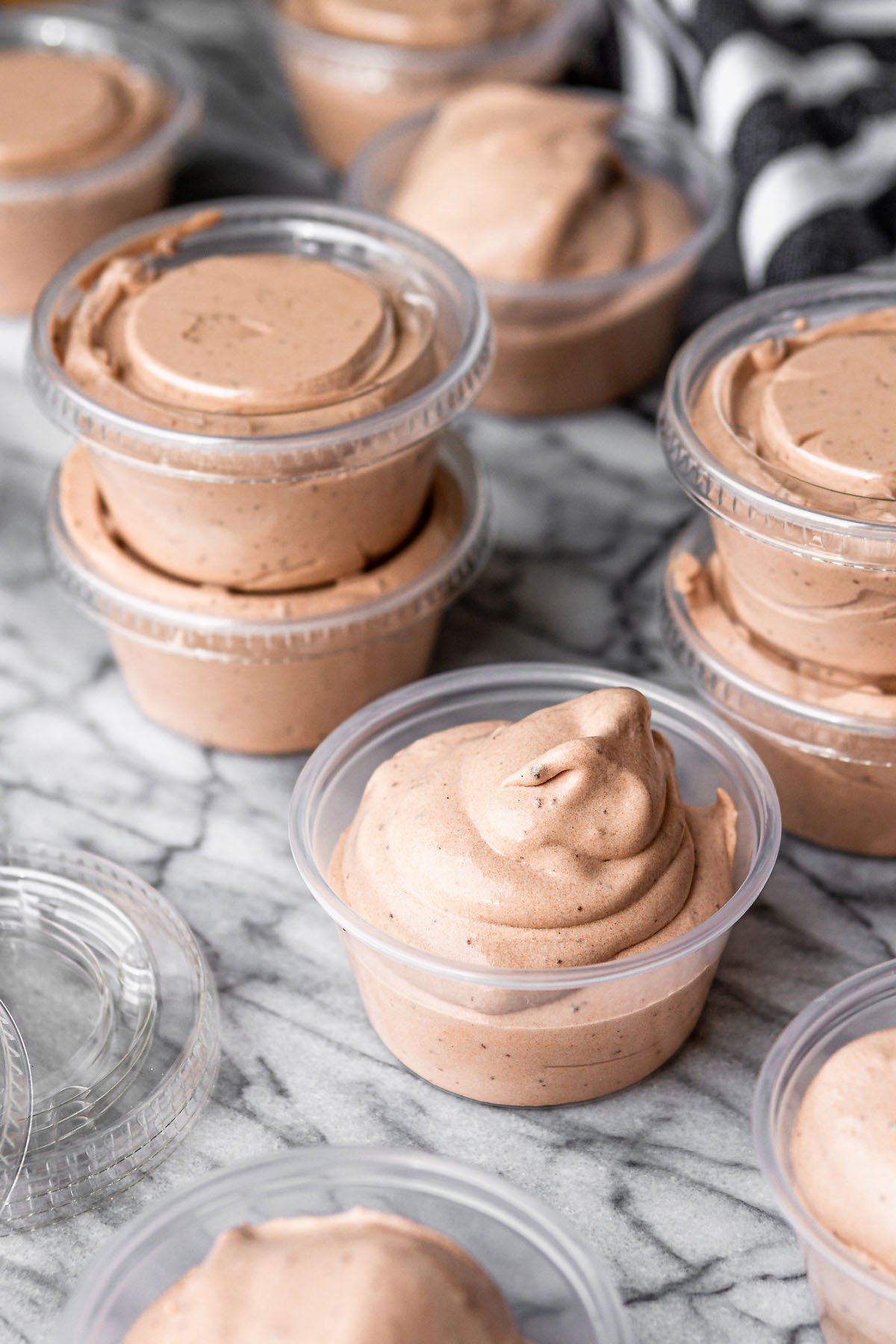 We’ve been pulling these chocolate pudding shots out of our cooler for OBX vacations, football tailgates, pre-concert parking lot parties, and really ANY adult gathering to excited cheers for years. Simply put, they’re guaranteed to put a smile on everyone’s face!

I’ll tell you up front that they go fast — which is why this chocolate pudding shots recipe makes a BIG double batch for a crowd. Because running out of pudding shots too early in the evening is a sad, sad occasion. 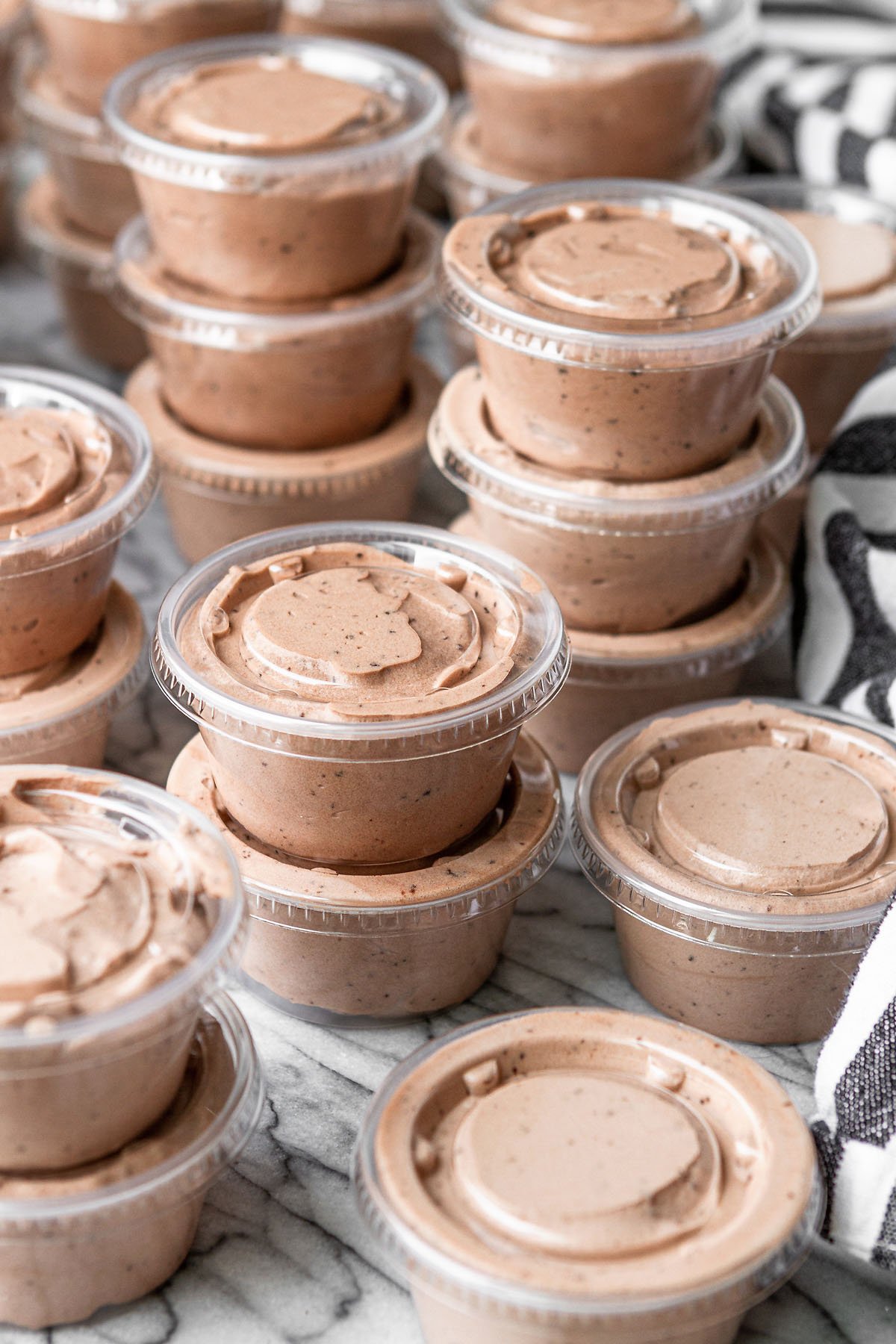 Basically, they’re heavenly little cups of alcohol-infused pudding that will surely make you the host or hostess with the mostest. They’re ideal for summer gatherings, because they’re 1) super easy to make, 2) can be made several days ahead of time, and 3) ALWAYS well received.

These pudding shots are tastier take (in my opinion) on their partner-in-crime, the more well-known Jell-O shot. In case you haven’t noticed, Jell-O shots are everywhere these days. In fact, vendors were actually selling them at the concert we went to last night. Crazy!

But pudding shots? Not so much. And I’m here to remedy the situation. 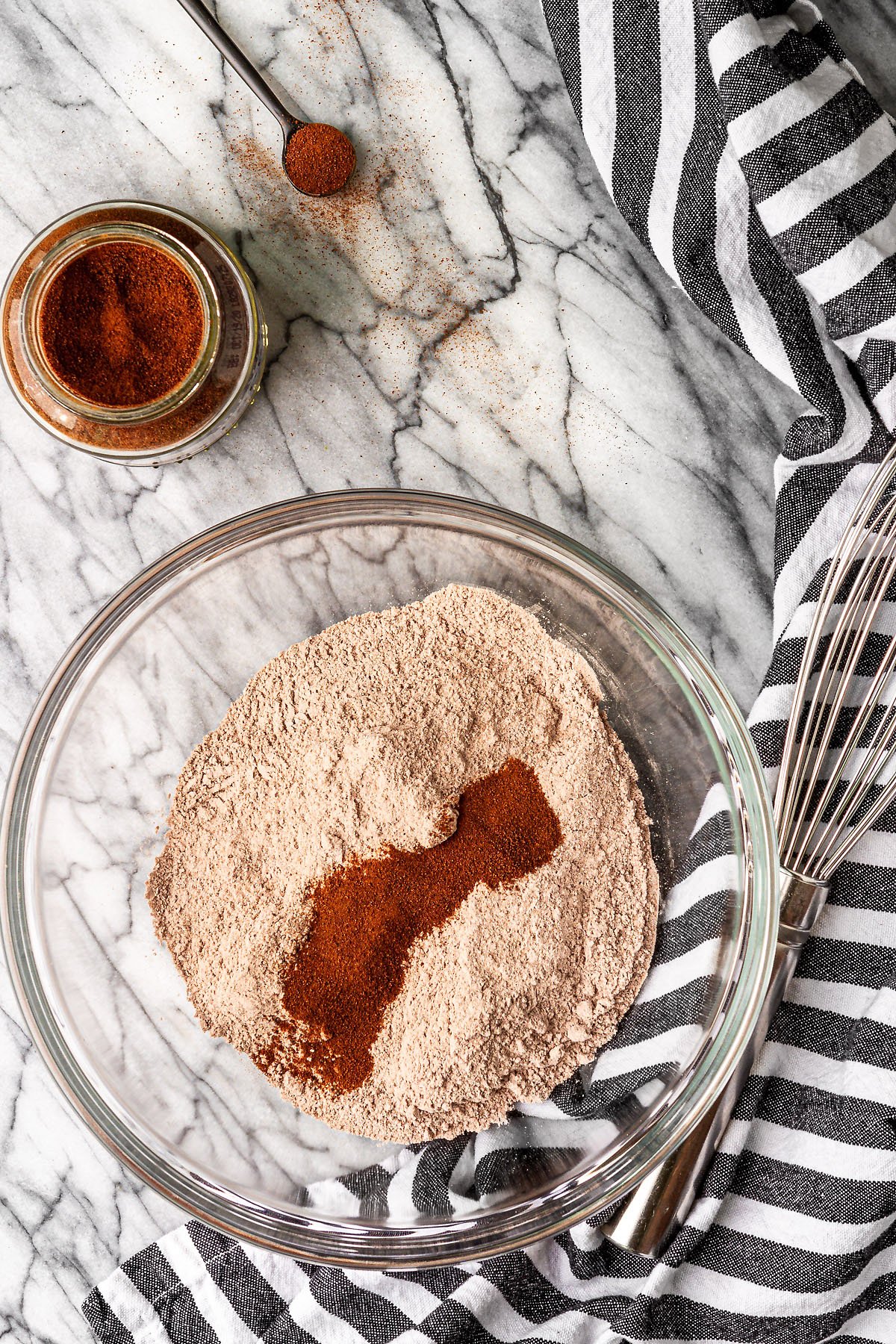 Made with just 5 ingredients, these chocolate pudding shots are totally delicious. AND deceptively strong — thanks to a cup each of Bailey’s Irish Cream and flavored vodka.

The original recipe calls for espresso vodka, which sounds fabulous but is about as common as a unicorn around here. Seriously, I’ve been to multiple stores and have yet to find even one bottle.

No problem, though! I decided to use Pinnacle Whipped Vodka, and then I added a teaspoon of instant espresso powder. It’s totally optional, but espresso powder is known for intensifying the chocolate flavor in recipes, so I really like the subtle flavor boost it provides.

How do you make pudding shots? Well, it’s really quite simple. Whisk the milk and Bailey’s into the instant chocolate pudding and espresso powder (if using). After they’re well mixed, whisk in the vodka. Finally, fold in the Cool Whip until completely combined.

My preferred way to serve these alcoholic pudding shots is in these little condiment/pudding shot cups. Just spoon the mixture evenly into the cups (one big scoop plus a dab using this cookie scoop is ideal), leaving a little room for expansion, because we’re going to pop them in the freezer. Close each cup up with the lids, and freeze until you’re ready to serve your pudding shots.

Fun fact: We ran out of cups at the beach one year, so we just used spoons to eat the mix right out of the bowl. But then we ran out of spoons… So I just used my hand to scrape the bowl clean. Not my finest moment, but these chocolate pudding shots are seriously THAT good! 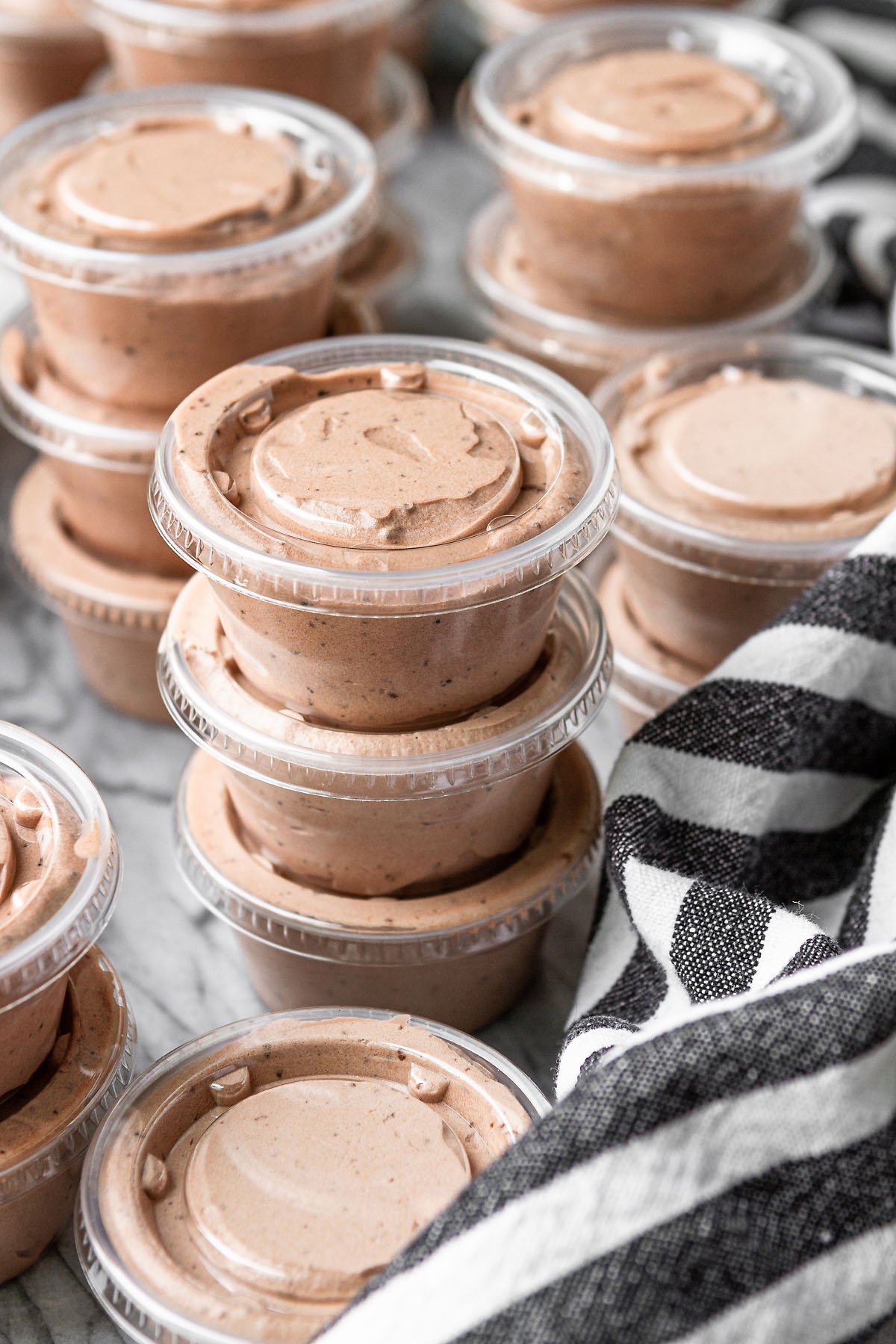 1| I’ve seen some pretty fancy and over the top puddings shots on Pinterest, all claiming to be the best pudding shots ever. Do they taste better than these simple chocolate pudding shots? I’m pretty skeptical… Maybe they do and maybe they don’t.

But when it comes right down to it, I’ve found that my guests really don’t care if their pudding shots are smothered in whipped cream, cookie crumbs, or crushed candy. These basic chocolate pudding shots take just 10 minutes to make, and the results speak for themselves. Their taste is anything but basic!

2| That said, this recipe is easily customizable. Try swapping in different flavors of vodka or different varieties of instant pudding. You can even try different flavors of Cool Whip. We tried the Oreo Cookie Cool Whip in these chocolate pudding shots at the beach last year, and it was totally amazing. Unfortunately, I’ve been unable to find it back here in Ohio.

PIN IT NOW! CLICK HERE TO ADD THIS PUDDING SHOTS RECIPE TO YOUR PARTY RECIPES BOARD ON PINTEREST! 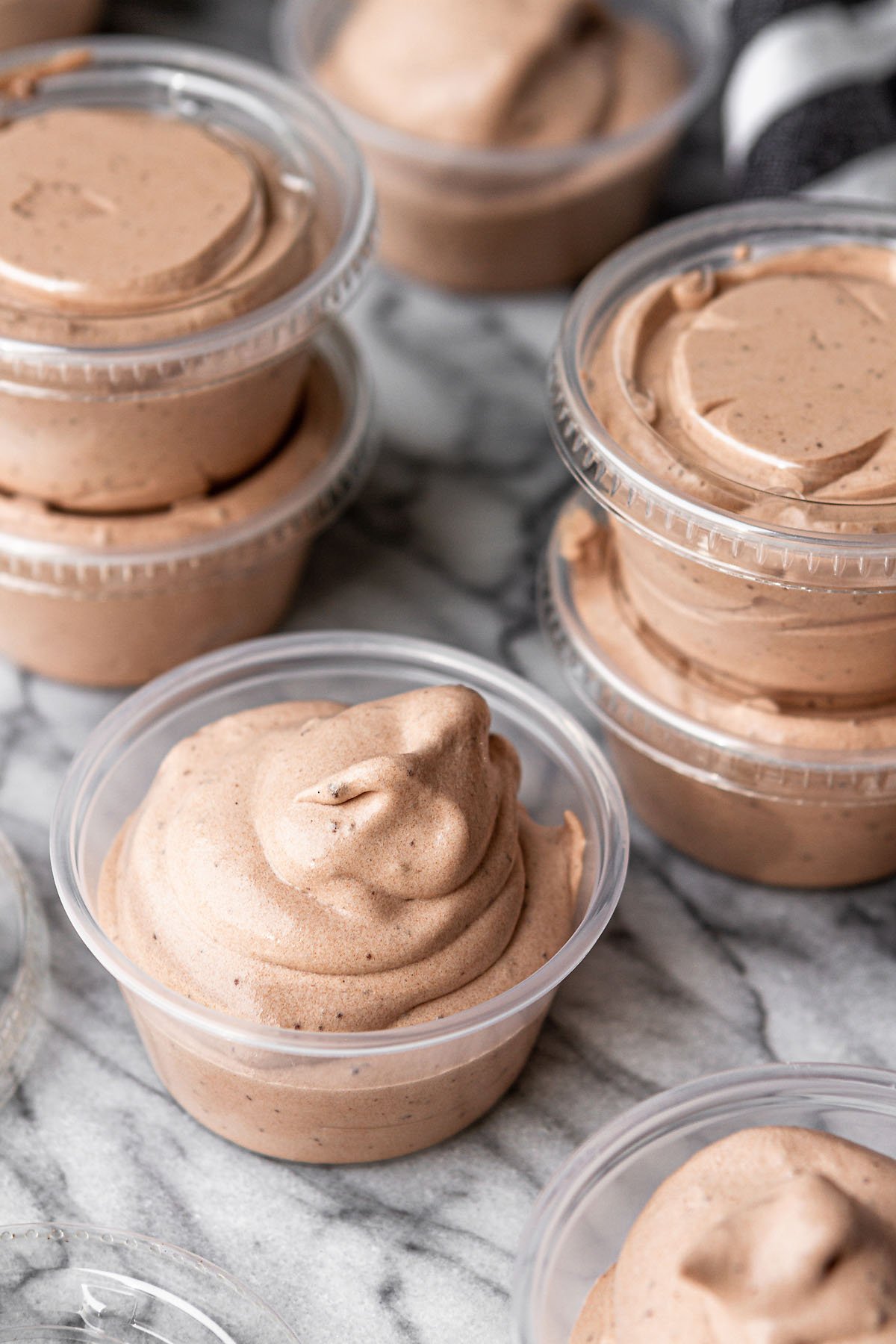 I like to store these alcoholic pudding shots in the freezer until I’m ready to serve them. The high alcohol content will prevent them from freezing solid.

These chocolate pudding shots can be served straight from the freezer (my fave), or you can allow them to thaw in the fridge before serving. When we take them to a party, we throw the still frozen pudding shots into an ice-filled cooler, and they’re good to go for the duration. 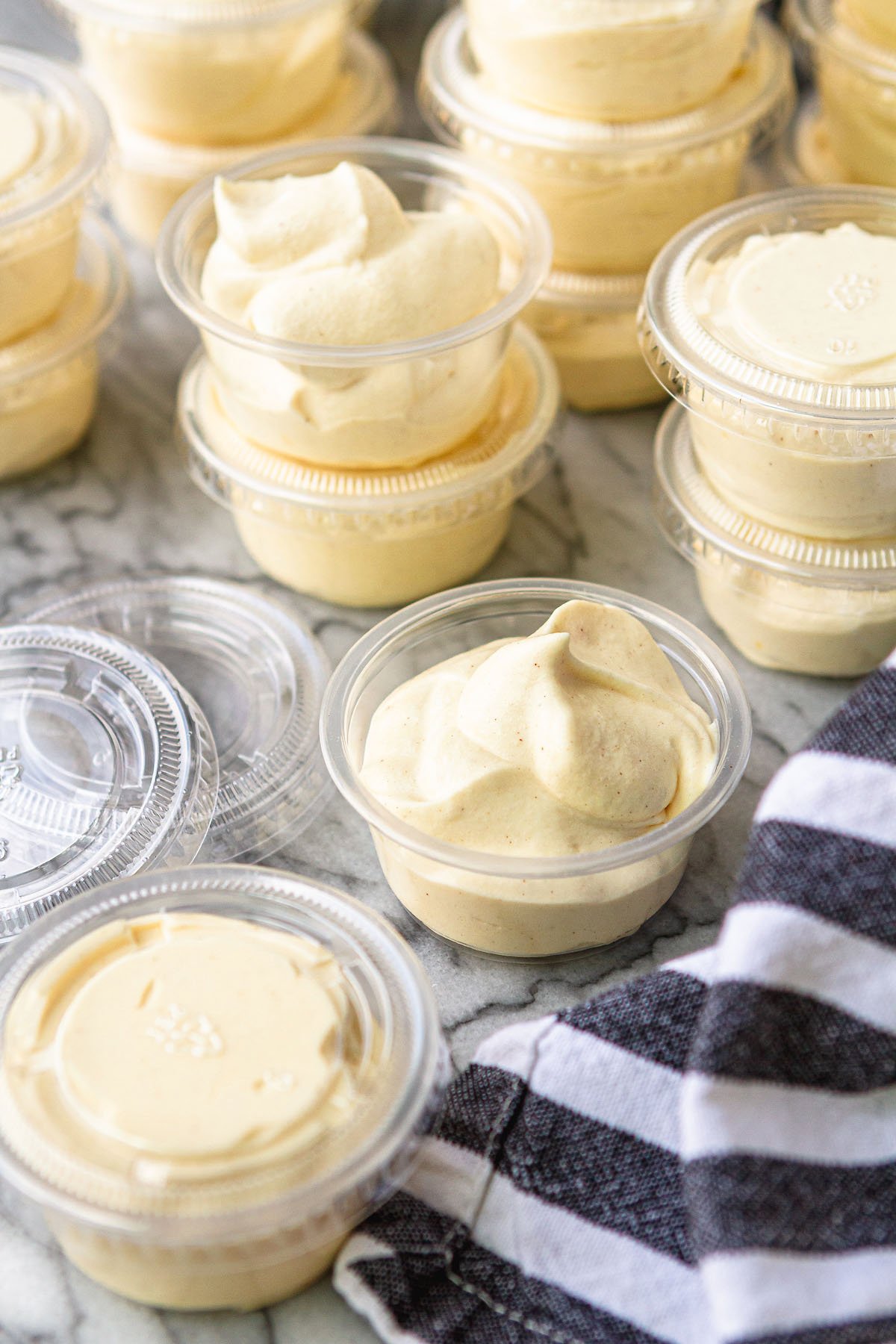 UPDATE: Whoa, you guys blew me away with your response to this chocolate pudding shots recipe… So I made you not one, not two, not even three, but four NEW pudding shot flavors!!!

Try them all ASAP and let me know what you think. Want more flavors? Tell me what sounds delish in the comments.

I made these but I used Screwball peanut butter whisky. OMG they were amazing. A little slice of peanut butter/ chocolate heaven.

@Tara Kuczykowski, has this happened yet? I am looking to make them this weekend with PB whiskey

OMG, too funny -- I just discovered Skrewball about a month ago and have a PB pudding shots version in the works. Stay tuned!! And your version sounds totally delish, too...

Just made eggnog, Cheesecake, and piña colada! These are great.

Happy you love them, too. So fun!

Wow! Yum! If you froze one of those little ice cream sampling spoons in the cup, you could eat it like a pudding pop! OMG-can’t wait for our annual pig roast! One more thing for all our friends to look forward to!!!!

Such a great idea -- you will LOVE them!

I have made these several times and they are always a hit. I make mine very similar but with the cookies and cream pudding. Sooooo good!!

Awesome! I’ve made them with the cookies and cream Cool Whip but not the pudding. Will have to try it soon - thanks for the suggestion!