These dreamy RumChata pudding shots are luscious little cups of cinnamon-y, vanilla-y alcohol-infused pudding that will be the star of your next cookout or tailgate! My go-to frozen vanilla pudding shot recipe…

I’ve gotta hand it to you guys — y’all surprised me! Back in June when I shared my original recipe for chocolate puddings shots, I made a bold statement that summer 2019 was going to be the summer of the pudding shot. AND IT WAS!!!

But what I didn’t predict was that you guys would continue making this boozy pudding treat for your tailgate shindigs right on into fall. Seriously, THOUSANDS of you have been hitting up my site each week — just for these pudding shots.

Forget the boring old jello shots… This boozy dessert pudding recipe is tops. Am I right?!

Since I was already planning to make them for the Luke Bryan Farm Tour concert (good reason, huh?) this Saturday, I figured now would be a good time to create a new classic flavor of pudding shot to complement the chocolate version.

So I present to you these amazing RumChata pudding shots! If you’re a fan of dreamy RumChata liqueur, with its mixture of rum, dairy cream, cinnamon, vanilla, and sugar, you are going to ADORE these creamy cinnamon vanilla pudding shots.

So do you want to learn how to make these RumChata shots??? Of course you do! Because pudding shots with rum is where it’s at… And you can’t beat a good 5-ingredient recipe. 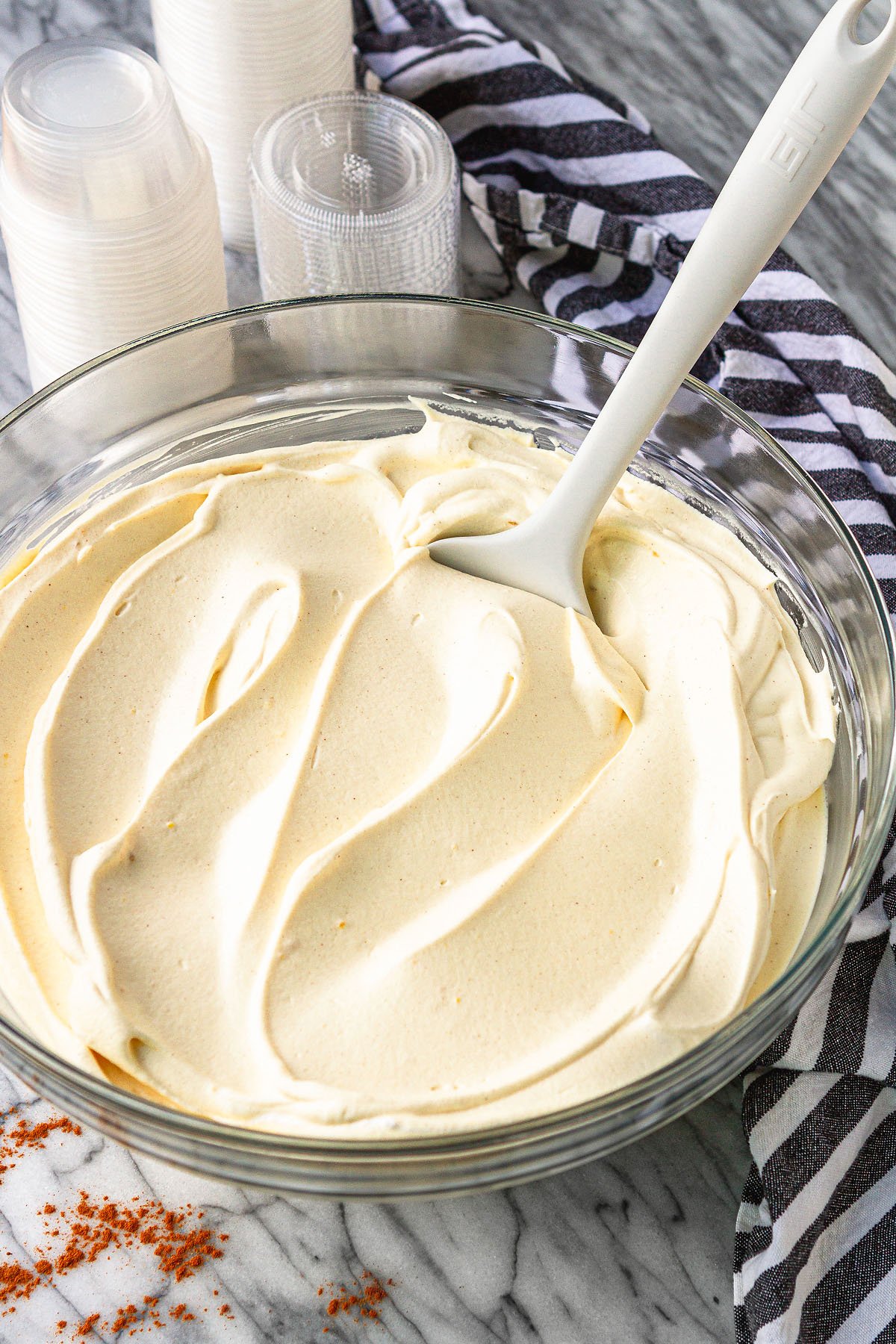 Yep, FIVE — count ’em: 1, 2, 3, 4, 5 — ingredients are all you need to make these yummy Jell-O pudding shots with RumChata. There are a lot of other fancier RumChata pudding shot recipes out there, but you know me — I like to keep my drink recipes simple (but still delicious)!

So head to your local grocery store (preferably one that has a state liquor agency inside) and pick up the following ingredients:

NOTE: If you’re not a fan of the cinnamon-forward rum flavor taste of RumChata, you can substitute an equal amount of Baileys Irish Cream Liqueur. 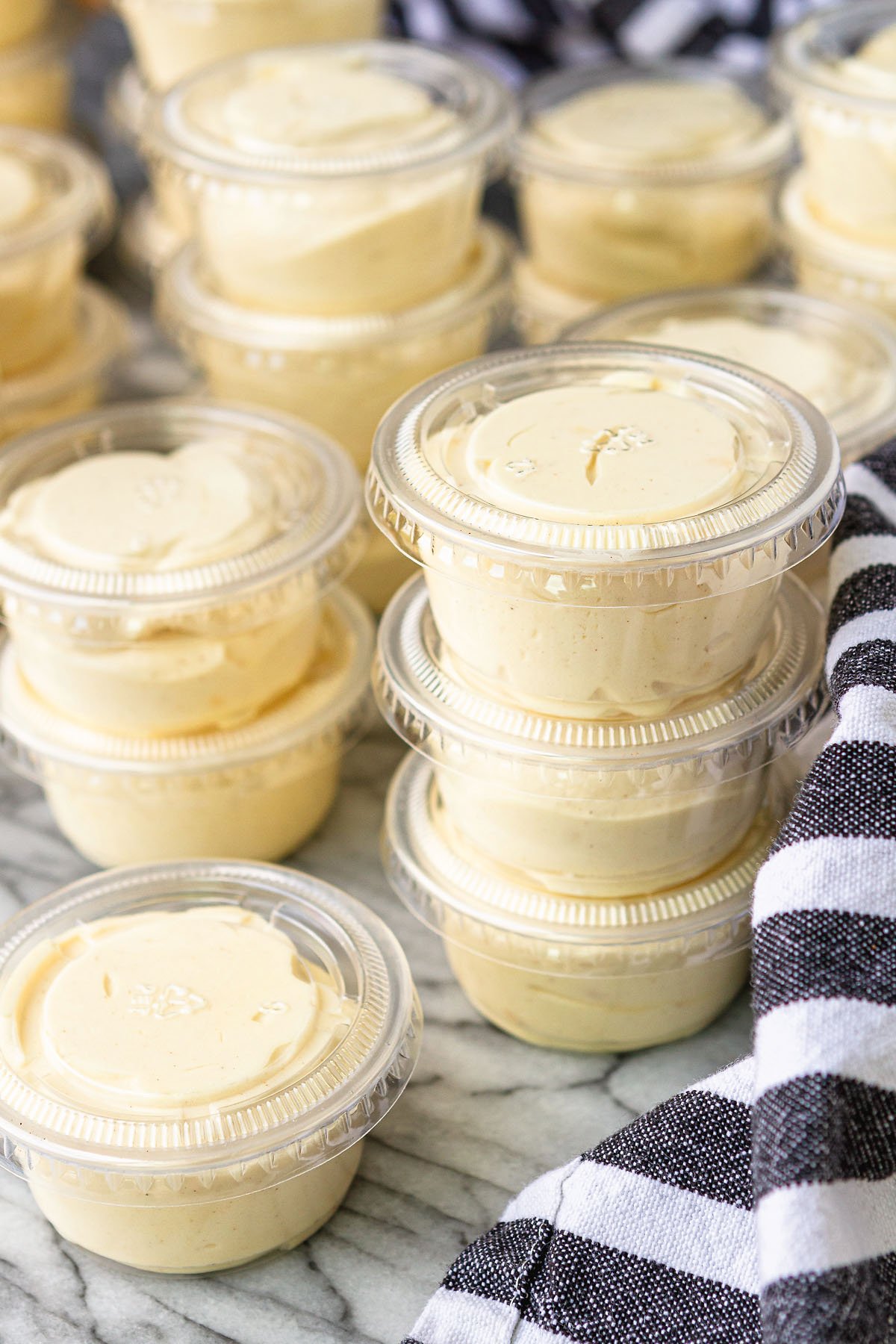 Oh, and you’ll also want to grab some of these little condiment/pudding shot cups! These disposable shot cups are a way more convenient way to serve up this boozy dessert than dirtying up a boatload of glass or plastic shot glasses.

Most grocery stores carry these small cups with the paper plates and plastic utensils, but they’re actually MUCH cheaper on Amazon. So if you know you’re going to be making pudding shots soon, save yourself some cash and order these cups ahead of time online.

And while you’re at it, I highly recommend ordering one of these medium cookie scoops, if you don’t already own one. I’ll tell you why in just a minute… 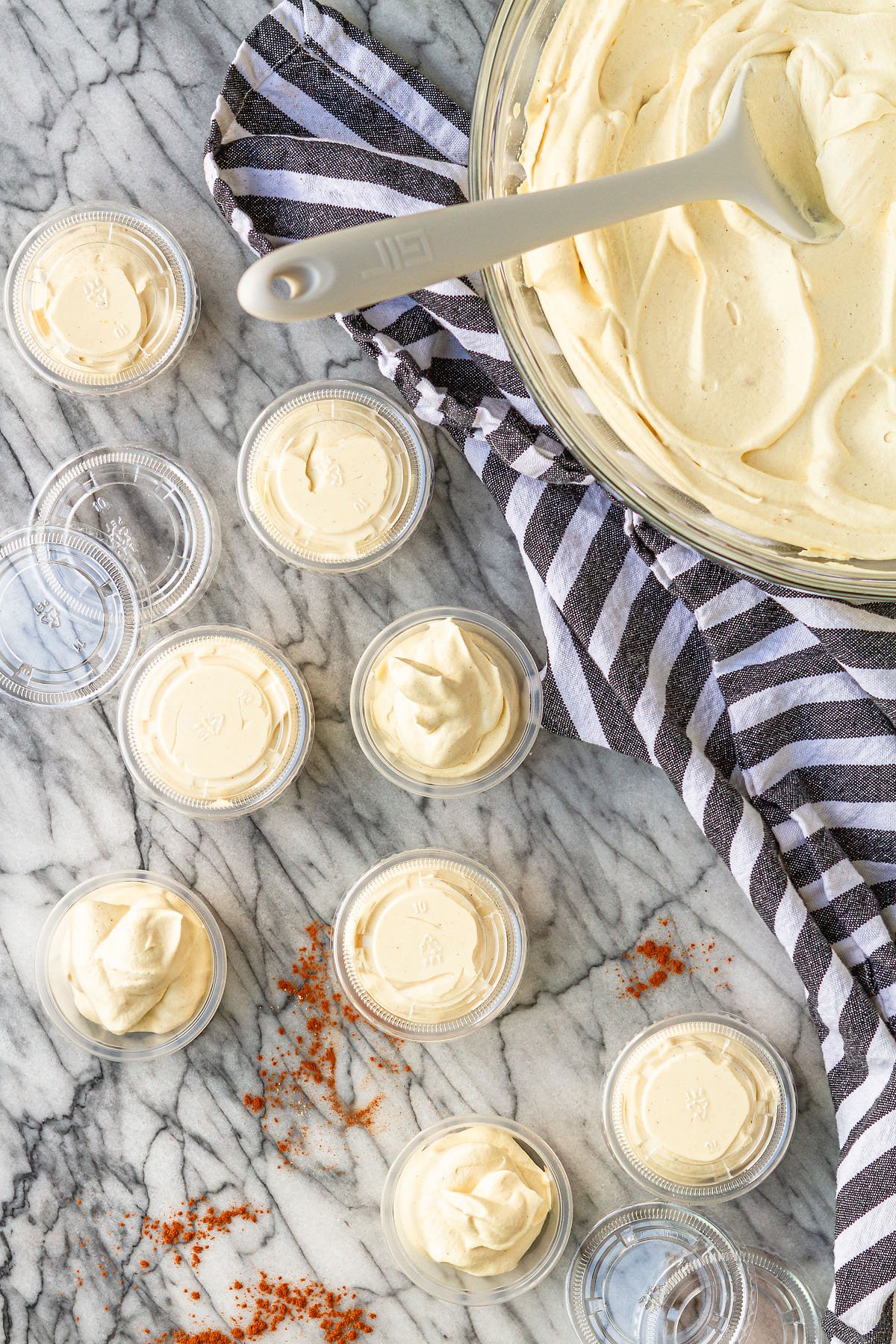 How To Make Pudding Shots With RumChata

This RumChata pudding shot recipe is seriously SO easy to make. After you’ve made them once, you won’t even need the printed recipe! Although you might want to take a copy (or five) with you to the party, ’cause you’re definitely going to be asked how to make these party-perfect RumChata shots (AKA everyone’s new favorite cocktails)…

Anyhow, it’s simply one cup RumChata liqueur, one cup Pinnacle vanilla vodka, and a cup of cold milk mixed with two 3.9-oz. packages of instant vanilla pudding mix, all whisked up in a large bowl. Fold in a 16-oz. container of Cool Whip non-dairy whipped cream and voila!

And here’s where that medium cookie scoop I mentioned comes in. It’s ideal for transferring the RumChata pudding shots mixture into the condiment cup “shot glasses”. One big scoop, plus a little extra dab on top, should be enough to the fill the cup while still leaving a little room for expansion when they freeze. TRUST ME — this task will go so much faster with the right tool. 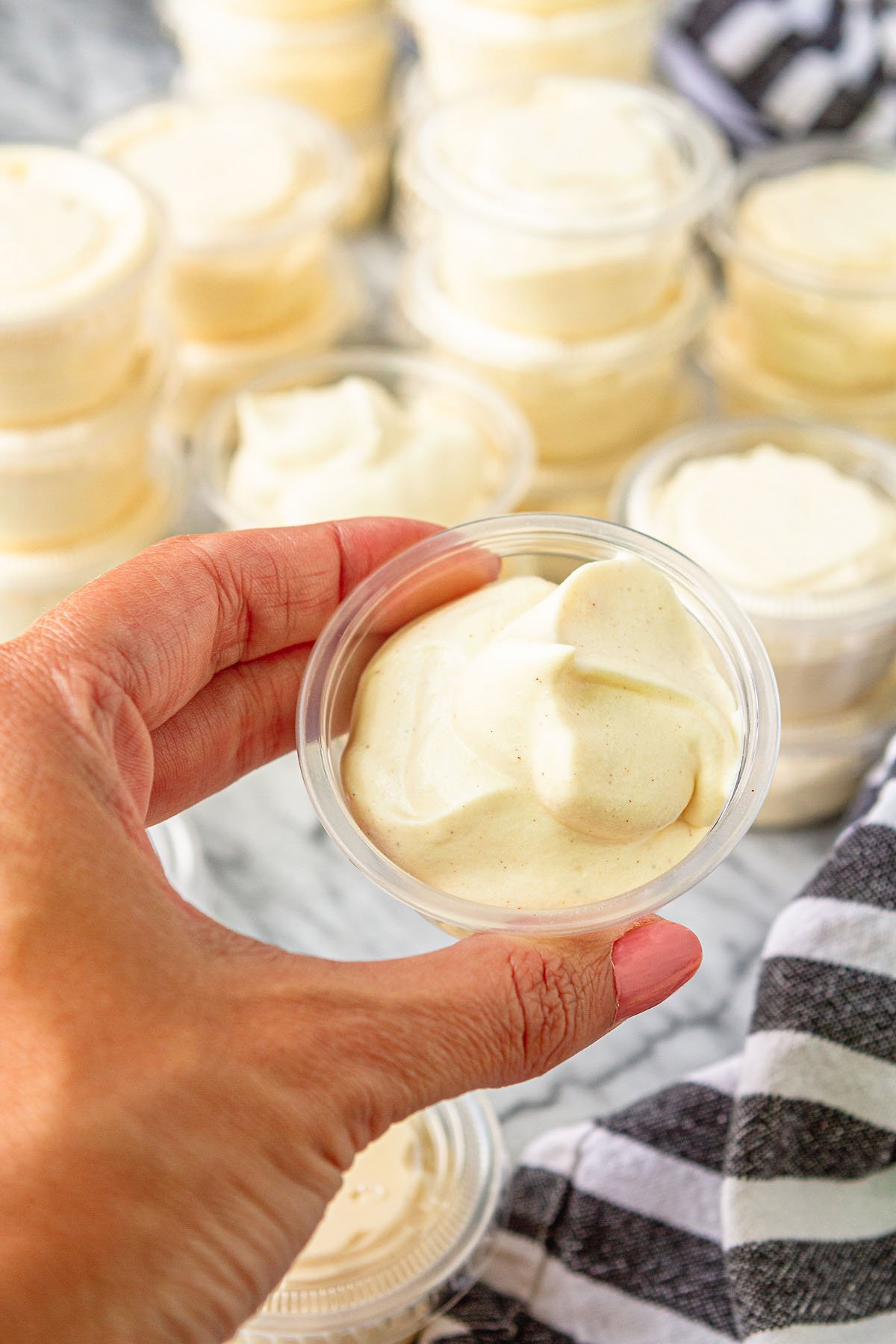 When it comes to serving pudding shots, I actually prefer this creamy cocktail straight from the freezer. But you can also just store them in the fridge or let them thaw a little before serving — totally up to you! And the best thing is, if you’re planning to take them on the go, you can just throw them straight from the freezer into a cooler filled with ice and they’ll be good for the day.

Oh, and if you’re wondering: how long do frozen pudding shots last? Pudding shots with alcohol can be stored for about 2 months in the freezer and about 5-7 days in the fridge. But I can assure you they’re NOT going to be around that long!

PIN IT NOW! CLICK HERE TO ADD THIS RUMCHATA PUDDING SHOTS RECIPE TO YOUR POPULAR COCKTAIL RECIPES BOARD ON PINTEREST!

NOTE: If you prefer a less cinnamon-forward flavor, you can substitute an equal amount of Baileys Irish Cream Liqueur for the RumChata. 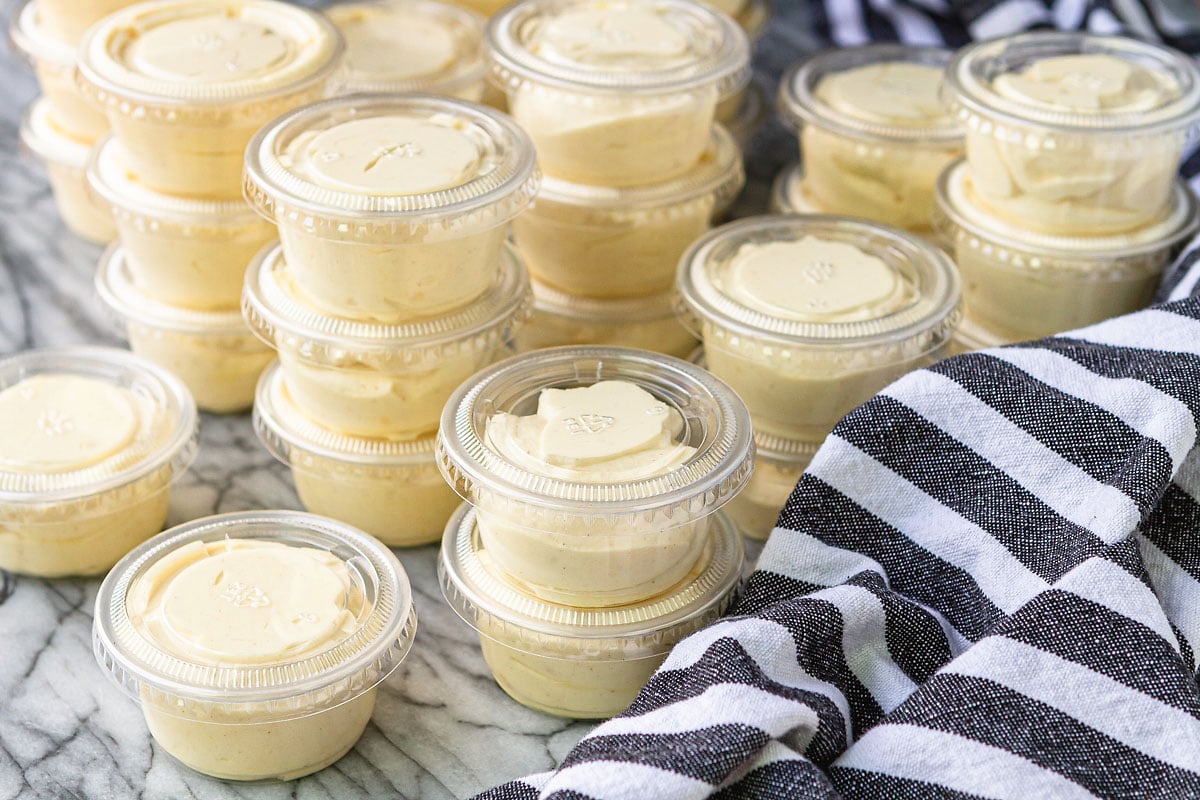 But tell me what other flavors do you think would make the BEST pudding shot recipes? Because clearly you guys are into them and want more, more, MORE! I only want to provide you with the very best recipes, so let me know in the comments.

P.S. This scrumptious vanilla pudding shot recipe would totally make the most fun Christmas pudding shots for the holiday season when sprinkled with some of those little red, green & white nonpareil sprinkles!! Or maybe I should start working on some eggnog pudding shots… Thoughts?

I’d love to see how your RumChata pudding shots turn out… Tag me @Unsophisticook on Instagram or use the hashtag #Unsophisticook so I can check them out. Enjoy!

Can I use this as a topping on a spiced pear cake?

Sure, I'd say so! The texture is still very Cool Whip-like before it's frozen.

How long can they stay in the fridge after you made them?

Hi Sarah! They should last for about 5-7 days in the fridge and up to 2 months in the freezer.

Could I leave out the vodka and use more rumchata?

Hi Rachel -- I haven't tried it, but I don't see why it wouldn't work!

I would love to make a pumpkin version of these but the pumpkin pudding isn't available in my area. Any idea on how to do that?

Hi Savannah! If you google "pumpkin spice pudding", there are a few recipes that use vanilla pudding mix, pumpkin spice, and pumpkin, but I'm honestly not sure if it would be a viable substitute. It seems like the canned pumpkin would make the pudding much thicker, which would probably change the texture. The mix is limited edition, so it may just not be widely available for purchase in stores yet. They are available on Amazon right now, though!

This was my first time making pudding shots. I followed your instructions in order but it seemed like my mixture was runnier when I poured it into the cups than what appears in your pictures. Should I have let the pudding/milk/rumchata/vodka mix set for some time before adding the cool whip? I know they'll still taste great but wanting to perfect for next time! Thanks!!

I actually had this happen once, and I’m pretty sure it was due to overmixing because the Cool Whip was not completely thawed. So make sure your Cool Whip is completely thawed, and be gentle when folding making sure to mix thoroughly but not over mix. Hope that helps!!